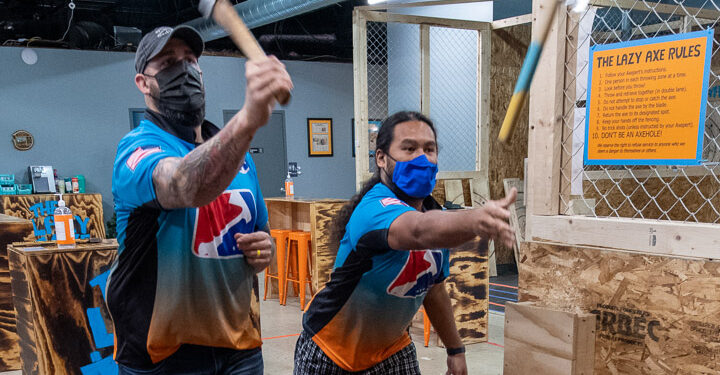 COLONIE — “Being one of the best in the world at anything is pretty amazing.”

The quote was from Gary Dayter, after he and Mark Mirasol returned from competing in the World Championship Axe Throwing competition in Atlanta to compete for $50,000 in cash prizes, the largest purse of money in the burgeoning sport’s history.

“It was a strong showing for our first major tournament,” said Mirasol, who owns the Lazy Axe with his wife Kristyn, who was a judge at the championship tournament on Dec. 4 and Dec. 5.

It may be the first, but it won’t be the last as the sport is the newest “thing.”

A variation of the axe is one of the Homo Sapien’s first tools and it is a documented weapon throughout history. It’s not clear when the first axe was actually thrown — either as a weapon or a tool to kill animals for food — but some say it was as early as 400 A.D. Likely, the first axe competition was not far behind.

Lumberjack competitions have been going on for centuries and that always includes some sort of axe play. The modern urban axe throwing sensation stated in Canada about a decade ago in Canada and follow some of the same techniques as the lumberjacks, but the axes are a little smaller and the “arena” is a more controlled environment.

There are two major entities that have standardized axe throwing, the World Axe Throwing League, where the Lazy Axe throwers belong, including Dayter and Mirasol, and the International Axe Throwing Federation.

In 2018 ESPN aired the World Championships for the first time and then the sport took off in the U.S. There are now 300 WATL affiliated facilities around the world and there are three axe throwing facilities in the Capital District.

On Dec. 13, ESPN showed the finals of the latest Axe Throwing World Championships and while the efforts of Dayter and Mirasol just missed making it on national TV, they said it was pretty neat seeing axe throwing getting the exposure.

It’s not like too many parents are going to put an axe in their youngster’s hands and allow them to throw it around the back yard, so it is likely most axe throwers got a start later in life.

For Dayter, a Scotia resident, he saw his neighbor throwing tiny tomahawks into a stump and went over and started throwing too. He bought his first axe not long after that and started throwing, realized he was pretty good at it and ended up throwing at the Lazy Axe where he signed up for league play and is widely considered the guy to beat.

“Now I am going to the worlds and competing with the best axe throwers in the world,” he said. “Being one of the best in the world at anything is pretty amazing and to have so much fun doing it … I’m not stopping anytime soon.”

Mirasol and his wife were on a road trip in Kansas and were trying to find something to do “in the middle of nowhere.”

They found an axe throwing facility that had just gotten permission to open but wasn’t open to the public yet. They talked the owner into letting them toss a few and while he was admittedly “terrible” at it, he was hooked.

“We had enough fun so when we came home we started looking for ax facilities and there wasn’t any within two hours of the Capital District so we set up a target in the back yard,” he said. “I studied videos and was very cerebral about it at first to figure out how to do it properly and once I got into it, I was hooked and we opened up the lazy axe a short time later.”

The Lazy Axe opened in July, 2019 and it was going well until the pandemic turned everything upside down. Before COVID, they were getting between 100 and 150 people steadily filter through the facility on a Saturday and that was a perfect number to make a profit and keep things safe.

Because of COVID, the state forced the facility to shut down in the spring and since re-opening in July with all the appropriate precautions in place things have been slow. Leagues have started up again, though and many of the old crew did come back.

“We call it our axe family,” Mirasol said. “It kept our motivation up to keep going and our motivation to bring more people in. We are cautiously optimistic about 2021.”

There are recreational players who come in once in a while to relax and blow off some steam or have a few laughs and then there are the competitive leagues who adhere to the WATL guidelines and rules.

Axe throwing follows in the way of some bar room sports like darts and pool, but has dash of bowling. Unlike some other facilities, the Lazy Axe does not sell or allow alcohol and it is all about the sport.

“The Idea behind the Lazy axe in name and aesthetics is we try to make it as accessible as possible,” Mirasol said. “We have people say I can’t believe other places serve alcohol while doing this because I don’t trust myself. There is a level of safety. With axe throwing there is already a perceived fear of danger. We try to make it as accessible and make it less intimidating and not have the hyper masculine vibe other places give off.”

Nearly half of his league members are women, he said, and his wife Kristyn is one of the top throwers at the club and was a ref at the world tournament.

“We have had more bachelorette parties here than bachelor parties,” he added.

It’s a competitive atmosphere, he said, but also a supportive one with those on opposing teams encouraging their rivals. Even at the world competition, he said, one team had their car broken into and all their axes were stolen. Rather than write the team off as one less to worry about, some 40 other teams offered up axes so they could still compete.

“At worlds and in house, you really only compete against yourself,” he said. “You can only control what you do and not what your opponent does.”

The big axes and hatchets have to be a certain length and weight for competitive play and Dayter ground down the head of his big axe so it meets specifications. While there are different games, like cricket in darts, the basic WATL game has each thrower getting 10 turns with each section of the board representing a value. At the end of 10 tosses, the one with the most points wins.

The Lazy Axe charges by the hour and a session with a neophyte comes with an “axepert” who provides a safety demo, a lesson on how to throw and how to runs the games.

“There is a different vibe here, a more laid back, relax and have fun,” Dayter said. “If anyone is thinking about trying something new or different it is a good time.”

SIRSY livens the season with a holiday-themed stream