SIRSY livens the season with a holiday-themed stream 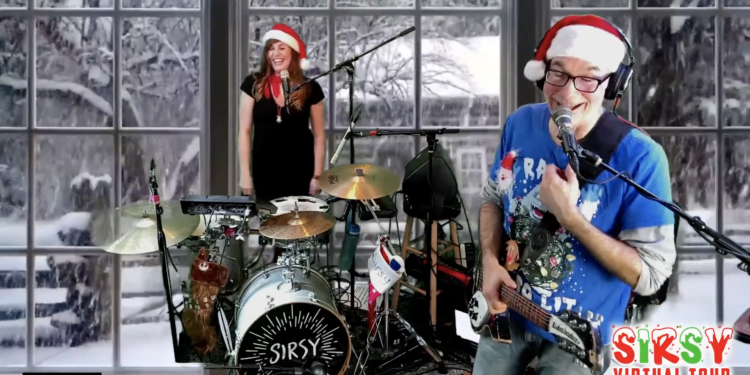 The married musician aficionados have been using live streams to supplement their incomes since the pandemic first hit in March. Melanie Krahmer, the duo’s lead singer, drummer and a million-other-instruments player, is quite an act alone, only to be infinitely more powerful with Richard Libutti, SIRSY’s guitarist and resident pedal worker.

To watch the stream, visit https://bit.ly/2WGbr3A.

During the 67-minute show, Libutti and Krahmer delivered oodles of holly-jolly holiday cheer with fun takes on Christmas tunes and quite a few cheesy (and sardonic) dad jokes.

How many lead singers does it take to change a lightbulb? One. They stand there and hold the lightbulb as the world revolves around them.

What do you call a guitarist with a mortgage? An optimist.

What do you call the three people playing in a band with the drummer? Musicians.

Krahmer and Libutti are known for their dynamic. The couple is not afraid to take a few well-intended shots at one another. As they switched instruments and changed the green screen, which featured at least four festive backgrounds, Krahmer joked about turning off her snare drum and Libutti tried to remember which pedal turned the Rudolph animation on.

I was particularly impressed with SIRSY’s rendition of “You’re A Mean One, Mr. Grinch,” the classic tune from “How The Grinch Stole Christmas.” I’ve found in the past that some take the song too seriously, or the shenanigans that ensue overpower the song. Krahmer’s voice is extremely strong, almost visceral at times, and she used it well on the lyrics that benefit from such emphasis. Libutti also brought his game, shredding a solo with a drumstick (yes, you read that right) which made my jaw drop. As Krahmer handed him the drumstick before pulling out one of her backups, both flashed a look of mischief; while I would never think to play a guitar solo with the use of a drumstick and some pedals, Libutti executed it brilliantly and reaffirmed how much of an equal he and Krahmer are, in both talent and life.

I also enjoyed the “smoky jazz club” version of “Santa Baby,” a haughty, tongue-in-cheek nod to the likes of Eartha Kitt’s hit rendition. Krahmer and Libutti used technology to their benefit here, cloning themselves so it was a group of four people. While Libutti rocked a couple of sweaters and let his guitars do the talking, Krahmer double dutied singing and drumming, with her singing counterpart draped in a feather boa. I found myself laughing and actually singing along, a feat for someone who genuinely despises all things “Santa Baby.”

The show, one of the last ones for SIRSY in 2020, is a hallowing reminder of what full-time musicians are forced to do to feed themselves. As Krahmer is a survivor of breast cancer, she is considered at a higher risk for catching the coronavirus than the general population; this has forced SIRSY to get crafty and maximize their platform. While SIRSY has always had a cult following, even in the best of times, the live streams are a testament to how much more of a hill musicians and artists have to climb when their income is no longer able to rely on the congregation of mankind.

Albany Center Gallery asks everyone to Aid the Arts