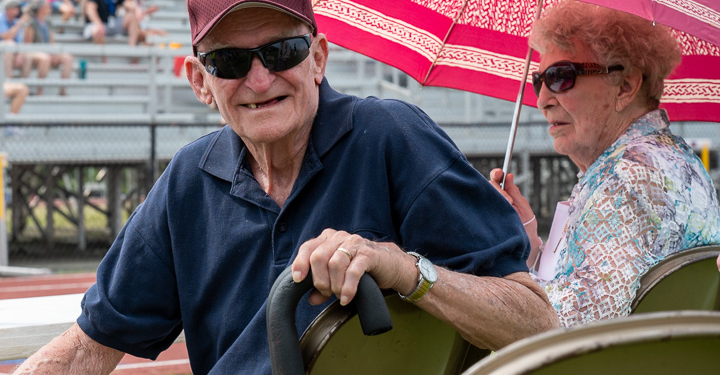 Harry Koch and his wife at the track meet that now bears his name on Saturday, May May 22 (Jim Franco/Spotlight News)

COLONIE — It’s been a tradition for 55 years. And now it has a new name. The Colonie Relays will now be called the Harry Koch Relays after the man who founded the storied meet.

Koch started the meet in 1966 when he was a track coach at South Colonie and it has evolved into one of the most anticipated of every spring season with schools from all over Section II attending.

“It’s just fantastic. I never thought I would be here to see this. I’m glad to see all the participants. That is what the meet was designed for, so everybody could come and participate. I’m really pleased,” Koch said while sitting at a table by the timers booth with his wife.

He said when the meet first started it was a dirt track and it had to be dragged and rolled and constantly maintained. Now, Colonie, like most high schools, have a synthetic track that is maintenance free and a lot faster.

“The track is beautiful now. It’s a lot better than the first one we had and there are a lot more participants now than when we first started,” said Koch, who started at Colonie as a coach in 1958. “I am happy to have contributed to it.”

“He certainly deserves it. There is nobody who worked harder than him. He used to carry four hurdles to set them up for the runners,” said Frank Myers, the indoor and cross country track coach for 52 years.

Like all athletic events, and everything, the meet has evolved over time. When Koch started it, it was a boys only event but girls have been running it for years and there are more participants and more races.

“It’s unique, it has distances the kids don’t get a chance to run in other track meets,” Myers said. “That’s why the kids like this meet because it gives them a chance to try some different things. It has more of a team aspect of it.”

The relays were started by Koch and his assistant at the time, the legendary cross country coach Eddie Springstead. Years ago the latter went Shaker High School, where he is still involved with that school’s track program, while Cook stayed at Colonie.

The up and coming coaches readily give a nod to those who set the stage for Section II track.

“It’s an honor to continue the legacy. I coach with Frank Myers and I want to keep the tradition of Colonie track and the coaches alive,” said Lavaughn Garland, who is coaching his first girl’s track team this season. “Everything from the technical aspects and lining up the athletes and making the runners feel good about a meet a day before, two days, before a meet.”

The former Colonie high student athlete would have had his first season last year but it was cancelled because of COVID. The pandemic is still having its say on Section II athletics and the Colonie Relays. Rather than at the same time, like in years past, the girls competed in the morning and the boys in the afternoon.

“Seeing it from a coach’s perspective is different. I never realized it was so much work but it’s worth it,” he said. “It feels good to be here, at this event in particular, and interact with all the other coaches across Section II. You get to see all the athletes and see them get medals and have fun with each other and lean something different and realize the strengths they didn’t know they had.”