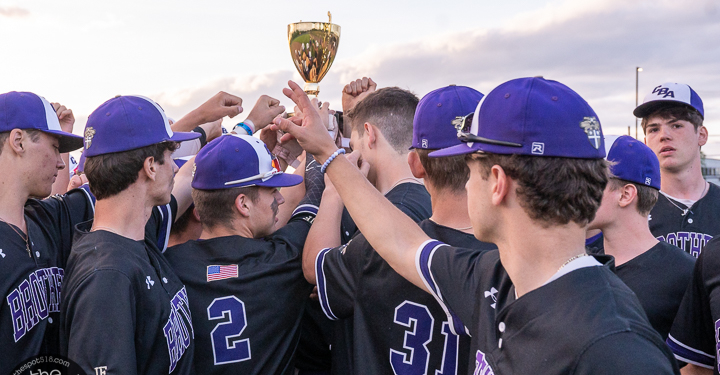 LATHAM ­– Shaker scored 20 runs in what turned to be the Colonie Cup championship game — and it wasn’t enough.

The Bison would have had to beat CBA by 11 runs in the round robin style tournament between the town’s three high schools, and the Brothers scored 16.

To say it wasn’t a pitcher’s duel is an understatement. It was more like a pitcher’s slap fight. But, now in its third year — fourth if you include last year’s cup which was canceled because of COVID — the three games played on Sunday, May 23, were non-league and Section II teams are gearing up for the final regular season stretch and then sectionals.

So, CBA, Shaker and Colonie were likely holding back their best arms. Or, if they did use the best, the arms were tired from the condensed, flurry of a 2021 spring season where they played some 20 games in 30 days — or maybe they were tired from the Sunday’s tournament, which began at 11 a.m. and didn’t wrap up until nearly 8 p.m.

Either way, it wasn’t a defensive battle. All told there were 16 homeruns and 11 extra base hits on the day — 13 dingers in the final game between CBA and Shaker alone.

Colonie won the first game by beating its cross town rival Shaker 6-5 but lost the second game to CBA 11-2.

That set up Shaker and CBA in the final game and with the differential, Shaker would have had to win by 11 runs to make up the nine-run CBA-Colonie spread and the one-run difference in game one. A ten-run win by Shaker in the final would have ended the tournament in a tie.

But the CBA bats put any question of that to bed.

There were 27 hits racked up by the two teams in the final game.

Out of an abundance of compassion, the pitching stats will remain unpublished except to say Jake Daniels got the win for Shaker at home (which wasn’t really a win in the grand scheme of the day) and Lilley took the loss, but his team took home the Colonie Cup.

In game two, Luke Szepek went 2 for 2 with two home runs and four RBIs to lead the CBA over Colonie while eight other Brothers had hits. Colonie could only muster four hits on the day with PJ Parisi going 1 for 2 with an RBI.

Owen Goodridge got the “W” for CBA while Billy Huff took the loss for Colonie.

In the first game of the day, which was the most competitive, Shaker jumped out to a 2-0 lead after one, Colonie came back with four runs in the second, Shaker scored two in the top of the third and another an inning later to tie it at five. But Colonie scored on a bases loaded walk in the bottom half of the fifth which turned out to be the game winner.

Colonie won the first Colonie Cup in 2018 and Shaker won it in 2019. It was cancelled last year because of COVID and now all three of the town’s high schools will have their name etched on the Cup.

SPOTTED: Bethlehem girls shut out Saratoga, and then shut out Shen