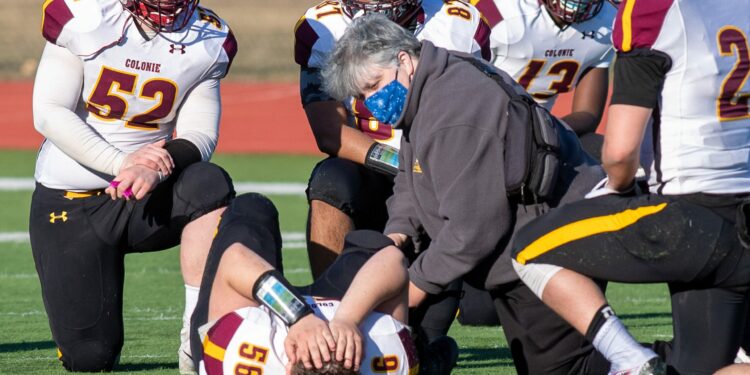 COLONIE — It takes a village to cultivate an athlete’s success.

You have the athlete themself. You have the family, who often sacrifice as much as the athlete does to foster that winner’s mentality. Friends, colleagues and —sometimes — fans can serve as outside motivation to keep going.

You also have the athlete’s team, which usually consists of coaches, doctors and trainers. There’s one particular trainer on that force who provides an unmatched dedication to the detail-oriented health qualifiers that each athlete must meet — the athletic trainer.

The name doesn’t do the position justice. Athletic trainers are highly qualified, multi-skilled health care providers who work under the supervision of a physician and provide prevention, emergency care, therapeutic intervention and rehabilitation of injuries to athletes in all levels of sports – from high school and secondary school all the way to the NFL. They work with the athletes to manage everything from asthma attacks to diet to heat illness, and now, COVID-19. Sports injuries are an ever-present danger and the immediate response from an on-site athletic trainer can be critical in recovering from that injury.

Aimee Brunelle is South Colonie High School’s athletic trainer. She’s worked with college athletes, so she knows what it takes to bring forth the highest level of success. Despite her extensive training, her goal remains simple: keep her athletes in the game as much as they can healthily be there.

“So many student athletes are so terrified of coming in because they don’t want to be taken out of the game, despite the fact that they might have an injury or condition that needs medical attention,” Brunelle said. “None of us want to take you out of the game. What we want to do is mitigate current issues so you have a better time playing and, in the future, a better chance of being active once your athletic career ends.”

Brunelle’s expertise ranges. She sees overuse injuries frequently, a feat she chalks up to student athletes still learning their body’s boundaries. College athletes tend to have a more fine-tuned awareness of their body’s stressors and seek help sooner, where high school sports stars are still learning the grind that the levels above them demand. The culture of high school sports and the “warrior mentality” around them doesn’t help overuse; between the roaring Friday night crowds, impressing friends and love interests, proud parents cheering them on and the adrenaline rush of scoring the winning points under the shine of artificial lights, the feelings that come from being on the field are unmatched.

“What we see in high school-aged athletes is the constant change of their bodies since their bodies are constantly trying to catch up with their growth,” Brunelle said. “Puberty is behind them, but their muscles are still growing and their brains are still pickling, which means it’s imperative we teach the proper way to care for injuries and the proper way to attack sports from the get-go.”

Arturo Flores, president of the New York State Athletic Trainer’s Association, agrees with Brunelle. In the 15 years since he’s been certified, he’s noticed a shift in the perception of athletic trainers.

“People used to joke we were the team’s water and towel boys,” Flores said, “and it’s becoming more apparent to the world that we are legitimate health care providers.”

Flores and Brunelle said the beauty of the athletic trainer’s knowledge lies in their ability to bring forth the best care. Brunelle often has athletes lining up around her corridor and manages around 800 athletes per year. She and Flores are able to quickly gauge the severity of an issue and, if needed, get the best minds in the area on the roster.

“We can call a physical therapist and get an athlete in tomorrow if we need to,” Flores said. “If an athlete is showing symptoms of mental distress, we can put them in touch with professionals to tackle those issues.”

The role of an athletic trainer is as much a mental flag as a physical one; the mental health of athletes is a study that science is no stranger to, and the pressures of performance can quickly affect other parts of the game and the body.

“I always say if you can give 100 percent of what your body is capable of that day, you’re ok,” Flores said. “Different days will be different levels of ability, but the ability to bring your full attention to the field is what we’re looking at.”

As March is Athletic Trainer’s Month and all levels of sports are beginning to play, Brunelle and Flores hope the community understands the importance of having an athletic trainer work with a team. While professional teams always have the resource, many secondary school teams are not so fortunate.

“I have kids always apologizing to me for making me busier,” Brunelle concluded, “but this is my job. I want them to come see me. I want them to feel confident enough to know I’m here to help them, not here to keep them off the field.”