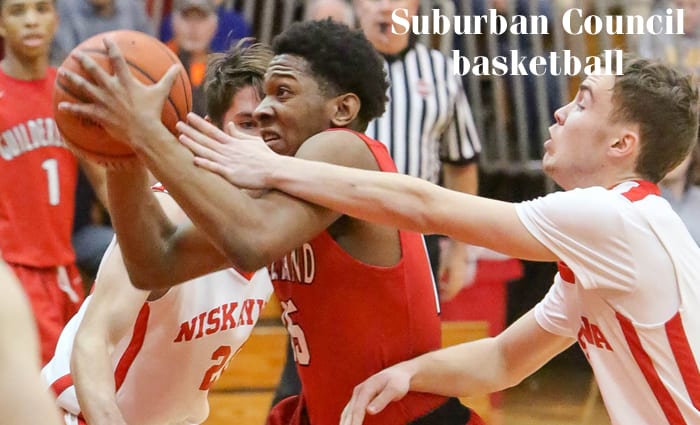 Shenendehowa 60, Guilderland 53
Guilderland (2-2) allowed a 10-point lead to slip away in the second half, as Shen (4-0) rallied for the victory. For more details and a photo gallery from the game, click here.

Bethlehem 66, Shaker 54
A bad second quarter didn’t faze Bethlehem (3-1). After Shaker (3-1) went on a 15-5 run to take a 28-26 halftime lead, the Eagles outscored the Blue Bison 40-26 in the second half to earn its fourth straight win. Sean Flynn had the hot hand for Bethlehem, as he led the way with 19 points. Sloan Seymour netted 17 points for Shaker.

Saratoga 73, Colonie 65
The bloom may be off the rose for Colonie (2-2) after it suffered its second straight loss. Saratoga (3-1) outscored the Garnet Raiders 21-11 in the fourth quarter to rally for the eight-point victory. Adam Anderson poured in 29 points, and AJ Lawton added eight of his 13 points in the fourth quarter to spark the Blue Streaks. Isaiah Moll had 19 points for Colonie.

CBA 55, Burnt Hills 45
The best cure for what ailed CBA (1-3) over the first three games was a meeting with winless Burnt Hills (0-4). The Brothers jumped out to a 22-9 lead after the first quarter, and they held on the rest of the way to break into the win column. Jordan King (14 points) and Scott Trobridge (13 points) paced CBA, while Kyle Fisher led Burnt Hills with 23 points.

Albany 55, Ballston Spa 52
Albany (3-1) nearly blew a 17-point lead in the fourth quarter, but had enough to hold on to edge Ballston Spa (2-2). Hamadi Gaddy and Jacorey Nixon each scored 13 points for the Falcons, while Ryan Salerno netted 16 points for the Scotties.

Niskayuna 44, Columbia 41
Niskayuna (2-2) doesn’t win pretty, but it’ll take any win it can get in the Suburban Council. Alex Ritzenhaler netted 19 points for the Silver Warriors, who outscored Columbia (0-4) 28-18 in the second half to pull out the victory. Liam Danaher and Justin Pangburn each scored 10 points for Columbia.

Schenectady 67, Averill Park 54
John Ryals continues to be Schenectady’s go-to guy. Ryals scored a team-high 23 points to help the Patriots (4-0) pull out a victory at Averill Park (1-3). Ryan Long drained four three-pointers on his way to an 18-point night for Averill Park.

Troy 73, Mohonasen 51
Mohonasen (0-4) crossed the 50-point barrier for the first time this season, but its defense couldn’t hold back Daniel Buie (26 points) and the Troy Flying Horses (2-2). Duncan Tallman had 19 points for the Mighty Warriors.