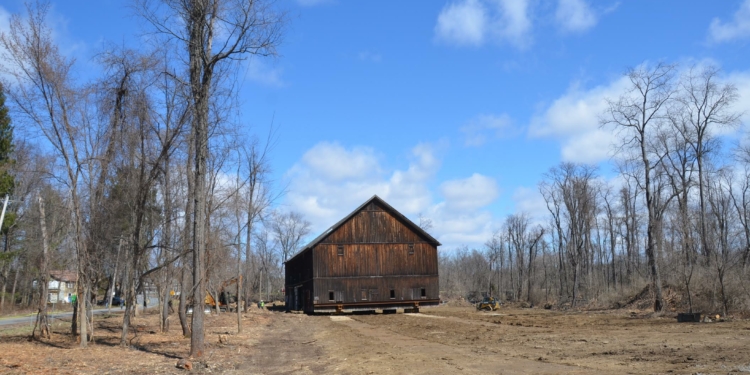 NEW SCOTLAND — On Wednesday, Dec. 14, the New Scotland Town Board officially approved the creation of the Captain Joseph Hilton Town Park, the new home of the historic Hilton Barn. The creation of the park is the result of a multi-year collaboration between town government, citizens, the Mohawk Hudson Land Conservancy, and donors Peter and Barbara Kelly and Jennifer Hilton. The park, which will provide an attractive setting for the Hilton Barn, will also enhance the Albany County Helderberg Hudson Rail Trail by creating a new recreational and educational destination for pedestrians and cyclists.

The Mohawk Hudson Land Conservancy was approached by Town of New Scotland officials in early 2015 for assistance in finding a new location for the historic barn, which was threatened by an expanding housing development. When they began the search, they discovered that Hilton family heirs still owned land across Route 85A from the former location of the barn and next to the ACHH Rail Trail. MHLC Executive Director Mark King said that he recognized an opportunity to enhance the ACHH Rail Trail while also protecting vital green space and local history. MHLC facilitated the purchase of the 1.1 acre site, finalized in March 2016.

“The area surrounding the new park is undergoing rapid development; more than 200 houses are planned or being constructed within a mile of the property. This park could be one of the few open spaces left in the area. The Hilton Barn and the green space protected by the park will be a visual reminder of the Town’s agricultural history,” said King. “This project would not have been possible without the exceptional donor generosity of Peter and Barbara Kelly and Jennifer Hilton.”

“Preservation of this barn is important to me in so many ways,” said Jennifer Hilton. “Built by my great Grandfather, Captain Joseph Hilton, it is the last vestige of the Hilton Farm. It is also an important landmark heralding New Scotland’s agricultural heritage. My hope is that this structure becomes a town focal point for many to enjoy now and in the future. Many thanks to the Mohawk Hudson Land Conservancy, the Town of New Scotland and all who have worked so hard to make this a reality.”

The park, located on a 14-acre parcel at the intersection of Hilton Road and Route 85A in the Town of New Scotland, expands upon the current 1.1 acre site, which was acquired by the Mohawk Hudson Land Conservancy earlier this year and donated to the town for the relocation of the Hilton Barn. The historic barn, constructed in 1898, was built primarily for hay storage at a time when horses were the primary means of transportation and, at approximately 60 x 60 x 120 feet, is believed to be the largest post and beam structure still standing in Albany County. It was moved to its new location in early April and finally lowered and mated to its new foundation in early November.

“The Hilton Barn is a spectacular example of what could be constructed by one family with a grand vision in a bygone era, when wood and slate were abundant. Its loss would have been a catastrophe for our community,” said Peter Kelly. “My wife Barbara and I hope that the purchase of the 14-acre parcel, with the major contribution from Jennifer Hilton, will make it possible for the Town of New Scotland to develop the land into an imaginative park, which will integrate the Barn with the Albany County Helderberg Hudson Rail Trail. We wish to thank the Mohawk Hudson Land Conservancy for their efforts to help save the Barn, when so many times it was on the verge of being destroyed.”

“The town is grateful for the generosity of the Hilton family, private donors, and the efforts of the Conservancy,” said New Scotland Town Supervisor Doug LaGrange. “With the addition of 14 acres of parkland, the Town will have the space needed for a community meeting place and recreation area—centered around the Hilton Barn and Rail Trail. The Hilton Park will be a destination not only for residents of the Town but visitors from all over the Capital District using the Rail Trail. With direct access to the trail, visitors will have a place to rest, picnic, and enjoy the historic barn. It is our hope that the park, and the Hilton Barn, will be a community meeting place to bring residents together and enjoy the history of the area. The Town’s planning process identified this area as the perfect location for a park. Thanks to the efforts of private donors and MHLC, we have now achieved that goal.”

The Mohawk Hudson Land Conservancy (MHLC) is a nonprofit conservation organization working to preserve the natural, scenic, agricultural and cultural landscapes of the Mohawk and Hudson River valleys.

In 2017, MHLC will celebrate its silver anniversary and over 25 years of conserving land in Albany, Montgomery, and Schenectady counties. Since its founding in 1992, the Conservancy has protected nearly 5,000 acres of land, including over 2,000 acres open to the public for hiking, cross-country skiing and other educational and recreational opportunities. MHLC also manages more than four miles of the Albany County Helderberg Hudson Rail Trail through an agreement with Albany County.