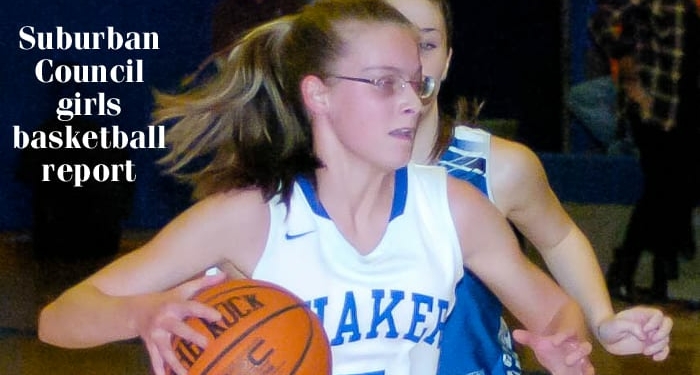 One more Suburban Council girls basketball team fell from the ranks of the undefeated during action on Friday, Dec. 16. Here’s a look at what transpired.

Shaker 52, Bethlehem 40
Shaker (4-0) outscored Bethlehem (3-1) 33-21 in the second half to remain undefeated. Sierra “CeCe” Mayo led four Blue Bison players in double figures with 15 points, while the Kirby sisters – Maggie and Molly – each scored 13 points to pace the Lady Eagles, who suffered their first loss of the season.

Saratoga 65, Colonie 53
Saratoga’s Dolly Cairns (26 points) and Kerry Flaherty (23 points) proved to be too much for Colonie to handle. Aliyah Wright had 18 points for the Garnet Raiders (1-3).

Albany 63, Ballston Spa 37
A 16-4 run in the second quarter broke the game open for Albany (1-2). Imani Harris led a balanced attack for the Falcons, while Jordan Hipwell scored 22 of Ballston Spa’s 37 points.

Columbia 53, Niskayuna 34
Two of the top players in the Suburban Council squared off in this match-up. Columbia’s Selena Lott, who is headed to Marquette University next year, had 24 points for the Blue Devils (4-0), while Olivia Owens scored 18 points for Niskayuna (1-3).