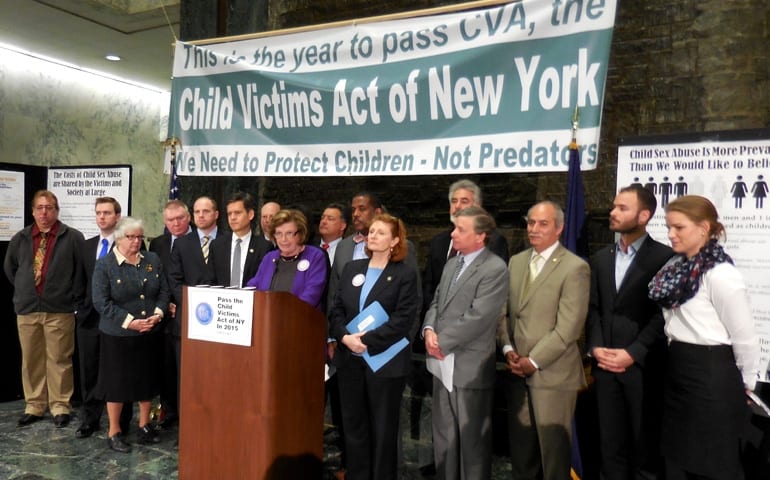 Do you support a statute of limitations?

I am a champion of this issue. This is one of the largest issues of my campaign. It is absolutely deplorable that many in my party, and some in the Democratic Party, including my opponent, have opposed this act and support the statute of limitations. For years I have followed this, and early this year I made it a key component of my campaign when the act failed. I am the only Republican candidate in the entire state fully endorsed by the Fighting for Children’s PAC, which is a driving force in the state to get this bill passed. Why? The data is so clear. One in five children are sexually abused in NYS. Data shows it takes north of full two decades for many to feel comfortable to come forward. By then, even with video evidence of abuse, they cannot seek justice. We also know predators have repeatedly abused children for decades. So if victims cannot come forward after the statute has expired, predators get away with this. My opponent is on record supporting the statute of limitations. This issue disgusts me. We have a need for government to act and I will sponsor this bill and get it passed. I held the first Senate candidate rally in Cohoes in August, speaking on the issue. Since then, dozens of candidates, democratic candidates who I consider friends and will work with in the State Senate and Assembly, have held similar issues. [/quote]

No. It’s immensely important to put yourself in the shoes of the victim. There is an immense amount of fear and shame involved, and it may take them years to have the courage to pursue legal action. Sexual abusers have often been the victim of maltreatment themselves, and this is a tragedy that is passed down from generation to generation. We need to be doing as much as possible to make sure that our families can thrive in a safe environment and to fight abuse and maltreatment. Reducing the stigma surrounding mental health and making sure everyone has access to mental health assistance, and the normalization of seeking these things is extremely important to me.  [/quote]

I do not believe that the current statute of limitations is long enough for victims of these heinous crimes.  I look forward this upcoming session to working with  advocates, victims and my colleagues in the Legislature to find an agreeable solution so victims can seek and find the justice they deserve. [/quote]

This proposal would allow child victims of sex crimes to have their day in court, without being subject to absolute dismissal as per the statute of limitations. A statute of limitation (“SOL”) can be an absolute defense to an action which seeks damages as a result of wrongs allegedly committed. Under existing law, a civil action may be brought against the perpetrator of a sex offense against a child within five years calculated from the time the child turns 18 meaning the claim must be commenced by the time the victim turns 23. Additionally, a victim currently has until the age of 21 to bring any negligence-based claim, against, for example, an employer of the abuser. The Assembly has carefully considered a number of similar proposals concerning this subject matter over the years, and passed a bill extending the SOL for child sexual abuse in 2008. [/quote]

Yes.  Statutes of limitations are fundamentally about fairness.  It is not fair for people to come out of the woodwork to claim they were abused after a long time of staying quiet because the evidence for or against such allegations no longer exists.  Without a statute of limitations, such allegations can be used to target people that others may not like for some other reason.  Like any legal case, not all cases that are brought are legitimate. [/quote]

If so, do you think six years is long enough?

Eliminate the statute of limitations. There is no statute on murder. There is no statute on parking tickets! But sexual abuse is murder of the soul. It’s a moral and economic issue, when you consider the devastating mental health consequences that arise. Allow the one year look back window. If a victim has real evidence, they deserve their day in court, even if it took them time to come forward. [/quote]

No.  I have supported increasing the statute of limitations to 10 years following age 18 which could be extended in cases of fraudulent concealment of these crimes by perpetrators or employers of perpetrators who seek to avoid liability or persecution. [/quote]