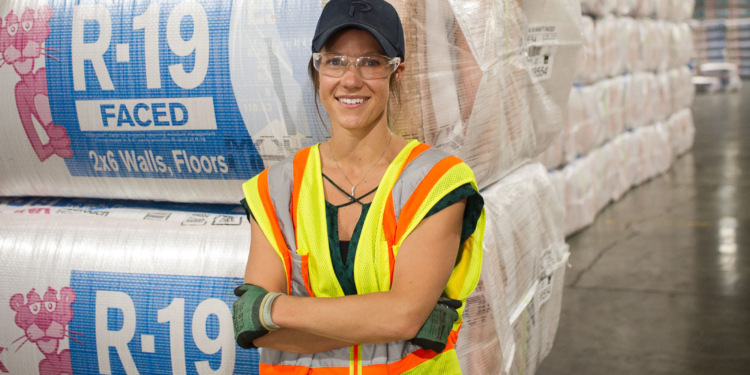 SELKIRK — Described as “a role model for young women,” Casey Griner, 31, has been the plant leader of the Owens Corning plant on 220 acres since 2019.

When she earned the promotion, the company’s CEO called her directly and said she beat his company-wide record for youngest plant leader – he formerly held the title at 29 years and 2 months old, Griner was 29 years and 1 month old when she got the leadership role.

The Bucknell University graduate with a degree in Chemical Engineering says she enjoys the fast-paced environment at the plant which manufactures Owens Corning’s signature pink insulation. The site, located at 1277 Feura Bush Rd., has 250 employees, with 9 percent of that workforce female.

“For me, manufacturing fits my personality. It’s fast-paced, team-oriented, and you can see any changes right then and there,” said Griner, whose first job after college was with Owens Corning in 2012, following an internship at their Santa Clara site in California.

Recruited at a job fair in college, Griner understands the importance of recruiting and also nurturing the future generation of manufacturing, especially as more of the jobs revolve around the employees operating robots.

In her tenure so far as plant leader, Griner has re-energized an apprenticeship program at the plant, and she recently became the chair of a workforce development committee with the Bethlehem Chamber of Commerce.

Griner is working to further the careers of workers at the plant with the apprenticeship program, in collaboration with Hudson Valley Community College.

And workforce development is economic development, explains Maureen McGuinness, who is in her third year as president of the Chamber with more than 400 member businesses.

“One thing we’re charged with at the Chamber is to increase economic development of the Bethlehem Chamber area. If employers can’t find employees, they can’t be a success. They need a robust pipeline of workers,” said McGuinness.

The Chamber serves the area around Bethlehem, Ravena, Coeymans, Selkirk, New Scotland, and Voorheesville and is still forming the workforce development committee, with a main objective to work with larger employers and to also connect local schools with the professional world. The committee is a focus of the Bethlehem Chamber of Commerce’s Foundation, a foundation that was just formed this year, said McGuinness.

“Casey is definitely an asset to the chamber and workforce development efforts, for a variety of reasons,” McGuinness continued. “She’s a role model for young women to see a professional woman working in the manufacturing field and taking a leadership role.”

The Owens Corning Delmar plant celebrates 45 years in the Capital Region this year, with celebratory plans expected later this year, said Griner, noting that there is a notable number of workers who have been at the plant since it opened – making it all the more important to focus on workforce development and apprenticeships.

Griner has worked eight years at the Delmar site, and nine total years with Owens Corning. The Delmar location is one of the only plants in the Northeast to manufacture the pink insulation. The local site was also the first Owens Corning insulation plant to install on-site solar equipment for electric power generation. The solar farm was constructed in 2013.

The plant, one of the largest employers in Albany County, has been recognized by the state for their pollution prevention efforts.

Griner said she loves the team at her plant. “We have become like a family,” she added. “I’m surrounded by people working really hard every day.

She said that team environment is another aspect she enjoys, reminiscing about her time playing soccer in college. “I had a competitive drive but wanted the whole team to succeed – just like my role now.”

She also appreciates the support her own role models and colleagues have given her over the years. “Leaders at Owens Corning are really rooting for you to succeed,” she said.

Griner acknowledges engineering jobs are not as common for women and it takes some confidence to do what she has done. She also acknowledges there are jobs at the plant that she cannot do and she’s glad to have such a great team to work with.

When asked about giving advice to other young women possibly interested in manufacturing, Griner says it’s important to follow your own path.

“It’s more – do what you want to do. Don’t do something because you’re male or female. If it’s what you like and you’re good at it, follow through with that.”

Click on a photo below to view a slideshow of the rest. If you are in a news app click here to view slideshow.