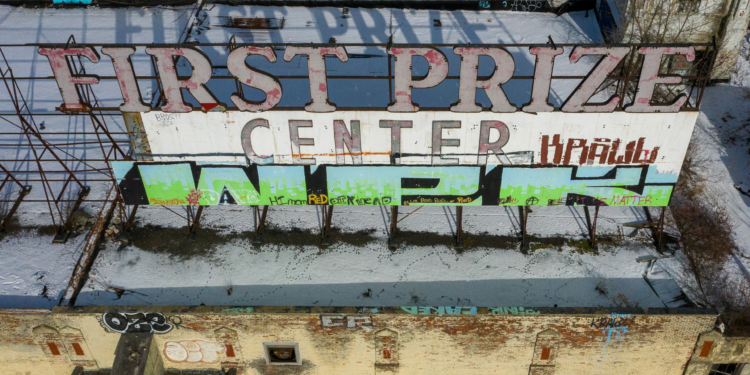 Bill Hoblock, president of Richbell Capital, the Saratoga company that purchased the building, said the proverbial wrecking ball will swing once the asbestos abatement is complete.

“The removal of the eyesore has begun,” he said.

Richbell bought the Capital District’s largest and longest standing eyesore in 2016 from a limited liability company called Exchange Street Associates. ESA bought it from the Albany County Industrial Development Agency in 2015. The IDA bought it from the federal government in 1984 with the high hopes of re-developing the site.

Earlier this year, Hoblock said his company refinanced the purchase and demo costs for $14.4 million. He said the goal is to have the nearly 500,000-square-foot building razed and the site off Everett Road ready for developing by the end of the year.

Jackson Demolition, out of Schenectady, has some equipment and storage and office trailers on site to perform the asbestos abatement. The initial timframe for abatement was three months, but once they begin in a building as large and as old as Tobin’s, things could change.

Initially, the company had visions of a mixed use complex with retail, residential and a possible entertainment component at the 32-acre site. COVID, though, threw a monkey wrench into those plans so what the final product will look like is still up in the air.

Once the main building and outbuildings are down, plans for redevelopment will go before a five-member, joint Planning Board created between the Town of Colonie and the City of Albany.

The meat packing plant opened in 1924 and In its heyday, Tobin’s employed some 1,600 people, most of whom lived in the West Albany neighborhood that straddles the City of Albany and the Town of Colonie. It closed 57 years later and has sat vacant and crumbling since.

How Lansingburgh High School Drama Club responded to the pandemic