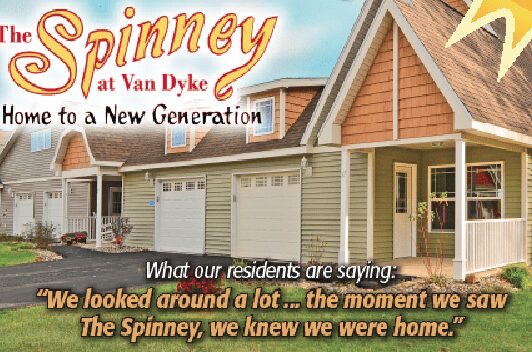 DELMAR — Ground broke last week on two pools in which The Spinney at Van Dyke plan to have opened in time for summer, and up swelled renewed excitement for summer.

“The pools coming in is definitely adding to the excitement for spring and summer,” said Samantha Raynor, director of leasing and marketing at The Spinney Group.

This spring has left something to be desired for outdoor enthusiasts with visions of sun-kissed days at the side of the pool. But, that hasn’t stopped Spinney residents from taking in the scene of earth movers and construction workers plodding through each day. Raynor said one residents stops over each day to snap a picture to document their progress. At The Spinney, spring has arrived.

The Spinney at Van Dyke is a neighborhood of its own, designed for the 55-and-better community that has retired into their next phase of lifestyle, or working professionals working towards that goal.

What makes The Spinney so unique is its one-story living approach. All of its buildings are built this way so residents do not need to climb stairs in their homes again, allowing them to age in place. Another reason for this building technique is for the convenience of privacy. No one will ever live above or below them, unlike apartment buildings that are built floor on floor. To add onto the attractiveness of this concept, most unit types have attached, direct-access garages and private front porches and back patios, further mimicking the feel of a single-family home.

The neighborhood is also designed like a typical residential development. Each home given a distinct character, and in some cases, tree rows lining the side of the road. The aesthetic that often times mirror the neighborhoods residents leave behind, tends to coax back the sense of community they once had in the past. Raynor shared the story of how one resident developed a friendship with a neighbor. That compassionate neighbor drove her to daily medical treatments for a month. Something, Raynor said, you don’t often see in neighborhoods anymore.

While Spinney cottages’ amenities may make residents feel as if they’re living in a single-family home, they will no longer feel the woes associated with homeownership. Think about regaining all the time spent on mowing the lawn, shoveling snow and fixing the plumbing, so you can focus on family, friends and hobbies — hobbies which can be further fostered by the group’s community events calendar.

A 4,000 square-foot community center, The Spinney’s clubhouse, opened in January, providing a town square feel that allows its residents to socialize and gather for sponsored events. The group also anticipates a community garden, complete with raised beds, that will allow residing gardeners to plant and grow their favorite plants that can later be planted by the group’s grounds keepers.

“We were talking yesterday about what would happen if there’s too many people, based on capacity [for the pools],” said Raynor, who replied back to the inquiring resident she didn’t believe that to be a concern. The resident, however, reaffirmed her excitement over the pool. “I am telling you, I will be at the pool, every single day,” Raynor recalled the resident saying.

Two men – from Saratoga and Colonie – arrested for child pornography