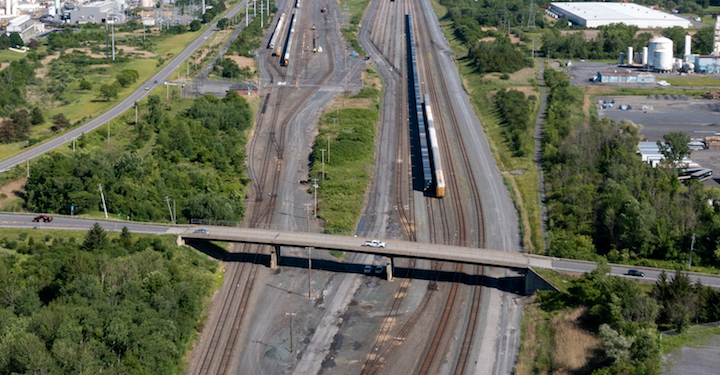 The Selkirk Yards. The CHPE project will run on West Yard Road around these CSX facilities. Spotlight News Photo by Jim Franco.

FEURA BUSH — The Towns of Bethlehem, Coeymans, New Scotland and Guilderland are going to see a project run through it that will help mitigate two major problems that affect New York: increasing demands for energy and growing concerns over carbon emissions.

The power derives from renewable sources, hydroelectric and wind turbines, supplied by the Canadian utility company Hydro-Québec.  While overhead electric transmission lines are a common way to connect a source with a user, a high-tech solution has evolved to help New York (and the world) reach its power needs while meeting emission-reduction goals.

What is the CHPE?

The Champlain Hudson Power Express is a power transmission project that will run a high voltage direct current (HVDC) power cable from the U.S. and Canadian border through Lake Champlain and the Hudson River to New York City. The project is being built by Transmission Developers, Inc., a company that has offices in Albany, New York City and Vermont.

The transmission line will run 339 miles and carry 1,250 megawatts of power from wind and hydro generating facilities owned by Hydro-Québec. The cable will be both underground and underwater.

One section of the cable will travel through Guilderland, New Scotland, Bethlehem and Coeymans, mostly along CSX rail right of ways, but also along municipal roads and private property to avoid the Selkirk yards.

The project is fully permitted through the federal and state governments and has sighting approvals with local governments where it does not follow government-regulated paths. TDI is ready to start construction.

Spotlight News had the opportunity to speak with Don Jessome, CEO of TDI to get details and some history of the project.

TDI was formed in 2008 solely for developing a power link between Hydro-Québec and the energy market in New York, but the plans on the north side of the border is what really got the ball rolling.

“Hydro-Québec, back in 2003, came up with a new energy policy. They were seeing a decline in the amount of renewable energy that they were delivering to other provinces in Canada and states in the US,” Jessome said.  “They went on a plan to increase hydro facilities by 5,000 megawatts and also increase wind facilities by 6,500 megawatts.”

This plan required markets to use the energy created and bold transmission strategies to get it there.

“What we did was identify the fact that Hydro-Québec does not have enough takeaway capacity or transmission to get that new renewable energy to the marketplace,” he said. “We started our company in 2008 after they very clearly stated their plan. You have a supplier who has the clean energy, you have a customer that needs the clean energy and (they) needed a transmission provider to connect the dots.”

Fast forward to today, Hydro-Québec will be bringing the last of its new hydro plants,  Romaine-4 at the hydroelectric complex on the Rivière Romaine, online later this year.

According to Hydro-Québec, they operate 61 hydroelectric generating stations and 24 thermal (gas and oil-fired) plants with a total installed capacity of 37,200 megawatts. They also own or have agreements for about 9,000 megawatts of energy produced by wind turbines.  Hydro-Québec operates the oil and natural gas plants only when the renewable sources are operating at capacity and energy demand exceeds that capacity.

According to Jessome, TDI found that New York was one of the best places for a transmission project.

“We picked NY State for two reasons,” he said. “It had at the time, and continues to have, some of the highest-priced electricity in North America, so they needed new supply. But probably more importantly they were, even in 2008, on the cutting edge of renewable generation penetration. They were pushing for more clean energy supply.”

To move this energy efficiently, the company will use a high-tech solution.

HVDC has been around for many years and is widely used in Europe where it was developed. While overhead transmission lines and local power grids efficiently use alternating current for transmission, underground and underwater cables pose a problem on long transmission paths.

It is 339 miles from Astoria, Queens to Rivière Richelieu at the Canada–United States border and 40 miles further into Québec to connect the power.

“If you were to travel that distance with AC your losses would be about 40 percent compared to 3-4 percent,” Jessome said.

The power cable itself is actually made of two 5-inch diameter cables connected to two bidirectional converting stations on each end of the line that work together, with a high-tech twist to keep it efficient and safe.

The cables are each housed in PVC conduit with a fiber optic cable to allow continuous communication between the converting stations that allows for constant communication and monitoring of the line. “So that you have a system that protects the system and the public,” Jessome said.

The line also uses Black Start Technology which allows the line to restart a downed grid, like when Consolidated Edison had to restart its grid after hurricane Sandy.

“When Sandy caused all of the damage, You need electrical supply to restart the grid,” he said.

Because the lines are underground or underwater, it reduces interruptions.

“The added benefit to burying transmission compared to overhead is that it is less susceptible to wind or ice storms. It will have higher reliability when it comes to mother nature,” He said.

That hardened infrastructure is particularly important when connecting to the Hydro-Québec system. It is over 1000 miles to New York City from where some of the generating stations are in the northern part of the Canadian province. It is extremely unlikely that there would be a weather event that will affect both at the same time.

As the line descends south TDI made the decision not to keep the project solely underwater the entire distance.

Why the strange Path

The two primary reasons why they came out of the water were the depth of Lake Champlain at its southern end and to avoid the General Electric PCB clean-up project on the Hudson River and the dredging involved. The plan instead chose to use railroad right-of-way from Washington County to Greene County.

It also comes out of the river again for a few miles to avoid fragile fish breeding grounds in Rockland County.

As far as working under and around the tracks, TDI will adapt to the needs of both organizations.

“The railroads have very good design teams to be able to look at our design and make sure it meets their requirements and of course, it has to meet our requirements as well,” Jessome said.

“The good news is that they can easily co-exist.”

CHPE_Overview_AlbanyCnty_8x11L
However, there are certain areas where the CHPE must leave the rail beds. The developer has to work with local municipalities because the railroad right-of-ways are covered by the siting permits from the federal government, Article 7, but traversing local roads is not.

One example is near CSX Selkirk yards. CHPE has to go around by traversing town roads and crossing private properties. This required approval from the Town of Bethlehem, for example, to go along West Yard Road.

According to Town Supervisor David Vanluven, the Bethlehem town board did approve the roadside agreement. He said that the vote was not for or against the project but simply was for use of the road.

“We need consent if we are going to be under any town road, we need to get consent from that town to use town roads,” Jessome said.  “The great news is that of the 36 communities we need consent from, we have 35 already completed and the last community which is New York City, we are about 95% complete. They are going through the final public process right now and expect to have those consents by July.”

In addition to Article 7 citing permits and municipal approvals, the project received Army Corps of Engineers 401 and 404 permits for Whenever you are dealing with wetlands and traversing navigable waterways you have to get permission from the army corps of engineers.

“The design of the project was done very carefully so any roads that we did traverse would not be controversial and the towns were involved in the Article 7 process,” He said. “That is not a problem with us because we spent so much time with the outreach, that we did not run into that situation.”

For the print, flipbook version of the story click here

Hidden trailer park in Colonie would be razed under proposed plan

Tips to avoid fraud when it comes calling you