Hidden trailer park in Colonie would be razed under proposed plan 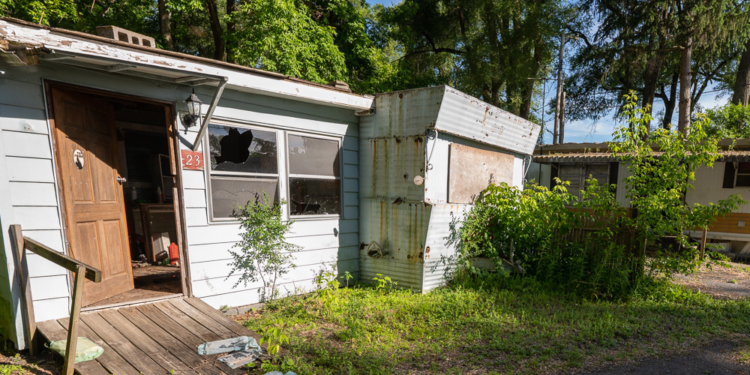 One of 19 vacant and dilapidated trailers located in a park between Central Avenue and Consaul Road. Under a plan under consideration, the park would be cleared and replaced with new town houses. Jim Franco / Spotlight News

COLONIE — A mostly hidden, dilapidated, vacant trailer park on a 2.4-acre chunk of land near one of the busiest intersection of Central Avenue could be home to new town homes according to a project introduced to the Planning Board.

There are 19 trailers on the land behind 1867 with room for four more. The tenants have been moved since Saber Seraj purchased the land and commercial building out front­ — which is three doors west of New Karner Road — two years ago.

There is already a significant amount of work being done on the commercial space that did not need Planning Board approval.

The Planning Board, while agreeing the project represents a significant upgrade to what is there now, had concerns about density and having children living that close to Central Avenue.

“That stretch if central avenue is known for low income trailer parks and hotels, what is the price point for the apartments?” asked Planning Board member Michael Malone. “Will this eliminate the low income area so we are not going from bad to bad and we are going to bad to better.”

Sipperly said the plan is to offer market rate apartments in the neighborhood of $2,200 a month.

“I think this is going to clean up this section of Central Avenue,” he added.

Planning Board member Chip Ashworth said there needs to be something to keep children off Central Avenue and member Lou Mion suggested doing away with the four-unit building to add greenspace.

The plan as presented does include a playground and a picnic area but Sipperly said while the applicant would prefer all 18 units he would explore the economic feasibility of having just 14. He said the layout could be reworked and include some one- and two-bedroom apartments, smaller than the proposed 1,500-square-foot units, to make up the difference.

The project would require a number of waivers including having less than 35 percent greenspace required for a mixed use development in a Commercial Office Residential zone. This project would have a little more than 25 percent but there is a vacant chunk of land adjacent to the trailer park and nobody knows who owns it. Sipperly said his client has tried to locate an owner but there are no existing records and his client is prepared to purchase it should the land go to auction through the tax foreclosure process which would up the amount of greenspace.

Or, Sipperly said, his client is prepared to make a monetary contribution to the town’s greenspace fund, which is commonly done when projects fall short of the required greenspace. He said the trailer park right now has about 23 percent greenspace.

Also, under the current zoning regulations 11 units are permitted with 18 proposed. But currently there are 19 units with four vacant pads so there were as many as 24 units on the land.

“The applicant requests to maintain a similar residential density on the property as that as presently existing and occupied,” he said.

Also, as presented, the commercial portion of the project would require 67 parking spaces and there is only room for 57.

Planning Board member Meghan Baker said she was a Big Sister to a girl who lived in the park and was concerned about the people who were living there finding somewhere to live. Sipperly said his client had asked all residents to move when he purchased the property but that there may be some squatters still occasionally calling the trailers an occasional home.

“There is a long history of that property with the trailer park in the back and this is a marked improvement, a welcomed improvement. What you are doing to the building in front looks very nice but I think the density is too much,” said Planning Board Chairman Steve Heider. “If you do away with the four-unit, it could be a very nice project in the back and I think it would help you attract people to a market rate because I’m not so sure this layout would attract people at market rate.”

It was presented during a sketch plan review, a way to introduce the project to the Planning Board, and must come back before the board at least twice more before construction can begin.