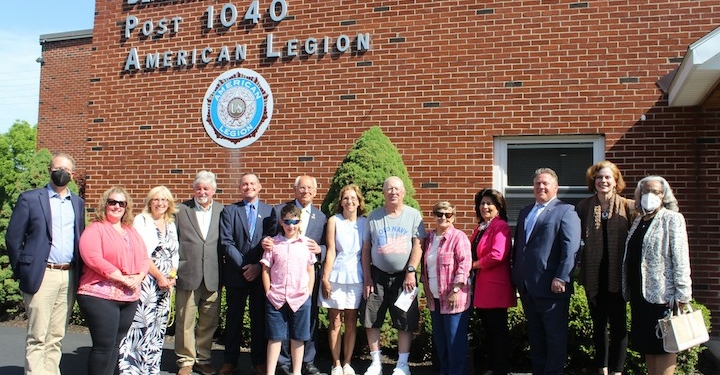 ELSMERE — Politicos and dignitaries gathered early Monday morning, June 6, as the local American Legion Post adopted a second name in respect to a Medal of Honor recipient who recently passed.

American Legion Post 1040, on the corner of West Poplar Drive and Elsmere Avenue, is now The Blanchard-Currey Post of The American Legion.

The post, originally dedicated in 1931, has long carried the name of Nathaniel Adams Blanchard. According to legion history, he was believed to be the last American service member killed in action in World War I.

The second, new name, honors that of Francis S. Currey.

Currey served in the United States Army during World War II, enlisting into service just prior to his 18th birthday. According to The National WWII Museum, he missed D-Day: June 6, 1944, the day the Allies invaded Western Europe in World War II by a matter of weeks.

He was stateside in the days leading up to the pivotal campaign. He was at Camp Breckinridge, Kentucky, preparing to join the European front. A mandate from President Franklin Roosevelt prevented soldiers younger than 19 years old from deploying overseas. He turned 19 just three weeks later.

Currey arrived at Omaha Beach a couple of months after the invasion, where he was assigned to the 30th Infantry Division. The first action he witnessed was that September in Kerkrade in Holland. According to his official Medal of Honor citation, his actions that December would lead to him earning the nation’s highest military award for bravery.

He was defending a strong point near Malmedy, Belgium, when the Germans lead a powerful attack in late December. They had previously overrun tank destroyers and antitank guns and advanced to his position. After what was described as prolonged fighting, his platoon was forced to withdraw to a nearby factory. He found a bazooka but needed to cross the street to obtain rockets. He proceeded to do so, dodging intense fire from enemy tanks and infantrymen from a short distance away.

After obtaining the rockets to arm the bazooka, Currey and a companion knocked out one tank with a single shot. They moved to another position, killing or wounding three German soldiers outside a house known to be an enemy stronghold. He then slipped away from the safety of cover, advancing to position himself within 50 yards of the house. Supported by friendly fire, he stood erect with the bazooka and fired a shot that knocked down half of one wall.

From his vantage point, Currey could see five American soldiers who had been pinned down by the house he had just attacked and three more enemy tanks. He proceeded across the street to a vehicle carrying antitank grenades and launched them towards the tanks, forcing the tankmen to retreat into the house. With the enemy retreated into the house, Currey bounced from one machine gun to the next, freeing the five servicemen from their position.

“Deprived of tanks and with heavy infantry casualties, the enemy was forced to withdraw,” states the citation. “Through his extensive knowledge of weapons and by his heroic and repeated braving of murderous enemy fire, Sgt. Currey was greatly responsible for inflicting heavy losses in men and material on the enemy, for rescuing [five] comrades, [two] of whom were wounded, and for stemming an attack which threatened to flank his battalion’s position.”

Currey was presented the Medal of Honor by the 30th Infantry Division Commander, Major General Leland Hobbs on July 27, 1945, near Reims, France. The medal was officially awarded to him on Aug. 17, 1945.

Currey returned home and married his wife, Wilma. The two raised three children together. He spent his post-military life as a counselor at the Veteran’s Affairs Hospital in Albany until he retired in 1980. He died on Oct. 8, 2019.

Blanchard was a member of Company G 307th Infantry 77th Division when he was killed at the end of the Meuse Argonne Offensive in France on Nov. 9, 1918. His body was returned to Delmar and now rests in the Bethlehem Cemetery.