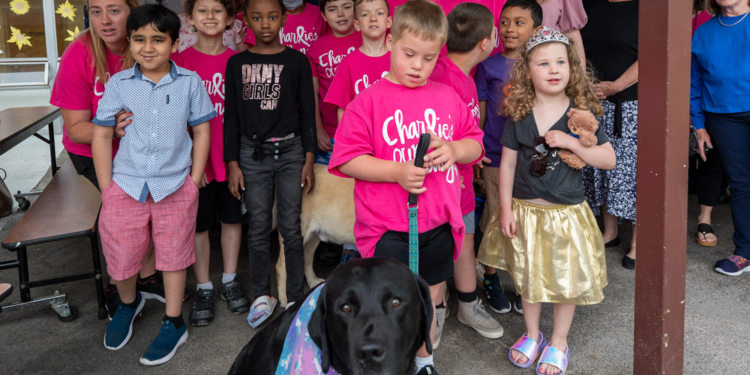 COLONIE — “Live your life to be better than yourself.”

Nowhere was that phrase more evident than last week at Saddlewood Elementary School.

It was spoken by Jimmy Plourde, a Colonie native and Boston firefighter who made international news when he was photographed carrying a girl to safety after the Boston Marathon bombing in 2013.

It was made a realty then by Plourde, and he was making the sentiment come alive again as a representative of Where Angel’s Play, and the announcement of the national foundation’s decision to build Charlie’s Playground at Saddlewood.

The playground’s namesake, Charlie Fernandez, was a 7-year-old, first grade student at Saddlewood stricken with a rare form of pediatric cancer, neuroblastoma. She was diagnosed at age 5, and 18 months later a tumor pressing against her optic nerve took her eyesight, said her mother, Danielle Fernandez. Her daughter died on April 19, 2021.

She may have lost her sight, but she didn’t lose her spunk, despite countless visits to the doctor and countless treatments that sapped her strength and tested her will.

“When her sight was taken, she never stopped, she never complained, she scooted along and she loved doing things. As a father of two girls, I understand that at the end of the day Charlie was a child who loved to play so her favorite thing was going to the playground,” Plourde said. “To the dismay, maybe to some of her teachers and some of the other staff seeing this young child go up and climb around the playground and go down the slide, she smiled and she laughed and she loved.”

The new playground will be designed so all children can enjoy it regardless of their abilities. For example, Danielle Fernandez said, it will have braille markings so blind children can independently navigate their way around and tables with games and other fun stuff so children in wheelchairs can still participate.

In her short life, Charlie Fernandez left her mark, a mark that will continue with the construction of a playground that will carry her name, said her teacher, Sarah Norton.

“One day, after she couldn’t see and she was very tired from treatments, she wanted to go to the biggest slide we had so I said OK. Myself and monitors brought her to the top and she came down with the biggest smile and all the kids were around her smiling and laughing,” she said. “That was her happy place. She wanted to be outside and she wanted to play so I look at building this all-abilities playground were kids can go with more independence as something that would make her happy.”

During the press conference announcing the local and national collaboration to build the playground on Wednesday, June 1, both Charlie’s mom and Norton mentioned the thunderstorm and torrential rain that happened by.

“She was spicy and that’s why we are getting a thunderstorm,” Norton said.

Where Angels Play is a national foundation started in 2012 by the New Jersey State Firefighters Mutual Benevolent Association looking to honor the children, teachers and families of the mass murder at the Sandy Hook Elementary School in Newtown, Connecticut. The NJFMBA president at that time, Bill Lavin, and other members worked on building playgrounds in Mississippi in the aftermath of Hurricane Katrina so the decision was made to build 26 playgrounds in Hurricane Sandy destroyed communities along the East Coast — one to honor the memory of each teacher or student lost that day in Newtown.

Each playground reflects the personality of the teacher or child for whom it is named and the project had unanimous approval and blessings of all 26 families.

Newtown families have chose to “pay it forward by helping to continue the initiative to build playgrounds in needy communities across the country,” according to the organization’s website. Since completing The Sandy Ground Project, the Where Angels Play Foundation has built playgrounds in Mississippi, Massachusetts, and as far and Ontario, Canada and Kibeho, Rwanda.

“From that, we were not only able to build a playground but we built something called the Angels Army. An army of volunteers that spent long days, heat waves in South Dakota or building a playground in Boston during a blizzard. Never complaining, just focusing on the task at hand, building something out of love,” Plourde said. “Sarah Norton’s bond with Charlie and her family set the tone in life as it will to build this playground and maybe, just maybe, without even knowing it your little girl who lived a short but powerful life was meant to inspire others to do great things.

“And a life that is better than herself continues to inspire each one of us to live better.”

The playground is expected to open next fall and could not be accomplished without the help of local organizations like Hannaford, SEFCU and the Community Foundation of the Greater Capital Region.

A representative from Hannford, Peter Warner, the store manager of the store in Colonie, brought a check worth $20,000.

“We want our communities to be strong and we know that healthy and thriving communities are those that are inclusive and respectful to all of our members,” he said. “We know playgrounds play an important role in the physical, social and emotional development of our most vulnerable community members and that is our children. Charlie’s playground will support the long term health and wellbeing of our youth by fostering a sense of social connectedness and belonging. It warms out hearts to know Charlie will touch many lives through this playground.”

Charlie Fernandez was a special student and her classmates adopted her as one of their own. They would tip toe around her and be especially quiet when she napped and laughed with her as she came down the slide.

“Charlie meant so much to our school community and her family wanted to create something special in her honor but also have it benefit the Saddlewood Elementary students and our community at large,” said Superintendent David Perry. “We are excited to partner with Charlie’s family on this special project and welcome our community to view its progress and utilize this area in the way that Charlie would have intended. To have fun and enjoy the outdoors together.”

That type of support helped the family get through one of the most trying times any family must face, burying a child.

“The outpouring of support from the community helps you get through it,” said Charlie’s grandmother, Sharon Boisvert. “She was always worried about everyone else. I would be crying and she would said ‘Gram are you OK,’ or a baby would be crying when she was in the hospital getting treatment and she would ask ‘is that baby OK.’ That’s just the way she was.”

Jason Fernandez, Charlie’s father, said “for this to come together means so much to our family.”

“Just reaching out to where angels play at the very beginning and then to have it at the school she went to has just been great for our whole family,” he said. “All the sponsors have been great. We are a year and a half out and we almost reached out goal but we want to pay it back.”

“We never in a million years thought this could happen,” Danielle Fernandez said. “But an all abilities playground for Charlie is becoming a reality. Some of her happiest days were spent on playgrounds so to make a playground that can be used by all would have meant the world to her.

Experts say mortgage rates are trending up to ‘normal’