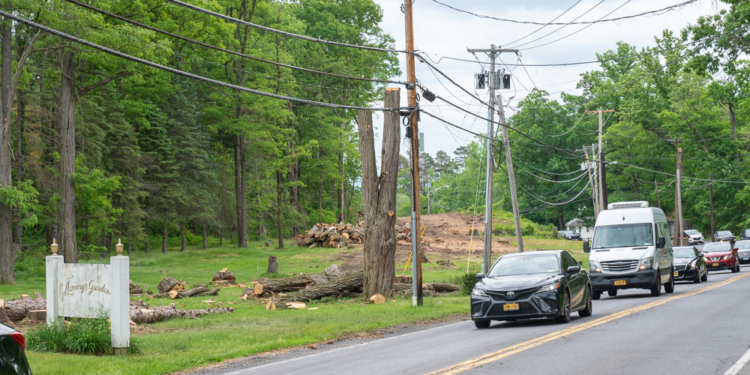 COLONIE — A project to better traffic flow along Watervliet Shaker road is underway.

Bill Anslow, a civil engineer with the Albany County Department of Public Works, said the work this construction season will focus on clearing and grading land between Sand Creek and New Karner roads and moving National Grid and other utility poles.

For about two weeks, crews have been along Watervliet Shaker Road cutting down a number of trees on both sides of the road near Memory Gardens.

The majority of the actual $6 million worth of road work will begin next year. Significant traffic delays are not expected this year, but there has been occasion when crews had to reduce traffic to one lane to take down the taller trees closer to the road.

Next year, Anslow said, work will take place between April and November and there will be times when the road will be reduced to one lane depending on the work being done.

The scope of the project is as follows:

• A multi-use path on the south side of Watervliet Shaker Road and a new sidewalk on the north.

• Drainage will be updated through the corridor.

Albany County, which owns the road, presented a number of different options for the stretch of Watervliet Shaker Road including adding two roundabouts — one at the intersection with New Karner Road, or Route 155 which turns into Vly Road heading north, and a second round about at the intersection with Career Path, which turns into Vly Road heading south.

That much more expensive project was not chosen but not for lack of support. A poll of those attending a ZOOM meeting in April, 2021, were nearly split, with 49 preferring improvements to the signals and 51 percent saying they would like to see roundabouts.

There were four proposals presented with the first being to continue routine maintenance and another would be new paving, an upgrade to signals and restriping of the roadway.

A contractor has not been chosen to complete the planned road work, Anslow said, but is expecting those formalities to be solidified this fall.

Under the plan currently underway, there is one spot, at the intersection of Vly Road and Watervliet Shaker Road where the business Infinigy is located, where the county will need to acquire “a sliver of land” in order to construct a sidewalk. Possibly, it will need to acquire some land on the southwest corner of the intersection of Sand Creek and Watervliet Shaker roads.