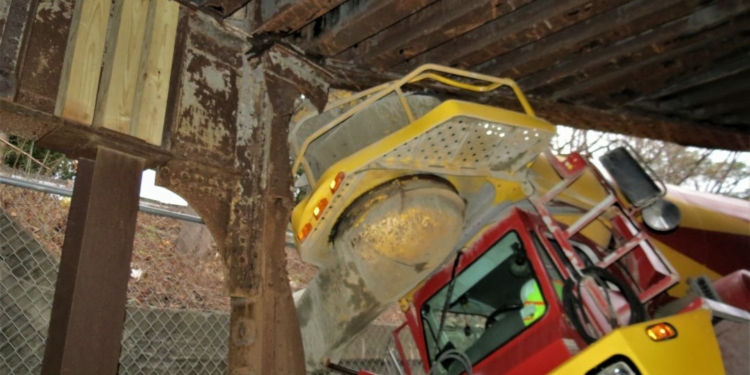 SLINGERLANDS — Traffic along New Scotland Road was interrupted near the Kenwood Avenue intersection Tuesday afternoon after the operator of a commercial cement truck struck the former railroad bridge that spans across the roadway.

According to the Bethlehem Police Department, a Queensbury man was driving westbound in a cement truck registered to Cranesville Block on New Scotland Road when it struck the Albany County Helderberg-Hudson Rail Trail bridge at approximately 2:40 p.m.

The truck became lodged underneath the bridge causing the roadway to be closed for several hours until the truck could be removed. Representatives from Albany County Public Works and New York state Department of Transportation were at the scene surveying damage to the bridge. After an assessment, the bridge was determined to be safe and the roadway was reopened to traffic.

The driver was charged with disobeying a traffic control device.

Assisting with the incident were members of the Slingerlands Fire Department, New York state Department of Transportation, and Albany County Public Works.