Last seat on the Colonie Town Board is now just a two-vote spread; Green appears to have won judicial race 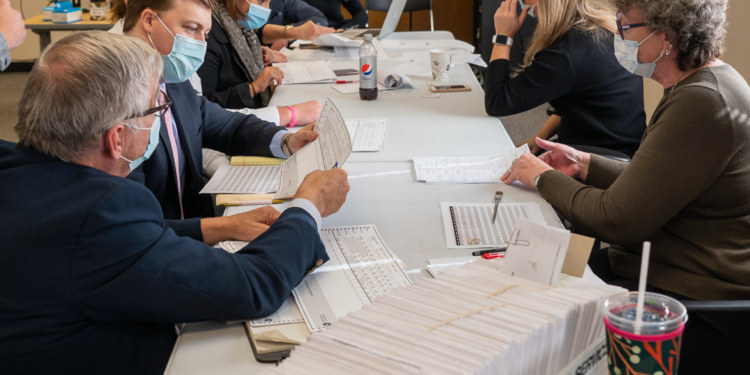 COLONIE — After two intense days of counting more than 2,800 absentee ballots the third Town Board seat has narrowed to a two-vote margin with nearly 200 left to count.

With the majority of absentee ballots counted, Velella now leads Gamble by just two votes with about 90 affidavit ballots and 187 absentees left to be counted. The state Board of Elections is requesting all counties to wait until Monday to rule out any duplicate ballots, said Elections Commissioner Rachel Bledi.

If Gamble does prevail, he will be the first Black candidate elected to town government and the board will be tied with three Republicans and three Democrats with a Republican as supervisor.

Peter Crummey defeated Kelly Mateja for the town’s top spot by a margin outside the number of absentee ballots.

Also, Democrat Melissa Jeffers, the only incumbent running for the three open board seats, surpassed Jeff Madden, a Republican, as the candidate getting the most votes.

There were some 2,876 absentee ballots to count after Election Day, an inordinate amount due to COVID-19 precautions that included allowing voters the right to vote by absentee without having a traditional legitimate excuse like being ill or being out of town. Two years ago, the last off-year race that featured a supervisor, there were 750 votes cast by absentee.

Of those returned this year, 1,468 were by those enrolled in the Democratic Party, 572 by Republicans and 647 by voters not enrolled in any party.

It also appears David Green has surpassed Jennifer Whalen for the third open seat on the Town of Colonie Court bench.

He is technically an incumbent after the Town Board appointed him to the bench earlier this year to fill the seat vacated by Crummey, who opted to run for supervisor. But it is the first time he ran for a four-year term.

Longtime incumbents Norman Massry and Andrew Sommers received the most votes with 11,130 and 10,195, respectively.

Green had four lines, the Democrat, Conservative, Working Families Party and Colonie Forward Party, a line created by the Democrats through the petition process. Whalen had just one, the Republican Party.