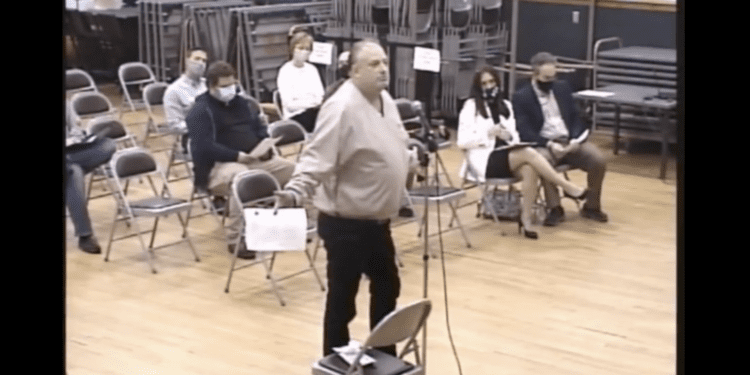 DELMAR — John “Tiger” Anastasi continued his fight against Highway Superintendent Marc Dorsey, this time taking it to other members of Town Hall on Wednesday, Oct. 27.

The Republican challenger continued a barrage of criticism that started with a political forum two weeks before, after expressing that he was “a little dismayed” that the Ethics Board’s recent determination was not included in the Town Board’s agenda.

The town’s Ethics Board investigated and made a determination following a complaint against Dorsey for services he had allegedly received. According to multiple sources with knowledge of the matter, he had contractors transport soil and fill, and deposit it upon his personal property.

Town Supervisor David VanLuven explained earlier in the meeting that the board had only just met that evening to discuss the details and seek legal advice from Town Attorney Jim Potter while in executive session. Without disclosing Dorsey’s name, he said the Town Board decided to allow him to speak in another private meeting before the board meets again on Wednesday, Nov. 10.

Dorsey had previously confirmed that the complaint is against him, and has called it “a political hit job.” He shared with Spotlight News how he explained to the Ethics Board that he receives clean fill on his land, and has held a permit to do so for the last five years. The fill is “valueless” he said, otherwise the contractors who dump it would sell it on the open market.

“If this was a real problem, it would have been brought up when I was first elected in 2019,” Dorsey shared in a statement. “Instead, this is being used as a political hit job two weeks before an election.”

Anastasi, who served as the town’s highway czar from 2017 to 2019, told the Town Board that’s still a violation of the ethic’s code. He followed by asking Potter to confirm. The town attorney refused to comment, reiterating the board’s policy that it avoids interaction during public comment.

Anastasi pressed on for nearly seven minutes with the same fervor he first expressed during an online political forum two weeks ago. During that forum, Anastasi questioned Dorsey’s morality while listing his mishaps from the prior year, including selling $1,800 of town equipment last July without prior approval and going $150,000 over budget to pave the town’s compost facility on Feura Bush Road the following September. The Republican Party later followed with a mailing campaign that copied headlines and editorials from The Spotlight as the newspaper reported those events.

The Republican challenger proceeded to involve himself in an exchange of words with Town Board members, specifically Democrats Maureen Cunningham and Joyce Becker. He blamed Cunningham, and her sister Bethlehem Democratic Committee Chair Joanne Cunningham for selling the town “a bad bill of goods” when they introduced Dorsey as a candidate in 2019.

“I know you can’t comment, Maureen, because you and your sister endorsed him. Which is fine. I’m not asking you to comment,” he said. “Joyce, I know you’re best friends with his parents. I don’t know, from what they say, you might even be his godmother. … I’m just telling you what’s going around.”

“I’m not being political at all, and don’t say that. This is about an election coming up,” he said.

“That you’re running in,” said Cunningham.

“Full disclosure, for anyone who doesn’t realize, you’re running against the person that you’re talking about,” Cunningham said. “So this is a political speech.”

“And you and your sister brought this false bill of goods on us, okay? Let’s be transparent here. I know you’re laughing. It’s funny, but it’s not. It’s pretty sad,” Anastasi said, directing his comments towards Cunningham. “Because, you’re costing me, as a taxpayer, money…”

This is believed to be the first determination by the Ethics Board. Through a FOIL request, the Town stated that the board had not presented one in the previous three years. A review of its meeting minutes revealed it had never shared a judgment with the Town Board since it was established in 2013.

The Ethics Board meets sporadically; only when it receives a complaint or as the five-person board prepares its annual report to the Town Board. The board, comprised of town residents appointed by the Town Board, provides advice upon request. It also investigates sworn complaints and makes recommendations to the Town Board regarding how to address them. The board can recommend any kind of action, from suggesting fines to outright termination.

“We’re six days before an election. We have a right to be educated and know what’s going on with this individual, so we can make a good decision when we go to the voters’ box,” Anastasi said. “I think we do. And if not, our board, that we elect, is not being transparent to the people that elected it. I think we deserve better. And if you can’t, and you want to stick up for somebody like that, maybe it’s time for you to go. That’s the way it comes, and you’re up for reelection this year, too, right?”

United we stand; divided we fall