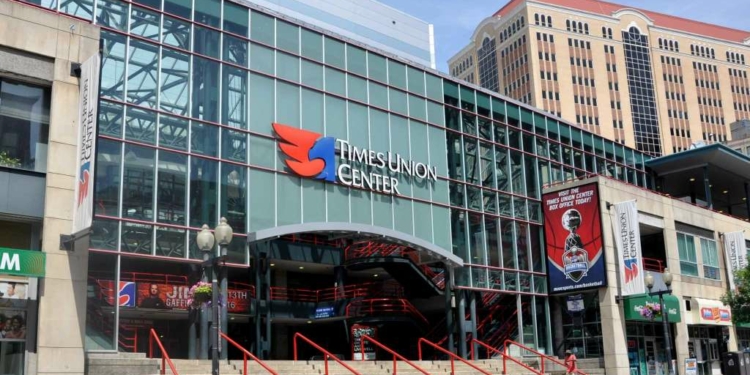 ALBANY — The name of the Times Union newspaper will no longer appear on the facility that opened as the Knickerbocker Arena in 1990.

In a statement on the newspaper’s website, Publisher George Hearst III said the media company will “continue to invest in its journalism by maintaining a robust newsroom staff and growing its geographic region.”

The Times Union recently launched an expansion into the Hudson Valley.

The media company had paid Albany County, which owns the facility, $350,000 a year for the last 15 years. It had a contract for 10 years with an option to renew for another five, according to the newspaper.

“We’re in the midst of an evolution at the Times Union that will deepen our impact across the Capital Region and Hudson Valley and expand our ability to report on the diverse communities we serve,” Hearst said in a statement on the newspaper’s website. “With digital subscriptions growing and new hiring in our newsroom, the time has come to open up the opportunity for another company to put their name on the arena as we shift our focus to reaching new audiences in different ways and double down on our commitment to meet our region’s need for high-quality, trusted, local journalism.”

ASM Global operates the arena for the county. It is home to such sports teams as the Siena mens basketball team, the Albany Empire arena football team and the Albany Firewolves indoor lacrosse team that will kick off its inaugural season in December.

It has also hosted musical giants like Frank Sinatra, who christened the arena in 1990, Bruce Springsteen, the Grateful Dead and other world-class acts.

In 2019, a nearly $20 million renovation project was completed on the atrium that fronts Pearl Street in the heart of the Capitol City. Through its history, the arena, with a capacity of about 17,500 depending on the act and the configuration, has had more than 19 million visitors and hosted more than 4,300 events, according to the arena website.

County Executive Dan McCoy said a Request for Proposal will be issued shortly for a naming rights contract.

“Albany County has had a long and trusted partnership with the Times Union newspaper and we can’t ignore the fact that the pandemic and the move to remote digital technology has changed the business model for many industries, including the County,” he said in a statement. “Our arena is a premier sports and entertainment facility that attracts top notch talent as well as patrons from beyond the Capital Region.”

County resident in their 30s dies of COVID, third in less than a week