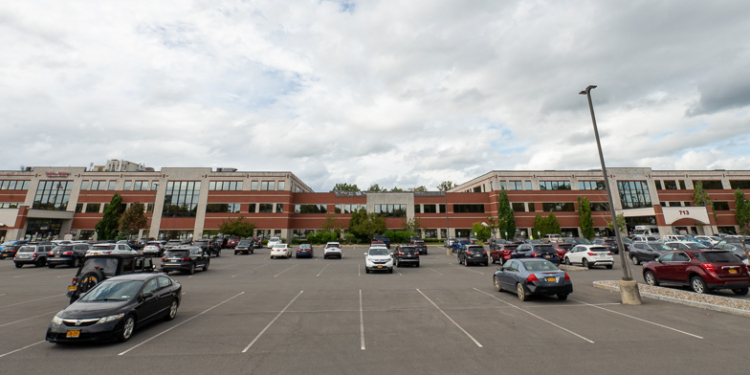 COLONIE — The Planning Board, by a 4-3 vote, gave the final go ahead, with conditions, to a three-story, 260,000-square-foot medical office building on 21 acres at 4 and 6 Autopark Drive.

The three-story building will be home to Community Care Physicians, which is currently headquartered at 711-713 Troy Schenectady Road near the intersection of Wade Road and between Route 7 and Forts Ferry Road. That building opened in 2004 and currently houses the some 755 employees who will move to Autopark Drive when the building is completed sometime before 2024.

The building is within the Boght Area GEIS, and as with any project within that boundary it carries a mitigation fee based on the use of the project, its gross floor area, the size of the entire site and traffic generation “which allows the town to address the cumulative impacts of development” and “offset the costs for capital improvements in that area,” said Sean Maguire, director of the town Planning and Economic Development Department.

The mitigation fees calculated for the massive building is $2 million, he said, subject to a final approval by the Town Board.

The Planning Board, at its meeting on Tuesday, Sept 28, in a rare break from unanimity, gave an OK to the final site plan review, presented by Dan Hershberg on behalf of the developer, Columbia Development.

There were conditions attached that must be satisfied before construction can begin at the nearly 21-acre site located off Route 9. They include a permit by the Army Corps of Engineers to disturb some wetlands on the site, compliance with comments from the town departments regarding minor, technical issues, a fuller explanation of how the two lots will connect and how traffic will move between the two, whether or not traffic will warrant a turning lane to exit from Autopark onto Route 9 and whether or not Plaza Drive, which runs from Autopark to Century Hill Drive, should be a public road and if not, why not.

“I’d like to see the project come back before us. I don’t want to get too far ahead of ourselves with the ODA and I think we need a better explanation of traffic mitigation at Autopark. I want to see if this whole access with 950 will work or not work and a better explanation on why Plaza Dive cannot become a public road.” said Planning Board member Craig Shamlian. “I’m in favor of the project, in general, but I don’t think we should be abdicating this much responsibility. A large part is our responsibility.”

Planning Board Chairman Peter Stuto, though, called for a vote to “narrow the issues. It passed, but along with Shamlian, Steve Heider and Susan Milstein voted in the negative.

“I don’t want to go over everything again,” Stuto said, adding the board does have the right to not allow the project to continue if the conditions are not satisfactorily met by the developer. The building grew by 20,000-square-foot since it was first proposed in June, 2020 and did make an extra presentation to the Planning Board between concept acceptance and final approval to hash out some outstanding issues.

The project would be state of the art medical arts building, similar to 260,000 square-foot, three-story building at 711-713 Troy-Schenectady when it opened in 2004.

It is projected to generate some 561 new vehicle trips on that portion of Route 9 during the p.m. peak driving hours, include some 1,200 parking spots and will be visible from the Northway.

It will allow Community Care Physicians to consolidate not only the employees of the Troy-Schenectady Road facility but others in the Capital District at one location.

“Because of the space constraints, we have not been able to bring our administrative teams fully together, so in the new Latham building, we will be able to all be under one roof,” CCP Chief Operating Officere Joan Hayner told the Business Review.

With this project, it is unclear what will happen when the some 675 employees from the largest independent medical group in the Capital District, Community Care Physicians, moves from 711-713 a few miles north to Autopark.

‘Musical chairs has got to stop’

Heider, after he voted no, praised the aesthetic qualities of the new building and the presentation to the board.

His vote in the negative, he said is more symbolic and a way to highlight a growing problem he fears will only get worse for Colonie as a whole.

“This is just a cannibalization of another landlord’s property by taking all the tenants from 711 and 713 and I realize that it’s the American way,” he said. “But I don’t know of another 250,000 square feet of commercial tenants out there ready to run to 711 and 713 nor were they ready to run to 6 Autopark Drive otherwise this would have been built 10 years ago.”

His fear is, since 711-713 Troy-Schenectady Road was specifically built for medical offices, it will cost millions to renovate into general office and will sit vacant for a prolonged period of time.

He adamantly acknowledged it is not the Planning Board’ job to review tenant selection or to write a business model for any private entity. Eventually, though, he said the cycle has to, or should, stop.

“At the end of the day, we are going to wind up with a lot of vacant commercial space in this town,” he said. “This is not new business coming into town, it is just moving business around town. As you drive around, all you see is space available for rent and it is going to get nothing but worse.”

He said a perfect example of his fears coming to fruition is the Red Roof Inn, which opened as a Holiday Inn, Turf Inn, on Wolf Road. At one point, the hotel hosted major conferences and had a thriving bar and restaurant. Now, as new hotels were built up and down Wolf Road, it sits vacant and crumbling on one of the busiest roads in the Capital District.

“Nobody thought the Turf Inn would close and nobody thought we would have a truly, truly ugly eyesore on Wolf Road and it’s not the first of many hotels in this town that has turned to such a state because everyone likes the new product. Everyone likes the new toy,” he said. “Everyone thinks Colonie is immune but if you ride around town you see a lot of vacant buildings and empty buildings bring blight and other unsavory things.

“At some point this game of musical chairs has got to stop.”