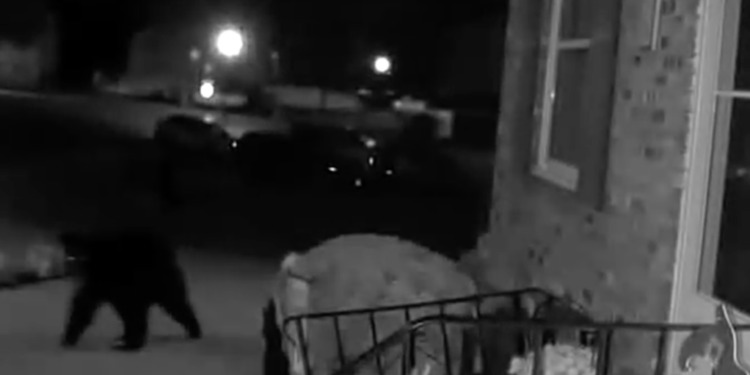 COLONIE — A bear was seen wandering around a backyard in the heart of the village on Wednesday, Sept. 29, at around 1:50 a.m.

The black bear was captured by a surveillance camera of the residential home on Pine Avenue and stopped briefly when a light was activated by a motion detector before meandering off.

Colonie police are warning residents to follow state Department of Conservation guidelines to avoid having issues with bears, which are generally afraid of humans and do try to avoid contact with them.

To prevent issues with bears around homes the DEC recommends storing and disposing of garbage and removing bird feeders when bears are active. The simplest way to avoid issues with bears is to remove unnatural sources of food.

If you need assistance with a nuisance bear, please contact your regional New

Once a bear has become a problem, DEC staff are often asked to move it. Unfortunately, that rarely solves the problem, according to the DEC. Relocated bears have been known to travel up to 300 miles to return to where they were caught. Bears that don’t return may continue their bad behavior at the new location.

Circumstances that led to the original problem must be corrected, or human-bear conflicts will persist.

“Enjoy the privilege of seeing a magnificent wild animal, but don’t lose sight of the fact that bears are powerful animals that will defend themselves if they feel threatened,” according to the DEC. “Never approach, surround or attempt to touch a bear. Always leave a clear escape route for a bear. If you feel threatened by a bear, back away slowly, but do not run. If the bear won’t leave, make loud noises—yell, clap, blow car horns or air horns, or drum on nearby objects.”