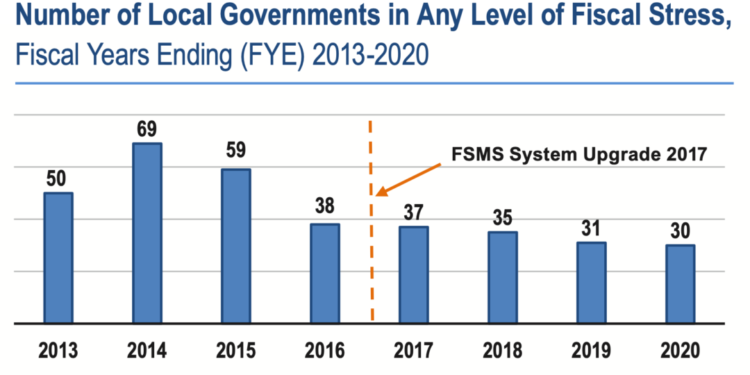 COLONIE — For the fourth consecutive year, the town is listed as susceptible to fiscal stress by the Office of the New York State Comptroller.

When the Fiscal Stress Monitoring System was implemented in 2013, the town was classified as under significant fiscal stress. It was upgraded to “moderate fiscal stress” a year later and stayed in that category until 2016 when it was upgraded to susceptible. In 2020, the economic data the comptroller’s office analyzed for the latest report, the town was closing in on the numbers needed from being off the list, said Acting Comptroller Chris Kelsey.

The town has a fiscal score of 45.8. The City of Albany was the only other municipality in the Capital District to make the list with a score of 52.9.

“I would first highlight the fact that the town is .9 percentage points away from being off the list, having improved again during 2020 from 52.5 percent in 2019,” he said. “In 2012 when the Fiscal Stress Monitoring Program was first initiated by OSC the town was in the Significant Stress category with a score of 65.8 percent. The town steadily declined into the Moderate Stress category in 2013 (62.5 percent) and by 2016 we moved to the current category of Susceptible to fiscal stress (52.5 percent.)”

He said the financial issues date to the administration prior to Supervisor Paula Mahan taking office in 2008.

“The prior administration had generated a town-wide deficit in excess of $20 million and the town’s bone rating had dropped to Baa2 as rated by Moody’s at the time,” he said. Had the fiscal distress monitoring program been around back then, the town would have been near the top of the list.”

Standard and Poor currently rates the town’s bond rating at A+ with a positive outlook.

“Assuming economic conditions remain stable we are confident that for 2021 we will have moved off the list to the no designation category,” he said. “While it has been a challenge, and will continue to be challenging for the next administration, Paula and the management group are proud of our financial accomplishments over the last 14 years.”

The state Comptroller’s Office rates each municipality’s fiscal health based on a number of indicators including year-end fund balance, cash on hand, short term borrowing, fixed costs and patterns of operating deficits.

The Comptroller’s Office did take into account the impacts of COVID-19 on municipality’s financial condition and found most weathered the storm without long lasting ramifications. Most, according to the report, made mid-year budgetary adjustments that helped the fiscal health. In Colonie, for example, every department was under a mandate to cut 10 percent from their respective budgets, part time employees were furloughed and there was a hard hiring freeze in place for most of the year.

Also, “rebounding monthly sales tax collections in much of the state supported local government’s bottom lines,” according to the report, “with many counties outside of New York City seeing only slight losses for 2020 compared with 2019, and collections in some counties even growing for the year.”

“Federal assistance, the restoration of state aid and resurging revenue have provided them much needed relief,” state Comptroller Thomas DiNapoli said in a statement. “However, those designated as stressed are less likely to have the flexibility to adapt to fiscal challenges long term. Local officials must budget and plan carefully to avoid fiscal stress and manage their communities through the uncertainties created by the pandemic.”

Nearly 175 local governments did not receive a score with the vast majority, 169, not filing data in time or not filing at all.