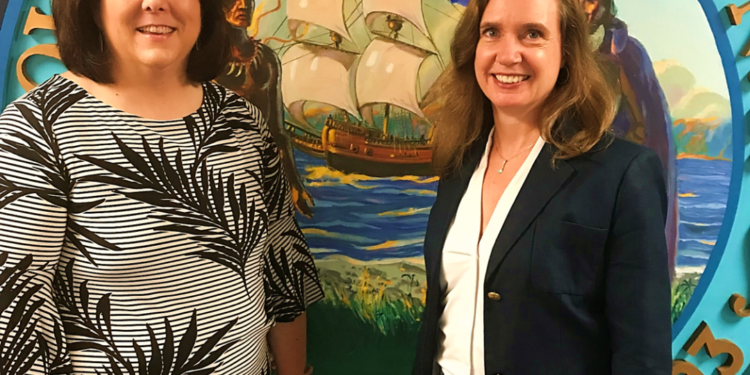 DELMAR — Victoria Storrs and Catherine Hedgeman were each elected as chair and vice-chairperson of the Bethlehem Industrial Development Agency, filling a recent vacancy at the top of the agency.

Members of the IDA elected Storrs and Hedgeman to the top two positions last month. Storrs becomes the first person to serve as chairperson since Frank Venezia was elected in 2005.

Venezia, who resigned earlier in the year, has been with the agency over the past 25 years.
The IDA provides financial assistance to eligible commercial and industrial projects in order to promote economic welfare and prosperity for the residents of the Town of Bethlehem. The IDA is responsible for the promotion, attraction and development of job and recreational opportunities and economically sound commerce within the Town’s borders.

“I’m honored to follow Frank Venezia as Chair and [I] will always be grateful for both his leadership and his mentorship,” said Storrs, who was appointed to the BIDA in 2012 and previously served as its vice-chair. “He always encouraged us to engage, deliberate, and be heard, so we could each give our best service to the town.”

Storrs is the president and founder of Storrs Associates, LLC, an economic development and development finance consulting firm headquartered in Bethlehem. She has assisted municipalities and their public and private partners for more than 20 years, working at First Albany Corporation, and then the Dormitory Authority of the State of New York and the New York State Environmental Facilities Corporation.

Storrs is joined by an accomplished lawyer who has experience with not-for-profits, businesses and economic development.

“I am honored and excited to become vice-chair of the Bethlehem IDA,” said Hedgeman, who leads her own firm at the Hedgeman Law Firm. Her firm holds the distinction of being a New York State Certified Women Owned Enterprise with offices in both New York and Washington D.C. From that position, she represents public authorities, not-for-profit corporations and businesses.
The attorney has specialized in real estate, economic development projects, and serves as general counsel to several area economic development and nonprofit corporations. Over the past ten years, she has served on a number of civic and nonprofit board of directors including the Downtown Albany Business Improvement District Public Relations Committee, the Albany-Colonie Regional Chamber of Commerce, the Center for Economic Growth, and the Community Foundation for the Greater Capital Region.

“The Town of Bethlehem is a great place to live and build a business and I look forward to playing a role in the future of economic development within the town,” she added.
Storrs has used her business acumen to share with others. She has taught at the State University of New York at Albany School of Business, and was an independent economic development consultant before joining Camoin Associates of Saratoga Springs, where she became their Development Finance Practice Leader.

“Ms. Storrs and Ms. Hedgeman have the skill and experience needed by the town to attract high-quality commercial and industrial jobs and investment appropriate for Bethlehem,” said Thomas Connolly, BIDA executive director.

It’s a changing of the guard the IDA has not seen in nearly two decades. Venezia’s place on the IDA allowed him a unique perspective on the town’s growth over the past quarter-century. Within his own term as chairperson, he played an essential role in creating the Vista Technology Campus.

“After years of false starts and delay, Mr. Venezia led the IDA to provide financial assistance to six projects in the campus, thereby making the campus a reality and a shovel-ready site for future commercial and industrial projects,” the Town shared in a statement announcing Storrs and Hedgeman’s appointments. The Town also credited the outgoing chairperson for creating a program that enabled small businesses to purchase personal protective equipment during the pandemic.

Venezia, a certified professional accountant with over 40 years of public experience, served as Chair of the Town of Bethlehem Industrial Development Agency and Chair of the State Board for Public Accountancy Peer Review Oversight Committee.

Venezia had worked with a wide range of nonprofit organizations, local governments and employee benefit plans throughout his career. He performed peer reviews for various CPA firms throughout the state. In 2015, he was hired as a Visiting Instructor of Accounting at The College of Saint Rose in Albany, and four years later, he became an Assistant Professor of Accounting at Saint Rose.