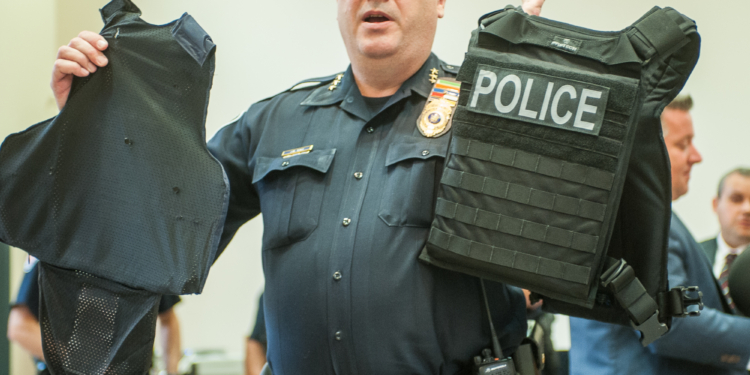 COLONIE — Police Chief Jonathan, after 32 years on the job and six heading up one of the busiest departments in the Capital District, is retiring at the end of next month.

“I have been lucky to have worked in Colonie where the department and officers have always received a tremendous amount of support and we appreciate that,” Teale said on Tuesday. “I worked for 32 years, worked hard for 32 years, and I can’t tell you how many vacations I had to cancel, or family events I missed because of work. We all know that when we sign up, but it is another thing to live it.”

The chief spent his entire career in Colonie and worked his way up from a rookie to taking over for Steven Heider in 2015, becoming the sixth chief in town history. His pension is maxed out, he said, and while he will miss working with the people in the department and in Town Hall and, he said it is “time to enjoy life.”

There are no immediate plans for retirement, he said, outside of spending time with his family and doing some boating and some fishing and some volunteer work.

The results of the test are due towards the end of the month. As per state Civil Service Law, Supervisor Paula Mahan, who appointed Teale, will conduct interviews and pick her recommendation for the next chief from the top three. The Town Board will then need to confirm the appointment.

“He has been her a long time and he has done a fantastic job and we are going to miss him. He brought he department to a very high level and that is something he should be proud of,” said Mahan, who is also retiring at the end of this year. “But he made his decision, and those types of decisions are always hard to make but obviously he is ready for it and with he and his family nothing but the best.”

There will be a walking out ceremony for Teale at the Police Department on Thursday, July 1. He will use some vacation time and then officially retire at the end of July.

Teale is an outspoken critic of the so called bail reform passed by the state Legislature in 2019 that went into effect last year. In theory, it levels the playing field for those with enough money to make bail and those who do not by eliminating it for a host of crimes and rather than allowing a judge to set bail, the perpetrators are given appearance tickets.

“I may have stayed for another year or two, but it’s been a tough year,” Teale said. “I was able to convince the Town Board to hire more officers and we effectively reduced crime in town and that has been reversed due, in large part, to our state Legislature — 30 to 40 percent of the people who get an appearance ticket don’t show up. People who are involved in criminal conduct understand there are little or no consequences for their actions.”

He pointed to the rampant gun violence in cities around the state including in the Capital District and in Colonie there were two homicides this year and two attempted homicides, a previously unheard of number for the Capital District’s largest suburb. In 2020, Colonie police confiscated 26 illegal handguns, shattering the previous record of 11 set in 2015.

“I don’t think the public understands the ramifications of this,” he said. “It will ultimately impact the quality of life in this state and it is already beginning.”

He said through bail reform, the Legislature essentially gutted the third branch of government, the judiciary, and established what he calls a system of “catch and release.”

“It wasn’t like we were sending 16-year-olds to jail. We were very judicial, and we always had that third leg of government to keep things in check. That has all gone away, he said. “We arrested 26 people for illegal handguns and you can’t blame the guns. The problem is our legal system that is allowing these people back on the streets.”

When Teale began his career more than three decades ago, police were nearly universally admired and respected for the work they did. That, too, has changed over the past year and a half — following the terrible murder of George Floyd at the hands of a Minneapolis police officer — with the near constant cries to “defund the police” and the governor’s directive for every municipality that has a police department to do a comprehensive review of how they do business.

He said the Colonie Police Department, which fields some 75,000 calls a year not including fire and EMS calls, has largely avoided the anti-cop sentiment rampant in some parts of country and the Capital District.

“We have always had the support of the administration and, more importantly, the residents,” he said. “We have both political flavors in town and town government still seems to works pretty well. They all work well together, and with us, and the focus is on getting things done and it ultimately makes Colonie a nice place to live.”

It is a stressful job, he said, because generally people don’t call police when things are going good. While he has not been on patrol in some time, the stress is multiplied because as chief you are concerned with 114 other officers and what they are going through.

“The level of risk has increased over the last few years. It’s always been there but it is getting far greater. There are not a whole lot of jobs where you have to work and wear body armor to work,” he said. “Police officers are exposed to a lot of experiences and incidents and unfortunately much of it is negative. We are here to help people and enforce the laws but people don’t call the police when they are happy. They call the police when they are victimized or in a terrible situation.”

During his tenure, he upped the number of sworn officers to 115, up two from when he started and up from 107 in 2008, through grants and forfeiture funds, he added new equipment and programs, like an armored rescue vehicle and created one of the first drone fleets in the state. He also put an emphasis on specialized training.

“We really have become a regional asset to municipalities in the area,” he said. “It’s a team sport, it is not just must me. Trust me on that. And that is why I can retire. The department was strong when I got here, I did my best to make it better, and I know full well the department is in good hands because we have good people here.”