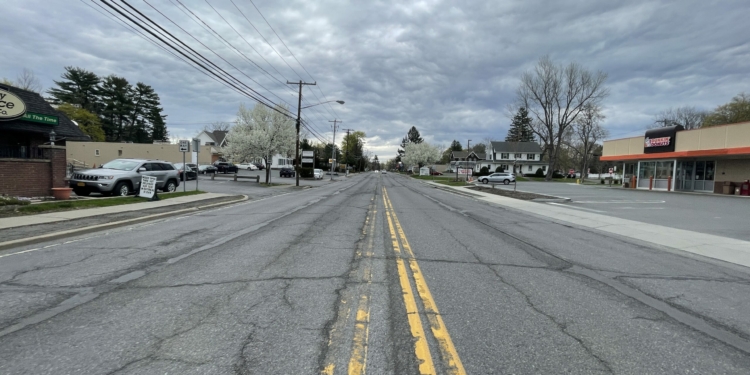 DELMAR — Should Bethlehem Town Board members rescind-and-revote on the resolution to fund its Delaware Avenue Complete Streets project, it will do so with the confidence of a state Supreme Court decision dating back to 1959.

The Town Board is expected to take the first step towards that action once it meets again on Wednesday, June 23.

The Town Board first voted to pass a $5.2 million bond resolution that would approve funding of the road diet. Business owners, including those in Delaware Plaza, have long protested against the project over concerns it would choke off customer traffic. Last month, those same proprietors aided a successful petition drive to force the resolution to a referendum at a special election by no later than August.

A referendum without petition was initially proposed by Town Board member Jim Foster after the board passed the resolution on April 14. Foster, an Elsmere resident and member of the hamlet’s volunteer fire department, has voiced his opposition to the road diet since at least his failed attempt to seek the town supervisor position from John Clarkson in 2015. The Republican’s motion was not supported by another board member — all of whom are Democrats.

With the Town obligated under state law to hold a special election, Supervisor David VanLuven suggested the board take steps to hold the referendum during the General Election in November. Town Attorney Jim Potter shared a proverbial road map that would allow just that. It requires the Town Board to first repeal its original resolution vote on Wednesday night, followed by a vote on July 28 to hold a referendum without petition. Assuming board members pass both votes, the referendum would fall on Election Day, Tuesday, Nov. 2.

The move draws from the actions of a Long Island town board in 1959. The Town of Islip had pushed to erect an incinerator to address its 360-ton daily yield of garbage. Voters shot down separate proposals for two locations. Less than a month later, the board passed a plan to build one at a third location through a permissive referendum. Opponents, however, forced that to a public vote, too.

The proposition went to the polls but not before the board rescinded its original vote. According to an opinion published that year by New York State Supreme Court Justice D. Ormonde Ritchie, the board never explained why.

On the same night it repealed its original resolution, the Town Board set a date for the special election that exceeded one mandated within the window of time following petitions. The Republican-led board faced a strong NIMBY-movement backed by Islip Democrats who garnered more than 6,000 signatures against the permissive referendum. Their effort was also backed by a contingent of key Republican party figures that included the town’s Republican party chairperson.

The plan passed in all but three of the town’s hamlets. Of the 30,000 registered voters, less than 7,000 took to the polls in the April election. The district in which the incinerator was later built opposed the measure by an 8-to-1 ratio. Opponents followed with a lawsuit under the claim the vote didn’t take place within the time defined by when they submitted their petitions. The state Supreme Court disagreed.

Islip opened its incinerator in 1963 only for it to close down five years later.

“The important thing about the case is that it confirmed that a Town Board has the authority to repeal a resolution that is subject to a referendum at a special election following the filing of a petition,” Potter wrote to The Spotlight, “and [it] has the authority to adopt the same resolution and provide for a referendum election at a later date.”

The Complete Streets project has become a political football of late, punctuated two weeks ago by board members debating whether to hold the referendum in a special election or during the General Election.

Town Democrats have pushed the merits of the project, backed by a commissioned engineering report. The 103-page report from Albany engineering firm Crieghton Manning cites more than 200 accidents along the 1.3-mile corridor of road over a five-year period. Residents living just off of the busy roadway voice wishes for safety. VanLuven has campaigned its promise for increased safety in his monthly column in Our Town over the past few months.

Republicans have lobbied on behalf of store owners who fear the road diet will reduce the number of vehicles and potential customers. Marti McHugh, owner of Delmar Laser Spa, went as far as to say the board has established an “adversarial stance” towards business. While others claim it won’t listen to their concerns. “We care about the safety of our customers. We’re employers. And, you guys represent us just as much as you represent any cyclist or anybody else,” she said.

Foster said earlier this month that he’d propose reducing the speed limit to Delaware Avenue from its current 40 mph limit before resorting to a road diet. VanLuven rebuffed the comment during the June 9 Town Board meeting, adding that there has been a lot of misinformation about the project.

“Personally, my goal is not just lowering the speed limit, it’s lowering the speeds,” VanLuven said, arguing that changing speed limits don’t necessarily change driver behavior. “Changing the signs, that’s nifty. … That’s why I personally believe we have to have a more comprehensive approach to safety rather than an overly simplistic approach; which, time and time again, has been demonstrated across the state — and the DOT backs us up — doesn’t work.”

Board member Joyce Becker attempted to argue the merits of the road diet by using Route 9 in Loudonville, purposely dissuading past comparisons to Albany’s Madison Avenue, as an example of a successful Complete Streets project. However, the two-lane stretch of road she described around Newton Plaza was never the subject of a road diet.

Foster, one of two practicing attorneys seated on the Town Board, disagreed in principle with the proposed steps to rescind April’s resolution, calling it “creative gymnastics.” The difference in opinion resulted in a back-and-forth between two candidates whose names will appear on the November ballot; Foster, the Republican Town Board candidate, and VanLuven, the Democrat candidate for Town Supervisor.

“I don’t think there is any particular date that’s a magic one,” Foster said, “what I always look for is not merely getting the most voters out there, but more importantly, more critically, I think we want the most informed voters to get out. … We don’t want folks just blindly voting along with seven other referendum items, whether it would be for or against. I want the decision to be based upon those who have done their research. That are motivated either for or against the referendum or the project, to come out and make their voices heard.”

“With all due respect, David, if you’re interpreting or trying to twist my words into saying that…”

“I didn’t twist your words, you just said it.”

“… I would ask that you get less excited.” Foster added. “The highest and the best goal is to have the most informed voters coming forward. I was certainly not proposing, nor suggesting, that anyone was going to deprive or should encourage to deprive people the right to vote.”

Foster closed his argument by then quoting from former Town Supervisor John Clarkson, a Democrat, who argued against holding a November referendum in 2013 to allow voters to decide if the highway superintendent position should continue to be an elected position. Residents voted on that issue during a special election after Clarkson contested a November referendum would cause voter confusion and discord. The Republican then said those in favor of the November referendum intend to cause confusion.

“It is absurd to claim that this effort to move the vote to November is about voter access,” he said, “when those making that claim intentionally sought to keep this matter from going to a referendum in the first place.”

Board member Dan Coffey argued against Clarkson’s words as spoken by the Republican.

Proponents for the rescind-and-redo action anticipate more residents will vote in November than in August. In May 2013, when residents decided through a special vote to keep the town highway superintendent job as an elected position, less than 6,000 people voted. In the 2019 General Election, more than 18,000 residents decided a political race between board candidates Dan Coffey, Joyce Becker and Jim Carriero.

The 2019 General Election was also conducted throughout the town’s 31 districts, allowing more access for residents throughout town. In contrast, the 2013 special election was limited to just one polling station, Town Hall. Clarkson had said the Town could not garner enough volunteers to operate multiple polling stations. He had also shared that the $10,000 cost of a ballot-scanning machine could not be afforded — the same figure VanLuven cited as an expense he’d prefer to avoid.

“It was a joke,” Coffey said. “It was an unmitigated disaster.”

Despite Foster’s concerns for it sparking a potential lawsuit, the town attorney later expressed his confidence in a letter to The Spotlight.

“The Bethlehem Town Board has the authority under the Town Law to repeal its April 14 resolution calling for bonding of the Delaware Avenue Complete Streets project,” stated Potter. “If the Town Board repeals the April 14 vote at its regularly scheduled meeting on June 23, and then votes at its regularly scheduled meeting on July 28 to fund the project and hold a referendum election… I believe an article 78 proceeding challenging this procedure would be unsuccessful because the procedure follows the clear statutory language of Article 7 of the Town Law.”