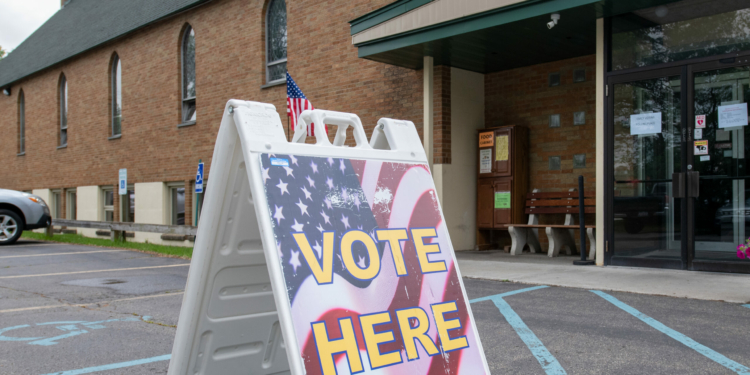 A sign outside the Pine Grove United Methodist Church on Central Avenue advertising that it is hosting early voting for the 2021 primary culminating on June 22. Jim Franco / Spotlight News

ALBANY — Early voting kicked off across the county on Saturday, June 12.

For those voters eligible to vote in a primary, polling locations are open at the Albany County Board of Elections on Pearl Street in Albany; the Berne Volunteer Fire Company on Canaday Hill Road; the Bethlehem Lutheran Church on Elm Avenue; the Boght Community Fire Department on Preston Drive, the Guilderland Fire Department on Western Avenue and the Pine Grove United Methodist Church on Central Avenue in Colonie.

Any eligible voter in Albany County can vote at any of the above locations. Poll workers are able to generate a paper ballot for any specific location in Albany County once the voters’ information is loaded into a computer.

Primary Day is June 22, and polls are open across the county at traditional locations. They are open from 6 a.m. to 9 p.m.

In Colonie there are only primaries for the three open judicial seats on the Town Court.

The three Republicans and Green are running a primary for the Conservative Party line.

Massry and Sommers are incumbents while the other four candidates are making their first run for the bench.

Turnout was very low at two polling places on Saturday, the first day polls were open. The empty rooms were in sharp contrast to October 2020 when hundreds of people came to the polls early to vote for or against the polarizing President Donald Trump.