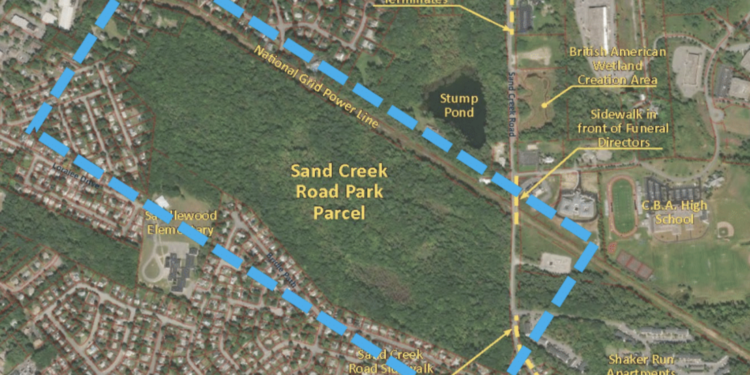 COLONIE — The town is creating a park on 125 acres of environmentally sensitive land along Sand Creek Road.

The town has owned the land since Mike Hoffman deeded it over in 2013 as part of the mitigation fees associated with constructing a hotel — the Staybridge Suites on Wolf Road — within the Airport GEIS. It already includes informal trails and paths but there is currently no formal access to the site and without any oversight or set boundaries there has been some illegal dumping.

The Planning and Economic Development Department held two public hearings to get input on how best to access the site, utilize the site and preserve the wetlands and other sensitive areas located on the site.

“It will not be like The Crossings or other parks where there are playgrounds and pavilions and basketball courts,” said PEDD Director Sean Maguire. “The whole idea is to keep this a primitive and natural space and it will make a great escape to nature for residents right in the middle of town.”

Some comments during the two public hearings on Tuesday and Wednesday, June 8 and June 9, include not allowing motorized vehicles like mini bikes or snow mobiles, not allowing hunting and no picnic tables. Some were against the park because they are worried about the negative impacts it will have on the wetlands and animal life and others are concerned about safety of the residents if more people are hiking in the woods near their homes.

Others, though, wanted to see more connections and access provided for the people who live around the park on residential streets like Bridle Path and Furlong Drive.

One of the first next steps, Maguire said, is to work with the Department of Public Works to design and build a public parking lot probably along Sand Creek Road near the Shaker Run apartments access road.

Also, the development of a formal trail system will begin on the east side of the park to try to get some more greenspace between the formal trail and the residences so there is a better buffer than what exists now with the informal trails people have cut through the woods.

Eventually, he said, there will be some better connections to the park from neighborhoods and to other parks in the area like the Ann Lee Pond. There are also plans for some new sidewalk along Sand Creek Road to fill in the gaps that now exist.

“This is a good opportunity to create the small system of greenspace in that part of town,” Maguire said. “It is important for people to understand it was identified as a potential park 30 years ago and sometimes it is a long slow process to implement plans in town.”

There is about $150,000 to work with thanks to other mitigation fees paid by developers building within the Airport GEIS.