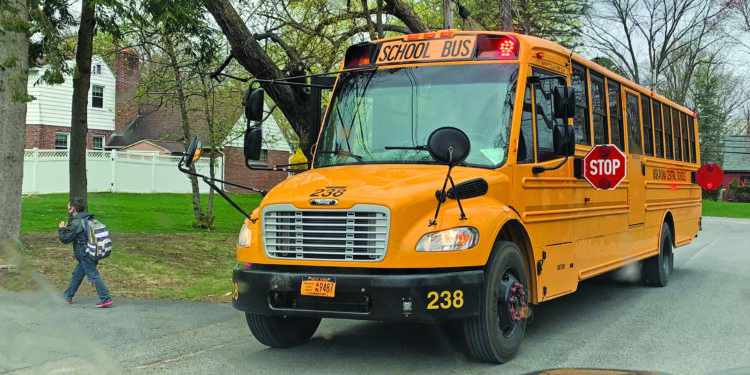 ALBANY — The county Legislature passed a Local Law that would install cameras on school buses or in stationary locations to record drivers passing the busses as they discharge or pick up students.

Prior to a state law, the School Bus Camera Safety Act of 2019, the only way to penalize a driver for inappropriately passing a school bus was for the driver to spot the vehicle and report it to police. Without video evidence, the already cumbersome procedure is based on just the eye witness account of a bus driver and rarely resulted in any consequence to the driver.

“This law protects children and families at their bus stops and does so at no cost to the schools or the county,” said Albany County Legislator Matthew Miller, who sponsored the bill. “Drivers passing stopped school buses is a way too common occurrence and I believe this bill, combined with strict enforcement, will become a deterrent to these impatient drivers who put so many lives at risk every day.”

A number of jurisdictions across the state and country have since enacted similar legislation in response to a growing concern over the number of violations that actually occur.

School districts across the county can opt into an agreement with the county for the installation, maintenance and use of bus photo violation monitoring systems.

According to the Governor’s Traffic Safety Committee, an estimated 50,000 or more drivers illegally pass school buses every day. The American School Bus Council reported that more school-age pedestrians are killed between 7 and 8 a.m. and 3 to 4 p.m. than at any other time of day. One third of children killed outside the school bus are between five and seven years old.

The fine for passing a stopped school bus ranges from a minimum of $250 for the first offense, $275 for a second offense if the violation committed within 18 months after the first, and $300 for a third or subsequent offense. The vehicle owner will get charged an additional $25 for failure to respond to a notice of liability within the prescribed time period.

The legislation takes into account the privacy of drivers, passengers, pedestrians and cyclists who may be captured in a photograph by a school bus photo violation monitoring device and requires the County to adopt measures that protect an individual’s identity.

The state law allowing the county to do install the cameras only extends to those school districts not wholly contained within a city, but allows those cities to pass similar legislation.