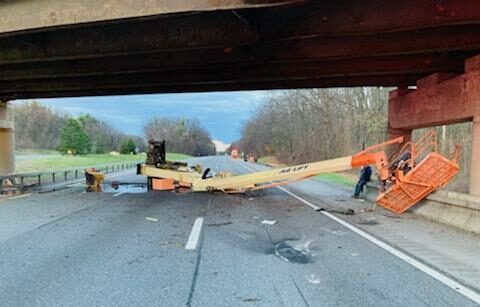 CLIFTON PARK — State Police say a Colonie man was ticketed for hitting a bridge crossing the Northway, closing all southbound lanes for more nearly a day.

George Gizzi, 56, was driving in the right lane on Wednesday, April 14, at around 6 a.m. when the load he was carrying hit the Sitterly Road overpass at Exit 9 causing extensive damage. Two southbound lanes were open on Thursday morning but according to the Shenendehowa School District, repairs will take three weeks and the east and west ramps of Exit 9 will remain closed for the duration.

Gizzi was issued a ticket, but it is not clear of the infraction.

According to the State Police, the boom lift on the trailer Gizzi was driving had raised and hit the bridge. The boom lift fell off the trailer and came to rest across all three lanes.

All Traffic was diverted off the Northway at Exit 10 all day Wednesday until the bridge was shored up and the two lanes were open. Traffic on the Northway is only open to passenger vehicles.

BETHLEHEM LIBRARY: A little help from our Friends