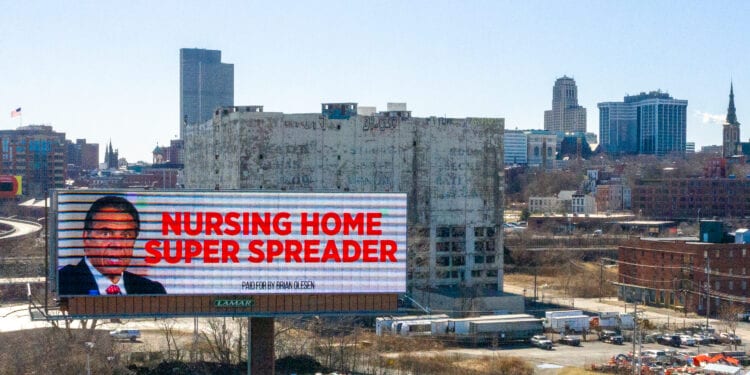 A billboard along 787 in the City of Albany. Jim Franco / Spotlight News

COLONIE — Despite growing calls by elected officials on both sides of the aisle, New Yorkers, by a 50 to 35 percent margin, do not think Gov. Andrew Cuomo should immediately resign according to a recently poll by the Siena College Research Institute.

Nearly half, 48 percent, think he can still do an effective job while 34 say he cannot. According to the poll, 35 percent say he did commit sexual harassment and 24 say he did not with 41 percent of the voters still undecided.

For the first time in months, more New Yorkers rate him unfavorably, 45 percent, than favorably, 43 percent, and only a third of those polled say they would re-elect him to a fourth term. In February, his favorability rating was 56-39. Similarly, his job performance rating is now upside down, 43 to 45, compared to 51 to 47 a month ago.

Among members of his own party, Cuomo’s favorability rating dropped a net 31 points and his re-elect dropped fell by a net 33 points. Only 46 percent of Democrats now want to re-elect Cuomo, compared to 40 percent who want someone else, down from 65-26 percent last month.

“Nearly two-thirds of Republicans say Cuomo should resign, however, 61 percent of Democrats and 46 percent of independents, a plurality, say he should not,” said Siena College pollster Steven Greenberg. “A majority of New York City voters and a plurality of voters from both upstate and the downstate suburbs say he should not resign.”

Seven women, all considerably younger than the governor and all but one who were working for him, have accused the governor of sexual harassment and one claims the governor groped her in the executive mansion. Attorney General Letitia James has appointed two attorneys to investigate the allegations while state lawmakers and Congressional representatives have called on the governor to resign.

Voters continue to approve of the governor’s overall handling of the pandemic, 60-33, which is virtually unchanged from a month ago. But, when it comes to making public COVID-related nursing home deaths, voters give him a negative grade, 27-66.

How the state reported deaths in nursing homes continues to an issue with the most recent reports saying the governor’s staff altered Department of Health data to make the numbers look better than they were. That revelation directly contradicts the governor’s excuse of not having the data as his reason for not releasing it. At issue is the state’s underreporting of nursing home deaths by as much as 50 percent by omitting, deliberately or not, residents who died at the hospitals and not in the nursing home facilities.