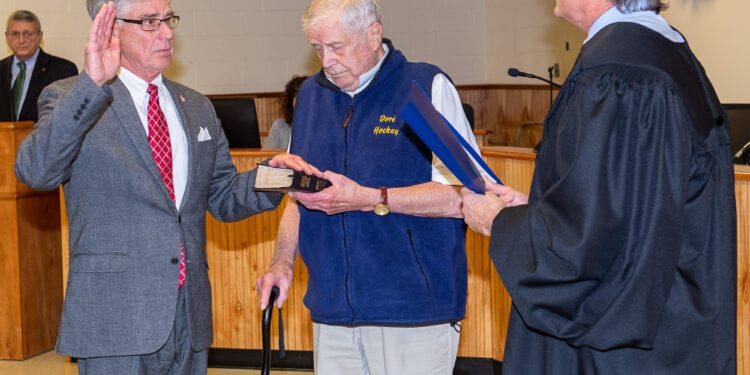 Fred Field holds the Bible as his son, Rick Field, is administered the Oath of Office to serve on the Colonie Town Board by Judge Peter Crummey in January, 2020. (Jim Franco / Spotlight News)

Fred Field, a former assemblyman and 18-year Town of Colonie supervisor, died on Friday, March 12. He was 88.

Field was born in Albany and attended Watervliet High School and Albany Academy. He was awarded an honorary doctorate of humane letters from Siena College and was an industrial engineer at AL Tech Steel Corporation for 30 years.

He began his political career in 1961 as a Republican Party member of the Colonie Town Board. In 1968 he was elected to the state Assembly and a decade later he was elected town supervisor, a position he held until 1995. After handing the reigns to his deputy, Mary Brizzell, he became president of Capitol Hill Management, where he worked until he retired.

“Fred Field was a great and visionary leader for the Town of Colonie and a friend to all,” said Albany County Legislator Paul Burgdorf, who served on the Town Board when Field was supervisor. “Many of the programs and facilities we take for granted today were started and expanded by Fred. He was a role model for many of us who had the opportunity to serve with him, and his passing is a sad day for the Town of Colonie.”

In 1983, one of the town’s most notable homes was saved from the wrecking ball when Field convinced the Town Board to purchase the Pruyn House for $110,000. The complex has since grown to include two barns and a school house and the historic Pruyn House has undergone significant renovations and is the most significant historic structure Colonie.

Field headed up the town during a time of prosperity and growth and it became a bastion of Republican strength in Albany County, which has been dominated by the Democrats for more than a century. But the town finances were an issue when Supervisor Paula Mahan defeated Brizzell in 2007 and the town has remained controlled by Democrats since.

“Fred set the example for many of how a public officials should serve in office — with integrity and fairness,” said longtime Albany County Republican Chairman George Scaringe, who ran against Mahan two years ago. “Known in Colonie as ‘Mr. Supervisor,’ he was well liked by the residents of Colonie and he had many friends and supporters. On a personal basis we have been friends for 63 years, he was a mentor, advisor and supporter. His passing will leave a huge void in my life and I will miss him.”

Field served on several boards throughout his career including: the state Cancer Society, Cohoes Savings Bank, Environmental Facilities Corporation, Capital District YMCA, Troy YMCA, United Way, Capital District Transportation Committee and the Regional Planning Commission. He was a member of the Latham Rotary and was a current member of the Glens Falls Rotary at the time of his death.

He was a Paul Harris Fellow recipient, was active in the Boy Scouts of American and a Silver Beaver recipient. He was president of the town Pop Warner Little League and coached in the Latham Little League. He was a member of the Shaker Road-Loudonville Fire Department.

He is survived by his wife Mary Ellen Breen Field and seven children, including his son Fred (Rick) Field who serves on the Town Board, and 21 grand and great-grandchildren.

Services are private. The family is asking memorial contributions to be made to High Peaks Hospice, 454 Glen St. Glens Falls, NY, 12801, or by visiting highpeakshospice.org.

SPOTTED: Shaker gets by Colonie in end of year scrimmage