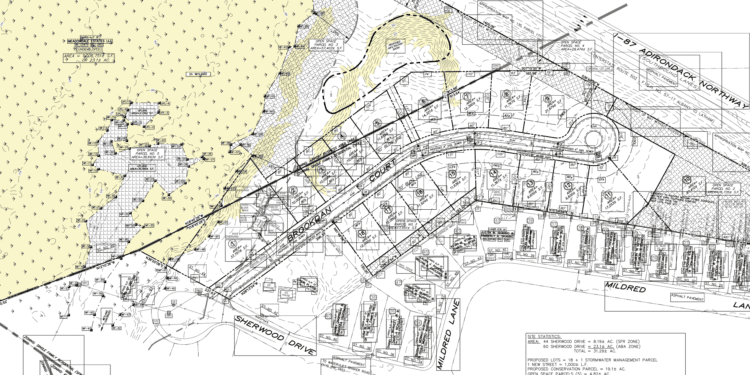 COLONIE — A plan to build 17 homes on 31.3 acres off Sherwood Drive was sent back to the drawing board after concerns were raised on density.

The developer, 44 Sherwood LLC, is asking for a conservation subdivision, which allows more density but requires a percentage of the land be left untouched. The idea is to promote and preserve greenspace.

Under a conventional subdivision, each lot must be 18,000-square-foot, but that is flexible under a conservation subdivision provided the greenspace it preserved.

Town Engineer Joe Grasso said by his calculation, only 16 units are allowed to meet the required preservation of 40 percent of the unconstrained greenspace. Unconstrained is lands that can be built on and not wetlands or those that present significant topographical challenges to construction. There are 17 homes proposed with one lot set aside for storm water management.

The plan was sent back to the drawing board and Sipperly and the Planning Department will work out the math before it comes back for another sketch plan review.

The plan would combine two parcels of land with more than half located in the Airport Business Area and the rest zoned Single Family Residential. Six of the proposed lots would encroach on the ABA zone and would need a use variance before construction can start.

The majority of land within the ABA zone are considered constrained and Sipperly said it would remain greenspace and donated to the town or a land conservation organization. When that constrained land — which homes cannot be built upon without a variance — is factored into the equation, some 77 percent of the land will be open space, he said.

“Our proposal is to develop 17 new lots and they are in line with the existing lots in Beverly Park, a developed subdivision — an old established subdivision probably developed in the 80s,” he said. “Our goal tonight is the planning board to see the merits of a conservation subdivision of this parcel.”

Other issues involve the proposed 50-foot buffer between the proposed homes and the Northway. Grasso said it may not be enough to buffer the homes from Northway traffic and may contribute to a lack of privacy.

Sipperly said there is an additional 30 feet of wooded land between the end of his property to the actual Northway for a total of 80 feet between the nearest property line and the highway.

Planning Board member Chip Ashworth said he stopped along the Northway near the project and could see the back of the homes of another subdivision on Mildred Lane.

“Once you start clearing land it won’t be as dense as you think it is and I think there will be a problem with noise from the Northway,” he said.

Sipperly said there are a number of homes along the Northway corridor that have less buffer than what he is being proposing.

The proposed cul-de-sac, Grasso said, which does not have homes all the way around it, is also too close to the Northway.

Another issue is the lot set aside for storm water management is higher than the other lots so it will need excavation before it is suitable. That, Grasso said, would require soil samples first.

“There are some calculation discrepancies that need to be worked out, and the 50-foot buffer is insufficient and there needs to be a tree survey done,” said Planning Board member Craig Shamlian. “It strikes me that while this may technically meet some of the requirements but I don’t know if it meets the spirit completely. It seems like you have too many lots.”

It was agreed that the developer would come back for another sketch plan review and also bring a conventional subdivision layout to compare what it looks like next to a conservation subdivision.

Brown School, The Outer Loop team up for empathy project