Brown School, The Outer Loop team up for empathy project 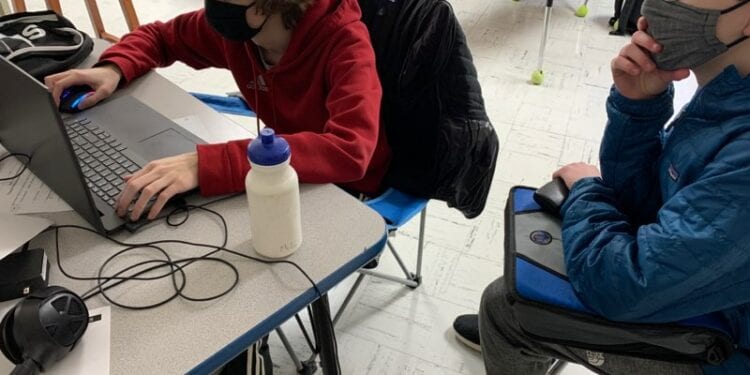 SCHENECTADY — In a world as divisive as the one we live in, empathy is hard to find and even harder to practice.

Despite the many factors that our nation finds dividing us, students from Brown School have joined forces with The Outer Loop Theater Experience to demonstrate how the past year’s turmoil has affected them and how we can be better at reaching out to one another. It poses the question, “Can we, through theater, inspire empathy and reconnect to our shared humanity?” The project benefited the Schenectady Community Action Program (SCAP); tickets to the virtual viewing quickly sold out and a donation of over $1,200 was made to SCAP.

The Empathy Project was filmed at the school on Jan. 31. During taping, “we gathered stories from Brown School students and faculty,” the event page said. “Then, through words, music, dance, poetry, film and visual art, we curated, devised and assembled this live theatrical experience. The production includes both live and pre-recorded performances of stories from students and faculty, all surrounding their experiences of the crises we’ve faced together throughout 2020.”

Program creator Rachael Yoder, who is also the managing director of The Outer Loop, said she and her husband, The Outer Loop founder and artistic director Michael Herman, were compelled to team up with Brown School after researching its website. A native of Niskayuna, Yoder is currently in another state for her education but was drawn to the Schenectady private school because of its mentions of diversity on its website. Right in the “about us” section, school staff describe Brown School as a place where anyone, regardless of race, gender, orientation or identity can feel accepted and valued. As tensions have spiked over racial strife and the rights around the LBGTQ+ community, Yoder said she was impressed with how baked in the idea of diversity is at the school.

“I’ve known the head of Brown School for a while and after two other installments of this project, I knew Brown School was going to be a wonderful fit,” Yoder said. “Theater is a powerful form of storytelling and since the subject matter is around something so personal, it helps students take a mindful approach to express empathy and the different struggles they’ve faced.”

Will McLeron and Maya Coons, both sophomores at Brown School, found the project as a cathartic way to visit some of the tougher topics in society. Coons and a friend centered their presentation around the societal differences and double standards between men and women; the students wanted to show how each gender was treated differently in a similar circumstance. McLeron took a recent event and made it hit home; he filmed different scenes from “Battlefield 1,” a video game, and used them to demonstrate the riot at the United States Capitol on Jan. 6, when supporters of former President Donald Trump unsuccessfully tried to interrupt the certification of electoral college votes from the November election. McLeron said he wanted his presentation to center around the idea that “democracy is hard-earned but easily lost.”

Teresa Burke, the director of the upper school at Brown School, said her students were excited to work on the projects because it allowed them to put a voice to emotions and experiences we’ve collectively been going through in struggled silence.

“I was so impressed when one of our ninth-graders was speaking about giving grace and being patient, which is something we struggle with in this society,” Burke said. “We’re all going through something. There’s a lot on everyone’s mind and we’re all trying to muddle through this collective crisis the best we can.”

Coons and McLeron said they want to see people practicing kindness in places they normally wouldn’t. By reaching out to others and trying to empathize with those tough emotions, the sophomores said people can actively practice becoming more purposeful with the way we communicate.

“The way these students communicated with one another and with the audience was something that I knew would shine from their experiences at Brown School,” Yoder concluded. “The core of this project was to set out and learn about other people’s experiences and not only were these students primed to do that, but they were able to demonstrate those experiences on an extremely visceral level.”