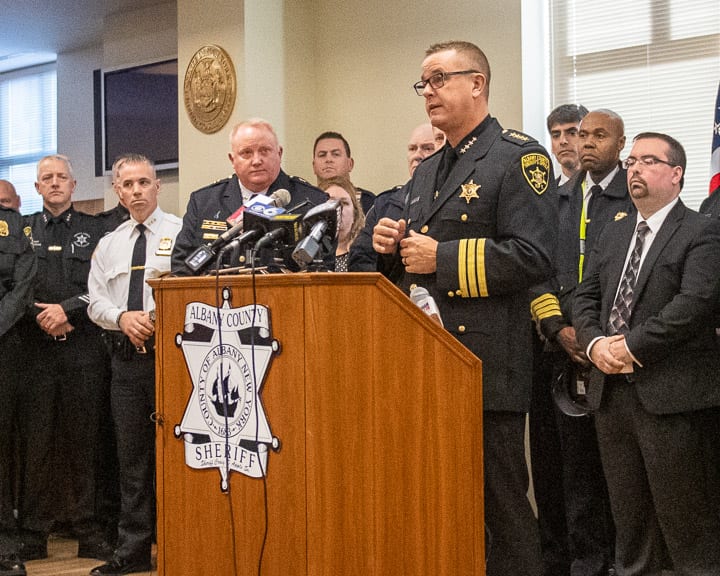 ALBANY — The county anticipates saving up to $4 million by establishing its new 911 dispatch center at the former Clarksville Elementary School.

The Albany County Legislature sent the resolution supporting $9 million in bonds to its audit and finance committee last month after Sheriff Craig Apple requested a change in plan. The new dispatch center was to be housed near the county-owned nursing home in Colonie.

Virus-related shutdowns have impacted municipal governments dependent on taxes collected from retail sales to theatre ticket sales. Local governments are slammed, too, by state aid reduced by what The New York State Association of Counties estimates to be a $62 billion, four-year shortfall.

In an effort to save money, Apple submitted a request in July to change plans to build an estimated $13 million dispatch center in Colonie and move it to Clarksville. Approximately $3 million would be saved by avoiding costs to match outside aesthetics with the nursing home.

The sheriff’s department dispatch duties have expanded exponentially since it launched in the early 1990s. From fielding calls for one agency and about a dozen emergency response and fire districts, it now manages emergency calls for six police agencies and twice as many EMS departments.

The former Clarksville Elementary School has served as one of the department’s substations since 2012. The sheriff’s department moved into the school after Bethlehem Central School District closed it the year before. The district later sold the school in 2018 in a deal that included a combination of cash and in-kind services from the law enforcement agency.

Pending an environmental review, construction is anticipated to begin early next year.

DELMAR — Bethlehem Central said it would resume with everyday activities after receiving word of a second COVID-19 case linked to its high school.

District administrators were notified that a second person from the high school tested positive by the Albany County Department of Health on Saturday, Oct. 10. The latest case was of a person who last visited the campus on Friday, Sept. 25. The health department had also reported that there was no exposure at the school that would require contact tracing.

Albany is killing our cinemas

Falvo’s sold to Fred the Butcher