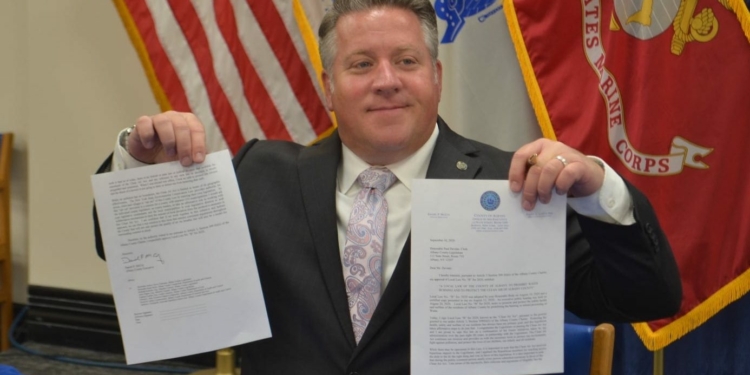 “I want to thank the Albany County Legislature for its partnership to prevent the burning of hazardous waste like PFAS through the Clean Air Act, including the Republican members who crossed the aisle to make it a reality,” McCoy said. “Air pollution has no county or state boundaries.”

Local Law B will prohibit waste disposal facilities from burning or processing certain kinds of waste, including but not limited to garbage, hazardous materials, automobiles and electronic waste.

Judtih Enck, a former EPA regional administrator who has been vocal throughout the deliberation of the new law, expressed her gratitude in an online statement.

“Thank you Dan McCoy for signing this clean air bill,” Enck stated. “Preventing tire burning and toxic air emissions from burning AFFF will protect the health of hundreds of thousands of people in the region. And thanks to the Albany County Legislature.”

The Clean Air Act carries a penalty of a violation and fines up to $2,000 or imprisonment of no more than ten days for the first offense. A second penalty would be considered a misdemeanor and carries a fine of $5,000 or no more than 30 days in jail. The signed legislation goes into effect once filed with the Secretary of the State.

Opponents of the proposed law expressed concern over the legislature overextending its responsibilities, usurping state and federal regulations, leading to the threat of future lawsuits from two of the companies it seems to target — LafargeHolcim in Ravena and Norlite in Cohoes.

Similar laws as the one passed by the legislature in Maryland and Pennsylvania have been contested in court leading concerns over future litigation. McCoy squashed those concerns in his written statement before signing the bill.

“I am aware of the naysayers, their criticism and arguments of illegality, but the truth is that as of today, there is no federal or state law or judicial decision that prohibits the enactment of the Clean Air Act,” McCoy stated, “and any reference to any such law or decision is simply misguided and misplaced. When I was elected into office, I took an oath to protect our citizens and the threat of a lawsuit is not going to deter or detract me from honoring that oath.”

“I am a proud original sponsor of the Clean Air Act and was delighted to see that County Executive McCoy signed this local law, which prevents tire and waste burning, and the burning of noxious fire foam,” she said. “This victory is the result of the hard work of hundreds of neighbors, community members and clean air advocates, who made their voices heard that clean air and environmental health are non-negotiable and should be protected.”

The Bethlehem Democrat introduced the act, along with William Reinhardt, Jeffrey Kuhn and Matt Miller of Bethlehem; and Vicky Plotsky of Clarksville, before it was passed by legislators in August. The new law will impact the LafargeHolcim plant located just south of Bethlehem.

A spokesperson for LafargeHolcim was not immediately available for comment.

In February, Norlite was discovered to have burned controversial firefighter foam it received through a contract with the U.S. Department of Defense. Elements of the PFOA and PFOS chemical compounds, known as “forever chemicals,” were detected by a university-led study of the surrounding community of Cohoes. The kiln stopped burning the compound after the city placed a moratorium on the practice. The company has refrained from comments as it is now facing multiple lawsuits.

LafargeHolcim had received a DEC permit to burn tires at its cement processing plant in Ravena. Before it was to start incinerating shredded tires imported from Connecticut, the Town of Coeymans passed a local law similar to that drafted by Albany County. The company has argued that tire-derived fuel is “environmentally progressive” and is permitted through state and federal regulations.

The Switzerland-based company had received approval from the state Department of Environmental Conservation in 2006 to accept up to 4.8 million tires a year. That permit was previously reported to have expired two years ago. A company spokesperson said it still holds a Title V permit through the EPA.

Lafarge’s kiln system went through a substantial $500 million upgrade in 2016. That upgrade stemmed from a 2010 settlement with the EPA, in which Lafarge and two of its subsidiaries agreed to spend up to $170 million to install controls that would reduce emissions of nitrogen oxide and sulfur dioxides at their cement plants across the country.

Legislators passed the bill with a 32 to 7 vote last month.

TRIPLE THREAT: Are we there yet?