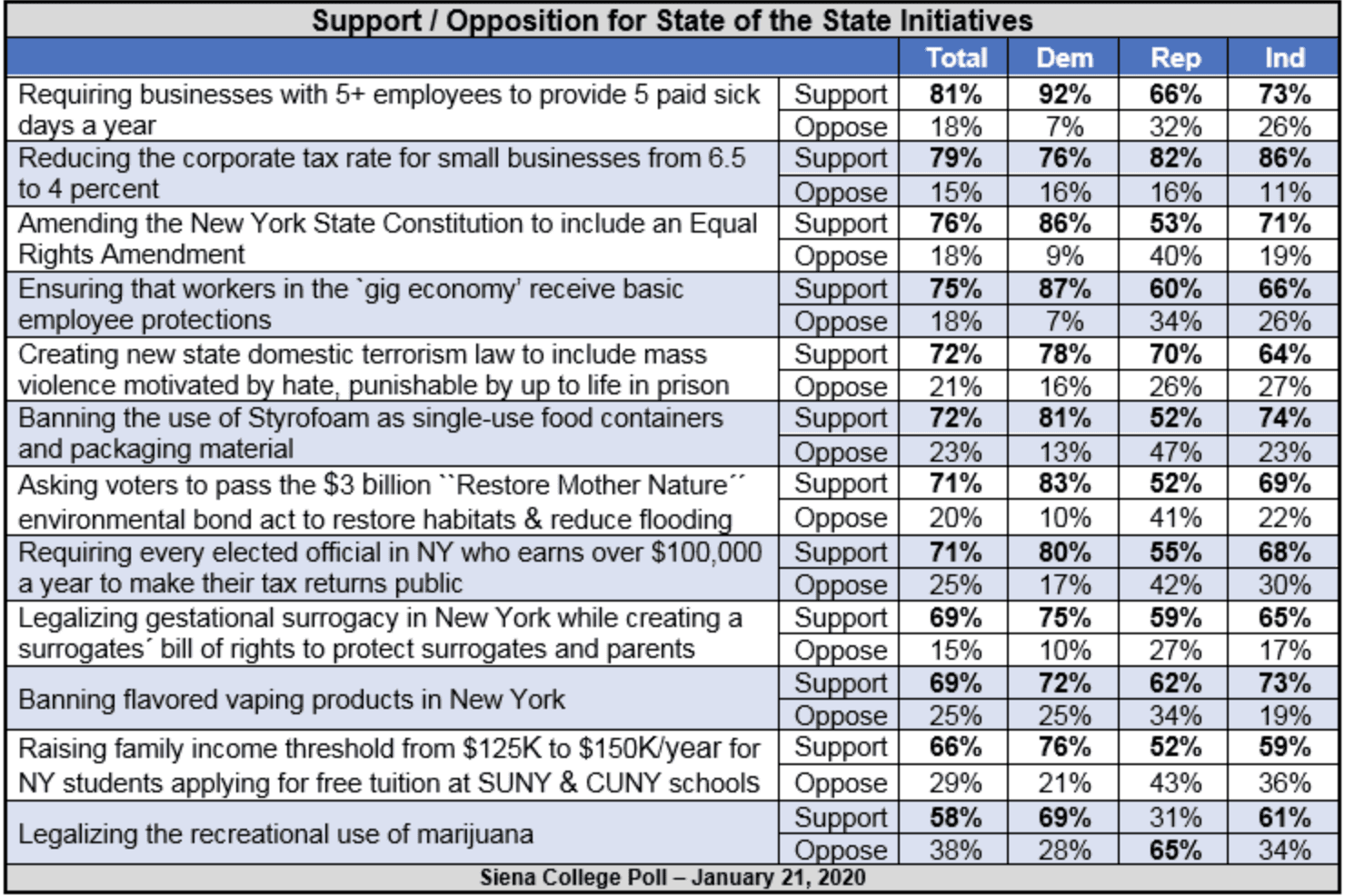 COLONIE — Gov. Andrew Cuomo got some good news from the Siena College Research Institute: at least 75 percent of New Yorkers support 11 proposals the governor introduced during his State of the State address and his favorability and job performance rating saw a significant boost.

But, by a 49-37 margin, voters say the recently enacted so called “bail reform” is bad for New York, according to an SCRI recently released. In April, 2019, shortly after the Legislature voted to remove cash bail for a whole host of crimes, the majority, 55-38, thought it would be a good thing when it went into effect on Jan. 1.

“In the last year, the governor’s favorability has been up and down – half the months a little above water and half a little below water. Right now, a plurality of voters say they view Cuomo favorably, including more than two-thirds of Democrats,” said Siena College pollster Steven Greenberg. “However, he’s viewed unfavorably by 51 percent of independents and 80 percent of Republicans.”

His overall favorability rating is 49 percent to 45 percent up from 44 to 49 in November, 2019. His job performance rating jumped from 41 percent who like the job he is doing and 56 percent who do not. That’s compared to compared to 35 to 65 in November.

In April, a small majority of upstate voters and those living in downstate suburbs thought the idea was a good one. The latest poll found the majority of both demographics, 56 and 64 percent, think it is a bad idea.

While every demographic group moved more negative since April, the largest movement from “good” to “bad” was voters 55 and older. About two-thirds of black and Latino voters had thought the law would be “good” and now that support is down to about half, according to the poll.

“Certainly, all the attention this new law has gotten across the state has had an impact with voters and it is clear that a sizeable number of New Yorkers, who were optimistic that the new bail law would be good for the state, now believe the law is bad for New York,” Greenberg said.

• Legalizing marijuana has “the largest support its ever had in a Siena College poll,” Greenberg said, with 58 percent supporting it and 38 percent against.

• By an overwhelming majority, 81-18, New Yorkers feel businesses with five or more employees should have at least five paid sick days a year.

• By a 49-41 percent margin, voters think the state is headed in the right direction, up from 45-42 percent in November.

The Siena poll was conducted from Jan. 11 through Jan. 16 by making telephone calls in English to 814 New York state registered voters. It has a margin of error of +/- 4.1 percent.