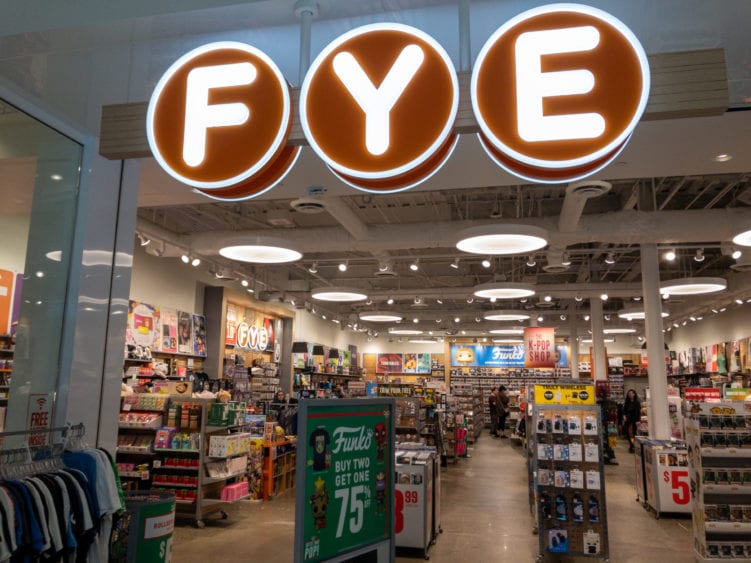 ALBANY — Trans World Entertainment Corp.is throwing in the towel on its chain of brick-and-mortar record stores.

The publicly-owned retail company informed its shareholders of its intent to sell off its FYE stores to a subsidiary of Sunrise Records and Entertainment Ltd. in Canada. The Albany-based entertainment group, which has suffered substantial losses in recent years, has agreed to sell the retail chain for $10 million in cash. Ownership of as many as 206 locations will change hands, as will the name of the chain, but “substantially all” employees are expected to retain their jobs.

The decision to sell to Sunrise was unanimously approved by Trans World’s board of directors and filed with the United States Securities and Exchange Commission on Thursday, Jan. 23. The sale will also include Trans World’s administrative headquarters and distribution center at 38 Corporate Circle in Albany. The $10 million price tag includes the transfer of $40 million worth of net inventory. The purchase price will be adjusted after an audit, which could nullify the sale altogether should net inventory be valued at less than $30 million.

“[Trans World] will continue to operate its business in the ordinary course until the transaction closes, and thereafter Sunrise anticipates keeping substantially all of the current [full-time] employees,” Trans World stated in a press release last week. Trans World continued to declare that it will maintain its retail business online through etailz, Inc.

The sale, which is targeted to close before the end of this year’s first quarter, is still subject to a two-thirds vote of approval by Trans World shareholders. The announcement comes a little more than two months after the company shared its “substantial doubt” of remaining viable for another year to those same shareholders.

Trans World reported a net loss of $39.1 million through the first three quarters of 2019. It also suffered through another $31.7 million loss the year before. By last November, the company accumulated a $89.3 million deficit. In addition, it had used as much as $53.3 million in net cash to off-set operating activities in 2018, and another $30.8 million last year.

“Based on its recurring losses from operations, expectation of continuing operating losses for the foreseeable future, and uncertainty with respect to any available future funding, as well as the completion of other strategic alternatives, [Trans World] has concluded that there is substantial doubt about the Company’s ability to continue as a going concern for a period of one year after the date of filing of this Quarterly Report,” Trans World stated in its Nov. 2 regulatory filing.

News of the agreement caused Trans World stock to soar Thursday. Price of the stock closed at $2.31 a share the day before. However, it quickly doubled to $4.77 at Thursday’s opening bell before climbing to a high of $9.72.

Last year served as a watershed moment for the struggling retail business on Wall Street as it faced delisting from Nasdaq. The price of Trans World stock fell below the required $1 a share minimum for listed companies. To be listed lends a company higher visibility to prospective investors on the New York Stock Exchange. In response, the company effected a one-for-twenty reverse stock split last August. The move combined every 20 shares of stock into one. Though it increases the bid price for each share — pushing it above the $1 threshold — the move does nothing to the value of an investor’s portfolio.

In 1972, Robert Higgins started what Billboard magazine later called “the last brick-and-mortar chain” with a single Record Town store in Glens Falls. He would guide his business through substantial growth, opening or acquiring more than 1,000 stores across the country. He stepped down, making way for current Trans World CEO Mike Feurer, in 2014 and remained as the company’s chairman and majority shareholder up until his death in 2017.

Higgins stayed on long enough to view a paradigm shift in consumer habits due in large part to the internet. Record Town, which in time acquired Wherehouse, Musicland, Disc Jockey, Camelot, Strawberries and Coconuts, would ultimately reflect an overall decline in record sales with the FYE — For Your Entertainment — moniker. The Colonie Center location was among the first of his stores to adopt the name change in 1997. Less floor space was dedicated to music as the retail chain concentrated on video, electronics, and later, tee shirts and pop culture collectibles. Over the first three quarters of 2019, Trans World reported that music accounted for just 18.4 percent of sales. Conversely, the sale of pop culture merchandise, such as tee shirts, Funko bobbleheads and other items, represented 45.2 percent of all sales. Nonetheless, overall sales were down by 16 percent towards the end of last year.

Sunrise Records has recently developed a reputation for rescuing failing record stores. According to its website, its first store was opened in Toronto in 1977 before quickly growing into one of five major record store chains. In 2017, it acquired the leases of 70 storefronts from a major competitor, HMV Canada. If its acquisition of HMV can be viewed as a harbinger for what will be seen at current FYE stores at Crossgates Mall, Via Port Rotterdam, Wilton Mall and Queensbury Plaza, there will be an increased focus on music sales.

“Of the converted stores, Sunrise planned to stock a larger and broader array of music in comparison to HMV,” states Sunrise on its website, “including larger selections of vinyl records and music by local independent artists, as well as expanded offerings of music and entertainment apparel and merchandise.”

SPOTTED: Bethlehem weathers The Storm 2-0; remains atop the CDHSHL