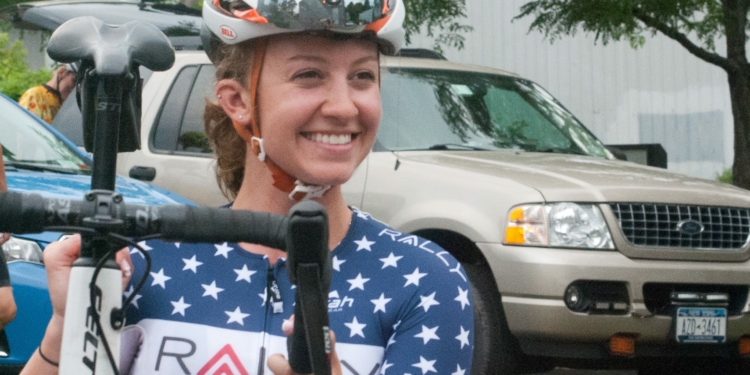 DELMAR— Emma White, the youngest ever USA Women’s Cycling Champion, met and rode with local cyclists on Thursday, July 11 at the Real McCoy Beer Company in Delmar. Members of the Mohawk-Hudson Cycling Club, Capital Bicycle Racing Club and more congregated to celebrate White’s recent victory and wish her luck in her races to come.

White had a chance to meet, reconnect, take photos and speak with the other cyclists about her success and her future endeavors. The cyclists then proceeded with their 30 mile ride, which would end back at the Beer Company for the riders to enjoy food, drinks and more mingling.

Emma White, of Duanesburg, has been racing since she was 9 or 10-years-old. She has competed in all kinds of races like cyclo-cross, where the cyclist must carry their bike through a portion or obstruction in the course, and road racing, which includes specific races like time trials or criterium races. In White’s case, she is the current professional criterium champion.

In pursuit of making the 2020 Olympics in Tokyo, White recently began track racing. She revealed, “I mean the Olympic track— it’s a dream— I knew I wasn’t gonna get there in cyclo-cross; I had 10 good years in cyclo-cross so I figured I wanted to try something new.” She also shared an anecdote of her first time on the track a year ago. “My first time on a UCI legal track was a week before the first World Cup… I remember I was in LA, training right before the World Cup and I was training with three world champions… I got on the track and the three other people were wearing world champion jerseys! I was like what the heck am I doing here!?” Despite her disbelief, she landed herself a spot on the podium in London.

As for her success, she is greatly influenced by her coach, Kristin Armstrong. “She’s just a pretty neat person… she’s a three-time

Olympic gold medalist, so she’s been my coach through it all.”

White has been busy, juggling professional cycling with traveling and college classes. She attends school at Union College, and will be finished in November. This week, she is headed to Europe to compete. “I leave this weekend for France and I’m doing the Women’s Tour de France, so I’m really excited about that. And then I’ll head to London to race and then Scotland, Colorado and then Bolivia,” said White. “It’s quite the summer!”

Even with the multitude of races ahead of her, there is still no stopping White from achieving her goal. “I think an Olympic gold medal is definitely the ultimate dream… nothing is definite, but I’m definitely chasing Tokyo.”

While nothing is for certain, it is clear that White will be one to watch as she rides into a bright future.