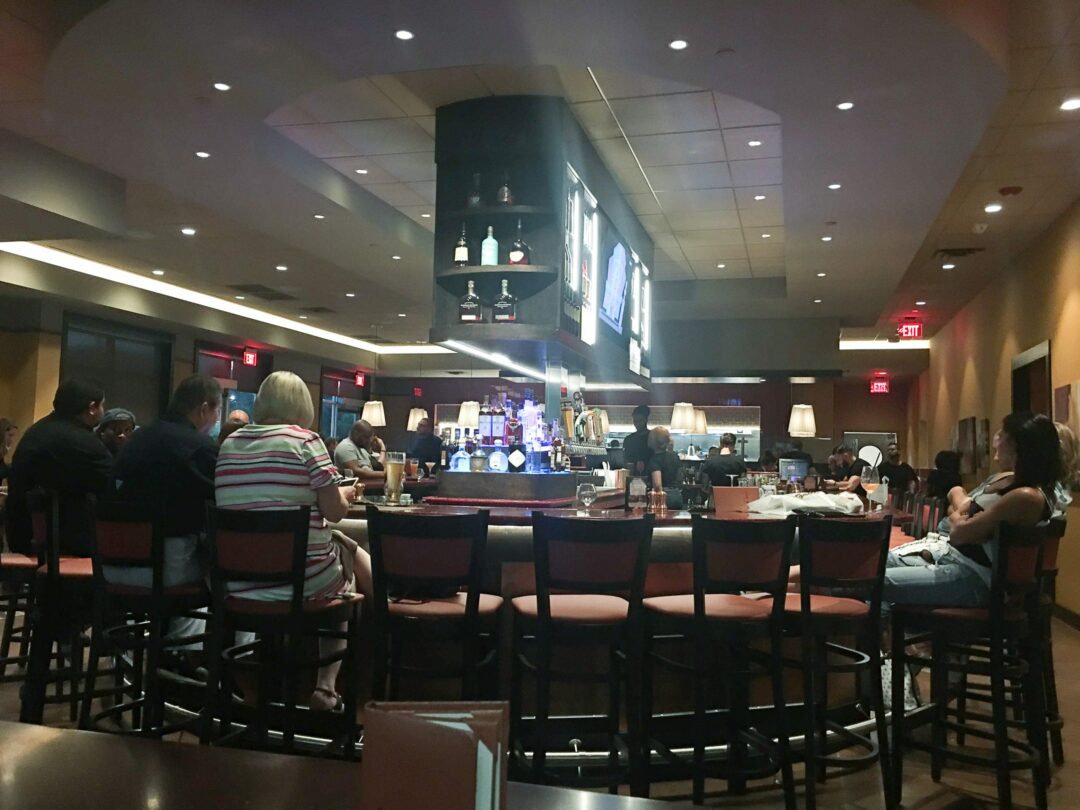 ALBANY — 110 Grill had been heavily advertised and hyped across the Capital District right up to its grand opening date on Friday, July 27. It is, after all, the first New York location for the expanding restaurant chain, which already has over a dozen locations across Massachusetts and New Hampshire.

Marketed as “modern American cuisine in a trendy casual atmosphere,” its architecture and atmosphere automatically fed into that. Located on the first floor of Crossgates Mall near Lucky Strike, more than a week has passed since its birth here, and clearly it’s been attracting quite the sheer curious crowd.

The restaurant seemed packed to capacity when we arrived, as a few hungry would-be customers had to wait at the entrance booth since there was no available seating then. Since we’d reserved a table, we, somewhat guiltily, sauntered through this little crowd and was led to a booth near the bar and kitchen.

Upon first impression, the architecture behind 110 Grill looked quite impressive. Brown was the restaurant’s main color scheme, with different shades to offer a pleasant monochromatic look overall. Warm, gentle lights dripped from the ceiling, to softly illuminate the floors.

Customers could sit at the high-seating bar (which boasts a considerable menu of drinks) by a glass window that separates them from the chefs who are literally crafting their meals before them; out on the atrium, which borders with the mall’s wide hallway, or outside on the private patio to enjoy the fire pit there.

But while it’s evident that the restaurant paid much attention to its aesthetics, perhaps it did not as much for its food quality and most of its customer service.

My friend and I soon decided that we preferred to sit out on the atrium instead, and after politely asking our waiter if we could move to another table there, he seemed to take it with a dash of bitter salt. He disappeared for a while to check for any available tables out there, and when he returned, he wordlessly beckoned us to stand up and move. My friend looked at me with a raised eyebrow, clearly noting how brusque our waiter was.

Automatically being given a new waiter (this time, a waitress) now, we finally perused the menu and initially had some difficulty deciding what to order, since the prices were quite high. While appetizers were at least $8, main dishes ranged from $13 to as high as $26, and a few other entrees soared up to $32.

The dinner menu is divided into several sections, like “By the Chef” (the general evening dishes which includes Greek salmon for $23, pulled pork mac and cheese for $16.50, and Tagliatelle Bolognese for $17.50), and “Between the Bread” (which offers burgers and sandwiches, that are accompanied by a side like French fries and seasonal vegetables).

For the healthy-focused, “From the Garden” yields six salad options, which one can further add chicken, salmon, shrimp or seared yellowfin tuna onto for an additional fee. There’s also “For the Vegetarian” which comprises of pasta primavera, vegetarian stir fry, vegetarian pesto pasta, and grilled cheese and creamy tomato soup. The fish-inclined should look into “Off the Hook” which has three options: salmon, swordfish and baked cod. Overt carnivores would enjoy “In the Cut” which with two sides, and can enjoy either steak tips, NY strip, and ribeye steaks.

Our new waitress impressively introduced the restaurant, even asking if either of us had any allergies, and she expressed how 110 Grill genuinely pays attention to individual customer’s needs. 110 Grill, in fact, prides on offering gluten-free options. While waiting patiently for us to choose from the menu, she gave us complimentary bread and butter as an intermediary appetizer. The bread was quite soft and voluminous, making it inviting for us to lightly lather it with butter, giving us a first taste test into what 110 Grill offered.

Pleased with the bread-and-butter combo, I eventually ordered the chicken pesto pasta whereas my friend wanted the fish and chips. A mere 15 minutes passed before our meals finally arrived.

Following a forkful, I sat there, surprisingly disappointed. The pasta was lukewarm at best, the chicken felt undercooked, as its supposedly-rich flavor never really engulfed my senses, and the tomatoes, unlike how it was advertised, were not roasted fully. I peered up at my friend who comically had an unimpressed look too.

“You’d think that they wouldn’t screw up something simple as fish and chips, but there’s no seasoning at all,” she said.

As we continued dining, under the hopeless notion that perhaps it would get better after a while, our meals never fully satisfied us. My meal had quickly turned cold within five minutes; on hindsight, I doubt there were even any signs of steam rising from my pasta once it had arrived. My friend did comment that her accompanying French fries were pretty good, but the fish was just not worth the $17.50 price tag. My pasta did cost a hefty $16.50.

Over time, eating felt like a chore and being unable to finish our meals (or rather, we could not stomach another bite), we asked for boxes so we could bring them home. “Maybe reheating it would bring the flavor back,” my friend darkly joked.

Overall, it may not have been the spectacular experience we’d hoped but the restaurant’s ambiance and atmosphere partially made up for it. Once the clock struck 8 p.m., the lighting out in the atrium notably went dimmer, a sign that 110 Grill truly does want to visually appease its customers.

As the night nearly concluded, our kind waitress, one of the night’s rare treasures, briefly informed us of the restaurant’s loyalty program. For every $110 one spends on food and non-alcoholic drinks, one would get a $10 reward that can be utilized on one’s next visit. Every $1 spent is one point earned. For more information, one can consult the restaurant’s website or ask their server. Furthermore, one can get a complimentary dessert on the month of their birthday and of their anniversary.

Despite the night’s disappointment, I had to admit that it was nice to learn how passionate the restaurant is in wanting to maintain a great loyal fanbase.

When our waitress later asked if we would like to check out the dessert menu, she was met with politely-shaking heads.

Legislator wants to do away with longevity for elected officials

GUILDERLAND LIBRARY: Get ready for Kindergarten