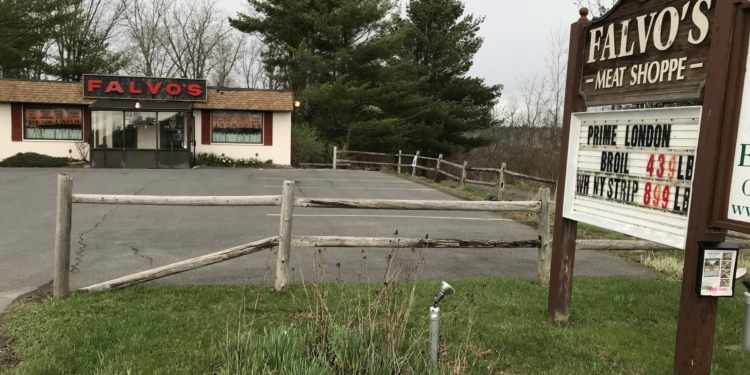 NEW SCOTLAND — Falvo’s Meat Shoppe owner Joe Robilotto is looking to retire and has placed his market up for sale.

The market on New York state Route 85A has been a staple for local consumers shopping for an assortment of meats and party platters since 1974. Over the years, residents have come to Robilotto by the hundreds to buy their Thanksgiving Day turkeys and his old-fashioned sausage dressing, based on his mother’s recipe.

“It is an old-fashioned sausage dressing just like my mom used to make,” Robilotto told The Spotlight, in a business feature published in 2013. “We use good, fresh seasonings and the meat is not loaded with fat, so it is not going to be greasy.”

The Route 85A corridor has been witness to a substantial amount of development over the past several years. Just a few miles south of Falvo’s, the Hilton Barn was moved to make way for a 28-unit residential development at the Colonie Country Club. Additional development is planned even closer to the family market.

The market itself is listed under Ed Barber, an agent with of Better Homes and Gardens Real Estate, who describes the property as a “turn-key profitable business” located within a growing number of luxury homes, and an upcoming 18,000 square-foot retail store building along Maple Road. According to the advertisement, more than 7,000 motorists drive past the store each day. The market stands on three-quarters of an acre and has a listed value of $299,000.

Before taking time for a customer, Robilotto joked about only being able to take a week’s vacation before recent news of his market being placed on the market. The butcher said he intends to keep his doors open until a sale is finalized.

“It wouldn’t be a business worth selling, otherwise,” he said.