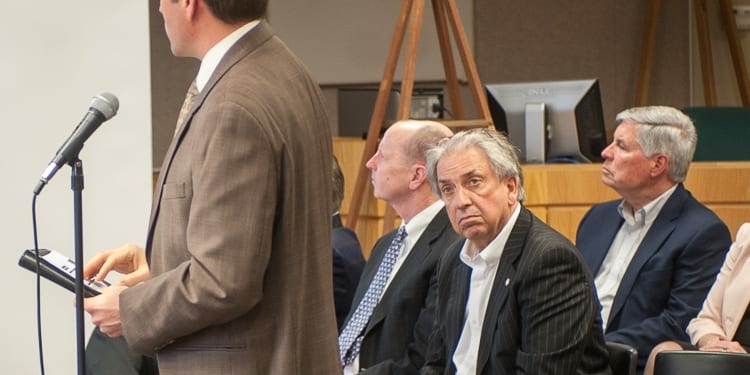 Galesi President and CEO David Buicko listens to a presentation of the economic impacts a plan to develop the old Starlite theater site would have on the community. (Jim Franco/Spotlight News)

COLONIE — Prior to granting millions of dollars in tax breaks to the developers of the former Starlite theater site, the town’s Industrial Development Agency commissioned a study to determine whether or not it’s worth it.

During a special meeting of the IDA on Monday, April. 23, Michael N’dolo, of Camoin Associates, the Saratoga-based company who did the fiscal impact analysis, broke down what the new jobs are worth on the Starlite site and at ancillary businesses and how much taxes are paid now compared to the proposed Payment In Lieu of Taxes.

The Galesi Group is asking for some $12 million in local and state benefits to build Phase I, a 150,000-square-foot new headquarters for Ayco, a financial company under the huge – and wealthy – Goldman Sachs umbrella.

A Payment in Lieu of Taxes proposal in front of the IDA now is a 10-year deal starting with a total town, county and school tax bill of $106,509 in year one that gets progressively larger until maxing out at $1 million in year 10.

“This property sitting vacant for a very long period of time and national and local developers all competed for this project,” said Galesi President and CEO David Buicko. “Every property we developed in the Capital Region and anywhere in state or out of state have utilized a variety of tax incentives and they are the only way to level playing field. But for getting the IDA benefits this project would not work. The numbers in this report add up big time as far as the economic impact to the community.”

Galesi and Ayco could have access to sales tax exemptions worth up to $2.3

The mortgage tax exemption would not have any impact on the town because it is collected by the state and county. Without a project the amount of mortgage tax would be zero.

Based on a combination of those two formulas and the exemption, the town would not receive $126,360. Without the project, the amount of sales tax generated by construction would be zero.

The town would, according to Camoin, receive a nominal amount, about $3,000, in sales tax from construction workers spending money in Albany County businesses while working on the building.

The town would, too, collect some $53,893 a year in sales tax by the money spent in Albany County by employees working in the new building, according to the study.

Ayco says the new headquarters will allow it to retain 626 employees and hire 160 new people in high-paying financial sector jobs with another 476 indirect jobs – or jobs created with the ongoing existence of Ayco at the site be it onsite or in ancillary businesses supporting workers at the site.

Total earnings will equal $72.8 million a year with total sales – the amount of product or services the company will vend – coming in at $147.7 million a year.

The new annual direct earnings associated with the project is nearly $17.7 million a year onsite plus $55.1 million from retained jobs and $27 million in indirect earnings.

“Ayco is a long time employer in the Town of Colonie and in the region and our focus is to continue that and to look at the bigger picture,” said Kathryn Matthews, executive vice president for Ayco. “We are projecting to bring 160 new jobs by 2021 and we are confident we can meet those job projections and we will report back to the IDA to say we met those job projections. But, our lease

commitment is contingent on making sure we have the financial assistance of the IDA to move the project forward.”

Only a handful of people showed up at the IDA meeting to hear the presentation and fewer than that spoke.

“The one thing I heard the loudest was 900 parking spots – I sell cars,” said Alan Goldstein who represents the Goldstein Auto Group. “Based on this presentation on the economic impact, it really is a ‘no-brainer.’ It is just going to make so

much activity and I think the presentation of the economic numbers is conservative.”

While traffic and wetlands were brought up, and are very much issues related to the project, the IDA is more geared towards the financial end of things. Site work and impacts on traffic is up to the Planning Board.

Susan Weber, of SAVE Colonie a Partnership for Planning, spoke to granting any benefits to a company the size of Goldman Sachs.

“Far from leveling the playing field this would put the thumb of the town on the side of this developer and benefit the developer in contradiction to other projects that would be coming and also projects here already. There is a fair amount of vacant office property in Colonie and this would add to that issue,” she said. “Goldman Sachs is a multinational investment bank and financial services company. It is a major player in the world economy.”

FILM REVIEW: ‘Chappaquiddick’ delves into one of the murkiest Kennedy scandals in history