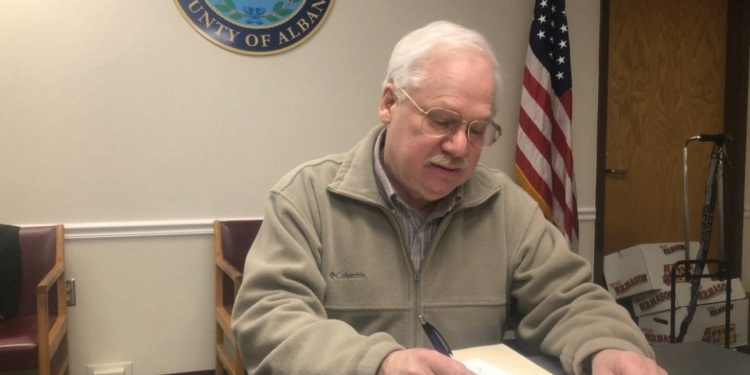 ALBANY COUNTY—After just three months in the office, Albany County Legislative Majority Leader Gary Domalewicz abruptly resigned his leadership position during a closed majority caucus meeting on Thursday, April 5. The resignation came after rumors began swirling that he had lost his party’s support and would be replaced by Legislator Dennis Feeney, a little-known second-term Democrat from Guilderland.

Domalewicz not only replaced longtime Majority Leader Frank Commisso, Sr., who held the seat for 25 years, but also represented an ideological shift within the legislature when he and Chairman Andrew Joyce managed to secure the votes necessary to unseat Commisso and his favored candidate for chair, incumbent Sean Ward.

“I am humbled by the incredible support I have received from my colleagues,” Domalewicz said at the time. “It is time for our body to move in a new direction. My colleagues have embraced this opportunity and I am looking forward to serving every member of the majority.”

According to several legislators familiar with events of the past three months, it was Domalewicz’ failure to do exactly that that led to his April ouster. By most accounts, his party’s support had all but entirely eroded and, by late March, plans were already underway to replace him.

“He has a shoddy interpretation of the charter,” said Joyce, claiming that Domalewicz “refused” to follow through on an agreement to reorganize the administrative structure of the Office of the Chair and the Office of the Majority.  “He just flat out said, ‘the staff stays,’ with zero discussion or consideration for what their duties are overall.”

The stated intent behind the reorganization was to relocate certain powers in the office of the Chairman (where those powers generally reside in similar legislative bodies) to ensure all elected representatives have fair access to the legislative process. For example, legislation written by the minority party has been sent to the Office of the Majority for approval before being added to the monthly agenda, which has come out of the majority’s office. Ending that practice was reportedly meant to assure minority members that their voices would carry greater weight, the same reason that Joyce appointed minority party members to committee leadership positions for the first time in the Legislature’s history.

After reportedly agreeing, in a series of phone conversations with several legislators—including Joyce, Joe O’Brien, Alison McLean Lane and Charles Dawson—that he would be supportive of the reorganization, Domalewicz appeared to have gone back on his word. Some legislators, speaking off the record, speculated that his reluctance to enact certain changes was the result of pressure from Albany County Executive Dan McCoy, who employs relatives of Domalewicz.

One hypothesis is that McCoy may be unhappy with the way Joyce is running the Legislature, primarily due to a desire to have Chief of Staff Tim Maniccia independently review the executive’s proposed annual budgets and proposed anti-nepotism legislation that would limit a practice oft associated with McCoy’s administration.

“Dan McCoy is a very good friend of mine,” said Domalewicz, denying that McCoy was behind his unwillingness to move ahead with administrative changes. “I don’t know who told you that I agreed to anything,” he said. “I was told that it was in the charter and had to be done. When my counsel advised me that it wasn’t in the charter and, in fact, the charter said these things had to be done in the majority’s office, I said, ‘Let’s have the caucus decide what we’re going to do with this.’ And Andrew [Joyce] got very excited and never allowed us to get to that point.”

Domalewicz said that, looking for clarification, he asked Joyce for a meeting but was refused.

Domalewicz also said he had already planned on resigning, claiming that the division within his party had proven more than he was able to deal with at this time.

“He has been largely ineffective in dealing with his caucus and working with them, and me, in a positive, productive and collaborative manner,” Joyce said of Domalewicz. “His near total lack of support in the caucus is a testament to that.”

But not everyone was happy with the most recent shake-up, including Legislator Sam Fein, who said he had no complaints about Domalewicz. Fein unsuccessfully nominated Deputy Majority Leader McLean Lane for the position of majority leader during Thursday night’s caucus.

“I just didn’t like the way this was done,” Fein said, noting that Legislator Joanne Cunningham, Domalewicz’ other deputy, was out of the country and said that neither she nor McLean Lane were aware of the plan to remove the majority leader. “If there were disagreements between the chair and the majority leader, I would have liked for us to have discussed those openly at caucus and seen if we could come to any agreements.

“I think Dennis [Feeney] is a great guy,” he continued. “And I’m looking forward to working with him as majority leader. I just don’t like the way things went forward. I don’t think it needed to be solved in this way.”

“I think members have been disillusioned by the current governing style under Gary [Domalewicz],” said Legislator Joe O’Brien. “I think Dennis will strike the right balance with the very diverse caucus: minority members, city, town, suburbs.” O’Brien characterized Feeney as “a bright lawyer” and “a gentleman,” and said he believes it will be good to have leadership representing part of the county that is outside of the City of Albany.

“I appreciate the support of the Democratic Legislators who selected me to lead our Caucus, and I look forward to working with our politically diverse members and our staff to advance an agenda that reflects our party’s values,” said Feeney in a statement.

While Joyce said it was his hope that Feeney would keep Cunningham and McLean Lane on as deputies, McLean Lane said that she turned down the offer and Feeney stated that he will be appointing new deputies in the near future.

“Sometimes, leadership votes focus on disagreements or divisions,” said Feeney. “But it’s clear after our Caucus that Democratic members are ready to put differences aside and to work together respectfully, especially when we have different opinions. I thank Gary Domalewicz for being gracious and look forward to continuing to serve with him.”

“I wish him all the luck,” said Domalewicz. “He’s going to need it.”