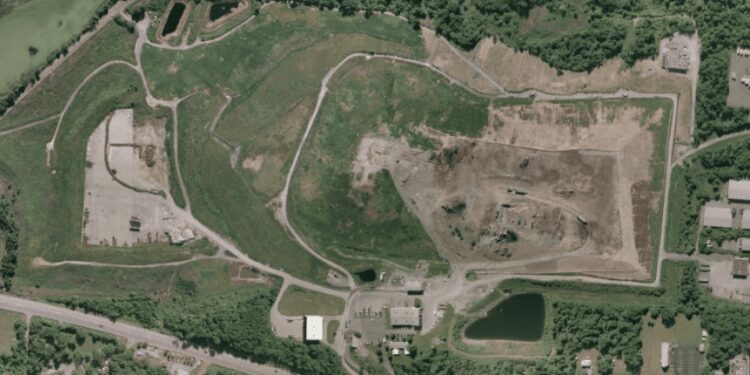 An aerial photo of the Colonie Landfill. (photo provided)

COLONIE – The state Department of Environmental Conservation officially granted the town permission to expand the landfill between Route 9 and the Mohawk River.

The decision comes 15 days after the DEC accepted the town’s Final Environmental Impact Statement, which is a smaller expansion than the town originally proposed.

The new footprint, known as Area 7, will now be 500 feet from the river, 400 feet further than originally proposed. And the FEIS requires the height of the new cell to be 467 feet above sea level, 50 feet lower than the original proposal.

Also, the DEC is requiring an independent, third party onsite full-time to oversee all landfill operations. Waste Connections, the company the town contracts with to operate the landfill, will pick up that person’s salary.

The town was looking to expand the landfill – which would have been to capacity by the end of this year – by 105 acres. The smaller proposal is about 93 acres. What that means to the life of the landfill will not be exactly clear until a final design is developed based on the new parameters.

Contracting the landfill’s operation to a private company was one of the more controversial moves of Supervisor Paula Mahan’s tenure. It gave the town an immediate $23 million payment and another $2.3 million over the first five years with $1.1 million annually for the remaining 20 years of the contract.

Critics in Colonie say the deal shortchanged the town. Critics outside Colonie – namely in the towns of Halfmoon and Waterford – oppose the expansion because of odor issues and, they claim, it will further pollute the Mohawk River.

More information online later today and in our print edition.