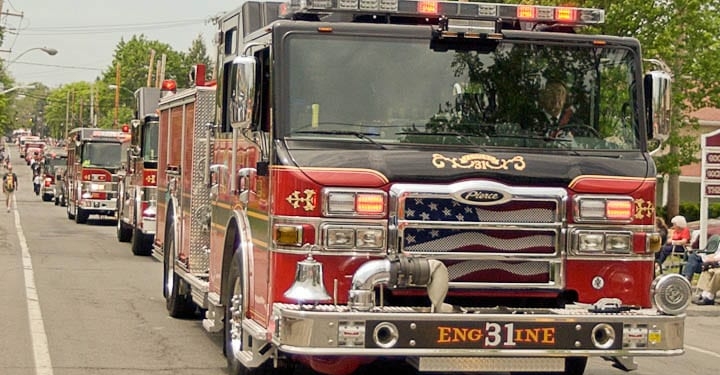 BETHLEHEM — Elections in the five Bethlehem fire districts are taking place on Tuesday, Dec. 12.  Each year, one of the five commissioners in each district is up for re-election to a five-year term, except in cases where a seat is prematurely vacated, requiring appointment and/or a special election. This year, Elsmere residents will also be faced with a bond proposition to build a $1.4 million substation at Feura Bush and Wemple roads.

If you don’t know, see the map at the bottom of the story to determine your district.

Voting will take place at the North Bethlehem Fire Station at 589 Russell Road in Albany.

In Slingerlands, there will also be two elections, as a seat was vacated with the death of Commissioner John Flanagan in August. Commissioner James Kerr, who was appointed to replace Flanagan, will be running for a five-year term, ending on Dec. 31, 2022. Department Treasurer Barry Moss will be running for a four-year term, ending on Dec. 31, 2021.

Voting will take place at the firehouse at 1520 New Scotland Road from 6 to 9 p.m.

In the Selkirk Fire District, which covers more than 50 percent of the town, Fire Commissioner Robert Burn is running unopposed to retain his seat.

While the district is considering construction of new infrastructure to accommodate new, larger apparatus, Commissioner Charles Wickham said a bond resolution for that project is unlikely to be put before district residents until the spring. “We won’t be bringing it to the public until we have all our facts and figures put together,” he said. “Probably April or so.”

Voting will take place at all three Selkirk fire stations from 6 to 9 p.m.

In the Elsmere Fire District, Commissioner Richard Webster is running unopposed to retain his seat. Residents in Elsmere, however, will have an opportunity to vote on a bond proposition to build a new station to service the southern region of the district.

Proponents of the proposition, such as Commissioner Chairman John Brennan, point to the amount of residential and commercial development in the southern part of the district — between Haswell Farms and Route 9W — and claim that growth has necessitated the proposed $1.4 million station that would be built at the corner of Feura Bush and Wemple roads, on 1.4 acres that has been owned by the district since 1982.

The new station, which Brennan said “would be no monstrosity,” would be about 4,608 square feet and would have two truck bays, although there is only one available currently for the space. A second truck, said Brennan, may be acquired in the future, as deemed necessary by continued growth.

A report published by the district earlier this year identified that area as needing an improvement in “quality level and response time service,” and, according to Brennan, that need will only be exacerbated as development continues .

Opponents of the new building point to an earlier report, which was commissioned in 2011 by all five Bethlehem fire districts, which some have interpreted as recommending greater consolidation between departments.

According to Elsmere Fire District resident Richard Root, there should be no need for a new sub-station when Delmar and Selkirk both have fire stations nearby. He said that he would like to see district lines redrawn, so that responding stations are not farther away from potential calls than stations from other districts. Most of the districts, he explained, were established in the early 1900s and have never been redrawn to reflect growth in town.

“If you’re looking to have, potentially, three fire houses within three miles of each other, there’s a problem,” he said. “There’s an issue that’s not being addressed.”

Brennan explained that there is more organizational consolidation between districts as a result of the 2011 report, and Root acknowledged that a “mutual aid” agreement between the districts often brings more than one responding district to significant fires in their area.

According to Brennan, similar growth in neighboring fire districts has made counting on the Delmar and Selkirk districts to pick up any slack simply untenable and, he added, “That’s not the charge we have from the residents and taxpayers, to let someone else do it.”

Brennan also said the proposal would not raise taxes in the district, where a typical homeowner with a $200,000 home currently pays $188 for fire services. Voters are being asked to approve a $1.3 million bond, the principal and interest of which would be paid with money that has already been set aside by the district. “We have enough in our budget to accommodate that during this period,” he said.

Root, who received notice of the bond proposal on Friday, Dec. 1, argued that district voters were not given enough time to review the proposal adequately. An informational meeting on the proposed sub-station has been scheduled for tonight, Wednesday, Dec. 6, at 6 p.m. at the firehouse at 15 West Poplar Drive in Delmar.

Voting will take place at the Elsmere Fire House at 15 West Poplar Drive in Delmar from 6 to 9 p.m.