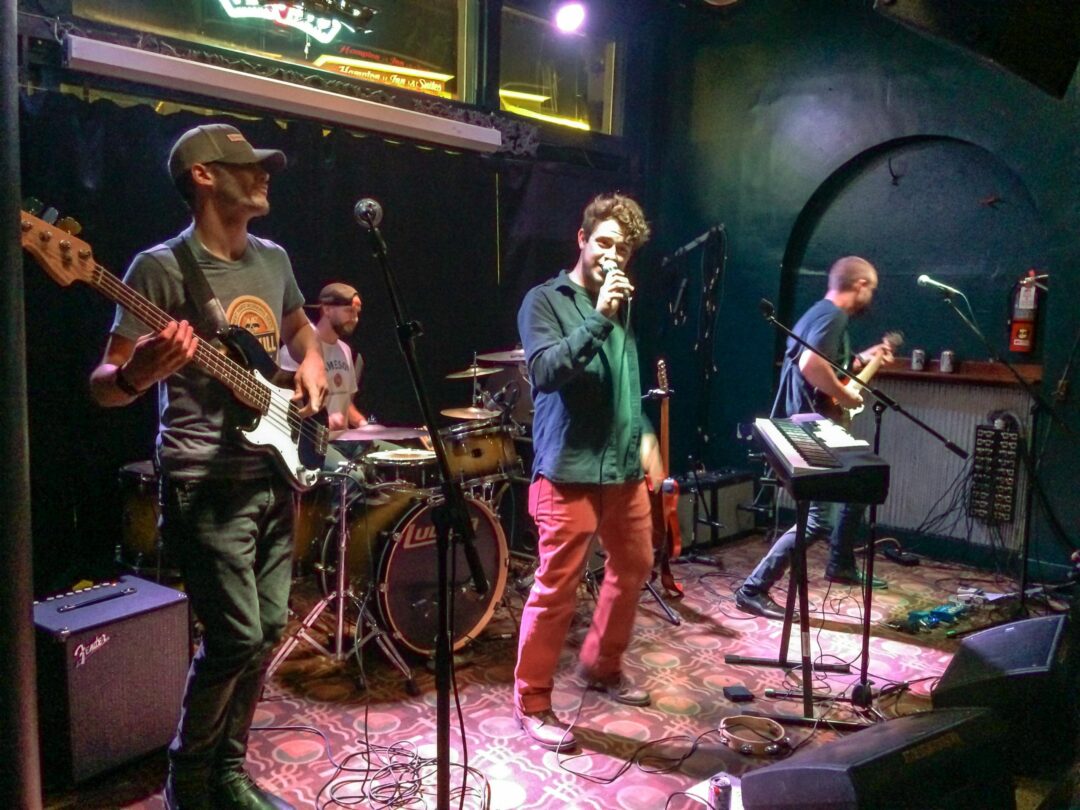 The Late Shift was one of four bands to play Jupiter Hall on what was the final round of Wednesday night shows 102.7 WEQX organized for a weekly Battle of the Bands. The vertical string of mid-week nights strung across the month of August to determine who would open its annual Pearlpalooza music festival in Albany that summer.

It wasn’t just a “battle” amongst musicians fighting for recognition: each band was tasked with the near impossible task of coaxing its fans to come out for support. Thursday mornings are not the time to be nursing a hangover, either from alcohol consumption, sleep deprivation or both. It’s the type of dedication to their bands that fans pay forward with sloppy TPS reports and copious amounts of coffee.

There is, of course, an exception to every rule of thought.

The Late Shift consists of four guys who graduated from Shaker a few years back. They messed around with some instruments in high school and about five years ago, band frontman Scotty Somerville said they flipped the switch to become the group they are today. That band has cultivated a following that now allows them to host an annual Halloween party on the Captain J.P. Morgan Cruise and a regular “Thanksgiving Eve” gig at The Hollow Bar and Kitchen.

When Scotty, Mike Davies, Jake Lester, and Sean Murphy took to the Jupiter Hall stage, a relative swell of people crossed the floor towards the stage — relative in terms that a bulge of bodies from the approximately 80 in attendance started dancing. In a competition where the crowd was asked to submit hand written ballots to decide the winner, the proverbial hat had been tipped. Chanting and singing along to the songs, the favorite seemed to have already been named with still two bands yet to perform. But, it wasn’t so.

Ultimately, Hasty Page won over the crowd as the final act of the evening. The three-piece band out of Albany (has since been playing with a fourth band member) earned the spoils of kicking off the Capital City’s biggest block party of the year. But, it turns out that oft-quoted line by Ricky Bobby “If you ain’t first, you’re last,” isn’t true.

“Sometimes it’s a humbling experience to go into something very confidently and not necessarily have the results you want,” said Somerville, who added he and his bandmates didn’t walk into the room with the expectation of winning. He acknowledged that the pool of bands they were up against, like Hasty Page, were already “more up-and-coming than us.” [But,] we actually wound up getting a lot of great exposure from it. It really started our relationship with a lot of people.”

Along with the exposure to additional fans and WEQX, Somerville said Greg Bell of Guthrie Bell Productions was in attendance, too. Bell is responsible for bringing in many of the regional acts who perform at the Palace Theatre, Cohoes Music Hall and The Hollow. Somerville said the performances at the Battle of the Bands impressed Bell enough to have The Late Shift open for Jimkata’s farewell performance at The Hollow in October.

Jimkata is one of those regional bands with the reputation of working hard, performing more than 150 shows a year. After several years together, the band’s last album “In Motion” dropped last year, Jimkata decided to call it quits. The

opportunity to play with them, Somerville said, was inspiring.

“It’s funny whenever you get an opportunity to play with a band having a lot of success, whether that success is coming to an end or it’s just starting,” he said. “Just speaking with them, we’ve done a lot of things similar as bands, we know a lot of similar people. It’s amazing to find people who are having a lot of success and see that they do a lot of the things you are, it’s definitely inspiring.”

Flash forward to the day before Thanksgiving. Another Wednesday night gig. Another surprisingly large crowd. The Late Shift is headlining its “Thanksgiving Eve” party, a show they’ve put together now for four years at arguably one of the hottest joints in a hot local music scene. “There are more and more incredible acts popping up everywhere,” said Somerville. “It seems like on any Saturday, you’ll see several great shows that you actually have to pick and choose between what you can actually go see. To me, although it fluctuates… I see the scene as hot as it’s ever been right now.” And, on an evening before fans go to see family for the holidays, a vibrant crowd packed the Hollow to see The Late Shift, along with local hip-hop artists Wavy Cunningham and DJ Mercy, and The Other Brothers, a funk rock band out of New Paltz. No TPS reports or college papers due the following day so the crowd let loose. Late into the night, The Late Shift lead the crowd into a sing-along to Aerosmith’s “I Don’t Want to Miss a Thing.” It’s an obvious favorite, but it lends something of an anthem. A mid-week crowd wishing it can “stay lost in this moment,” dedicating themselves to both a band and music scene on the rise.

Plans are already in motion for 2018. Somerville said the band has two more gigs planned this month, including a New Year’s Eve show that’s still being worked out. The band already has the bridge work laid out to follow-up last year’s “Fork & Knives.”

“We can’t put a date on it, but there’s definitely some stuff going on behind the scenes,” said Somerville. “There’s some new songs, and some new approaches for some of the songs, too. Some new styles. All within our wheelhouse, but kind of exploring a few different things. There’s some stuff we’re really excited about.”

LETTER to the EDITOR: Scouts say,‘thank you’