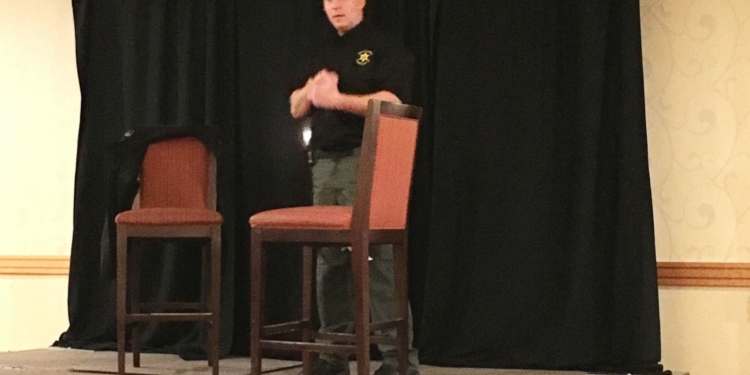 COLONIE — Partly in response to the recent shooting at Crossgates Mall, the Better Business Bureau of New York, in conjunction with the Albany County Sheriff’s office and a handful of local chambers of commerce, held a seminar focused on active shooters in the workplace and what steps civilians can take to be better prepared in dangerous situations.

Speaking to the audience during the early morning on Tuesday, Dec. 6, Albany County Sheriff Craig Apple detailed how his office, when teaching civilians about protocol for active shooting situations, is keying off of the Office of Homeland Security’s generic, “Run, Hide, Fight,” procedures. While Apple said that the situation at Crossgates was not ultimately an active shooter situation, the fact that it happened at home made his department realize that they need to step up their game in preparing people for future situations.

“We really want you to know what to do, and everybody needs to know what to do,” Apple said. He pointed out that it’s particularly important to be aware of safety procedures during busy holiday shopping times, and called the current time right now a personal nightmare of his.

“Every procrastinating husband out there, like myself, has been waiting to shop and we all run to one of the local malls, and one of these cowards comes in. What do we do? We’ve got thousands and thousands of people in there shopping,” Apple said of the situation last month at Crossgates.

The hosts spoke at length about how, during stressful situations, the human brain moves from being rational to a more lizard-like state, meaning that in times of danger, the brain reverts from a thinking tool to something more reactionary, causing people to do things such as hide under desks or lay on the floor and play dead.

“That is not a plan, folks,” Messen said. “The effects of life threatening stress on your body systems severely limits your abilities both to perceive information and make the appropriate responses.”

There are three phases of dealing with an active shooter situation, according to the hosts. While going through those phases, which are denial, deliberation, and the decisive moment, it is pivotal that civilians come up with a plan that will ensure their survival. One of the most important aspects of the training, said Messen, is drilling these steps into someone’s brain in order to force analyzing and planning to become the lizard brain instincts in stressful situations, as opposed to freezing up and hiding. Most importantly, Messen and Lombardi said, is to save yourself first, and to not waste time with someone who has already frozen up.

“You can’t sit there and try and negotiate with that person for them to come with you. They’re not going. You have to leave that person behind,” Messen said.

“If you save your own life, you’ll be able to save others,” Lombardi said.

They also noted that in situations of stress, contrary to popular belief, people don’t run screaming right away, opting instead to wait for “social proof” that something is going on. This coincides with the denial phase of shooter situations, or even other emergencies such as fire drills, during which people typically won’t acknowledge the danger and will move slowly.

“You’re looking for the people next to you to see what they’re doing,” Messen said.

The period of deliberation is quick, sometimes only minutes, and in that time, said the hosts, people must develop a plan for survival. To do this effectively, said Lombardi, people should always be aware of where the entrances and exits of a facility are, besides the main entrance and main exit. They also need to be able to note places that will provide them not only with cover, but protection from gunfire or any other type of weapon. If running and hiding are not options, the deputies said that civilians must be prepared to act quickly and aggressively with violence towards to assailant because if they don’t, they could be risking their own lives and the lives of others.

Messen also explained that in other active shooter situations, such as the 2007 Virgina Tech shooting, since running and hiding were not options, if students and teachers had collaborated to form a plan that would have stopped the attacker, fewer lives might have been lost. Messen said that even though it is likely that someone would have been shot in that scenario, multiple people rushing the shooter probably would have stopped him.

According to Messen, the New York State Department of Education recently released protocol standards on schools are to respond during active shooter situations, but some places have been hesitant to embrace the “Run, Hide, Fight,” ideas. But, Messen said, they have been invited to some schools to train teachers, and that it’s crucial to show teachers and administrators that looking for any possible escape route is better than locking kids down in a classroom.

“The purpose of this training is to make the public aware and safer,” Messen said.

Brooks back from retirement