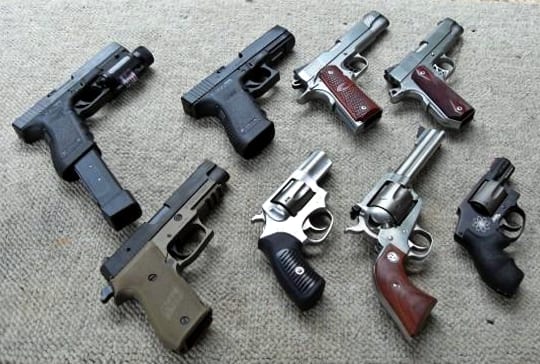 CAPITAL DISTRICT – Attorney General Eric Schneiderman has released a prototypical analysis of tens of thousands of “crime guns” that have been recovered by law enforcement, an interactive website illustrating gun trafficking trends in New York state.

Results of the analysis showed that 74 percent of all guns connected to a crime and recovered by law enforcement originated out-of-state. Moreover, 86 percent of the 39,491 recovered handguns – which the AG identified as “the weapon of choice for violent criminals,” – came from out-of-state.

The report released on Tuesday, Oct. 25, “Target on Trafficking: Analysis of New York Crime Guns,” and the new interactive tool examine the purchase history of the nearly 53,000 crime guns recovered by law enforcement between 2010 and 2015.

“The data makes one thing abundantly clear,” said Schneiderman. “New York’s strong gun laws are being undermined at every turn by lax laws in other states. Even as we work to make our streets safer, the illegal guns most often used in violent crimes continue to pour into our state.”

Schneiderman’s office is the first statewide law enforcement agency to obtain and analyze the crime gun data provided by the federal Bureau of Alcohol, Tobacco, Firearms, and Explosives. The analysis shows trends in gun recoveries and how out-of-state guns are coming into New York from what the AG’s office called the “Iron Pipeline,” states with lax guns laws along the I-95 corridor, namely Pennsylvania, Virginia, North Carolina, South Carolina, Georgia, and Florida. These findings could offer significant policy implications and context for state and national leaders striving to reduce gun trafficking and violence.

“Attorney General Schneiderman’s new report makes it clear that we urgently need to make gun trafficking a federal crime,” said U.S. Sen. Kirsten Gillibrand (D-NY). “Gun trafficking is recognized all around, by both parties, as a major source of fuel for American gun violence, yet there is still no federal law that prevents someone from crossing state lines with a truckload of guns and selling them to criminals in a parking lot.”

Schneiderman also announced the release of the Tracing Analytics Platform, a publicly available online tool that allows the public to access the data themselves, analyzing gun trends by region, year, gun type, time-to-crime, and other factors. The tool’s interactive features also enable New York law enforcement, lawmakers, and residents to explore the gun trafficking patterns occurring in their individual communities.

“This report provides an unprecedented look at the flow of illegal guns into New York and offers a stark illustration of the challenge faced by states like New York whose strong gun laws are undermined by a lax approach to this issue taken by other states,” said Chelsea Parsons, Vice President of Guns & Crime Policy at the Center for American Progress.

The report also provides key policy recommendations to deal with the trafficking challenges faced by New York state, including:

-Federally required universal background checks and closure of the “gun show loophole.” -Making trafficking a federal crime, as there is currently no comprehensive law that criminalizes each stage of illegal gun trafficking.

-State-mandated licenses to own handguns.

-Passage of the Gun Kingpin Bill in New York state to punish traffickers by up to 25 years to life in prison.

“This important new report gives our lawmakers even more evidence that, when enacted, smart, responsible gun laws work: they reduce crime and protect communities,” said Navy combat veteran and retired NASA astronaut Capt. Mark Kelly, whose wife, U.S. Rep. Gabrielle Giffords, survived an assassination attempt in 2011, when she was shot in the head during a publicity event near Tucson. “This report also shows the need for our lawmakers in Washington to do more to combat the illegal gun trade, and the consequences of making it easy for criminals to traffic firearms from a state with weak gun laws into one with stronger laws.”

Here in the Capital District

Recovered 862 crime guns over the five-year period — 47 per 100,000 people. Almost 50 percent of those were pistols and 25 percent were revolvers. Thirty-one percent of those with a known source came from within New York. Massachusetts, Florida, Georgia, Virginia, North Carolina, Vermont and Connecticut were the leading out-of-state sources, each providing 5 to 7 percent of recovered guns. The majority of guns were recovered in the northeastern part of the county and more than 25 percent were recovered in just one area code—12206.

Recovered 292 crime guns, or 31 per 100,000 people. Thirty-eight percent were pistols, 28 percent were revolvers and 22 percent were rifles. More guns were recovered in the eastern part of the county, with the most, 81, in area code 12307. Twenty-six percent of those originated in New York, while the leading out-of-state sources remain essentially the same as Rensselaer. One recovered gun came from Guam.

Recovered 170 guns, or about 13 per 100,000 people. Rifles are the criminal gun of choice in Saratoga, comprising 36 percent of all recovered guns, followed by pistols (24 percent), revolvers (19 percent) and shotguns (18 percent). Forty-three percent of guns recovered came from New York state, while the majority of out-of-state guns came from Connecticut and Florida, as well as, to a lesser degree, Maryland, Illinois and Vermont.