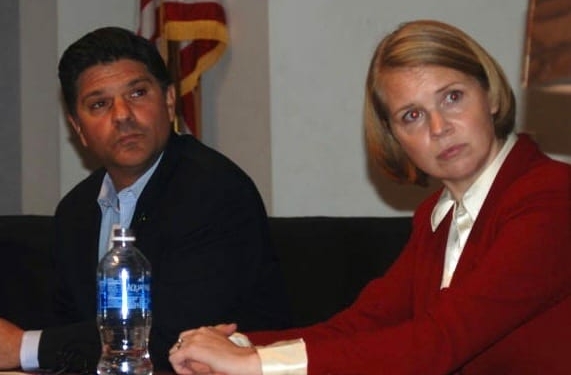 The candidates for New York’s 46th district Senate (SD-46) seat faced off on Tuesday, Oct. 25 during the only one-on-one debate in a campaign that has the potential to help shift control of the Republican-led chamber. In front of a packed room of more than 200 people at the Guilderland Public Library, incumbent Republican George Amedore, of Rotterdam, and challenger Democrat Sara Niccoli, the supervisor of Palatine in Montgomery County, discussed their views on women’s rights, education, the environment, ethics in government and more.

Amedore is also running on the Conservative, Green, Reform and Independence Party lines while Niccoli has the endorsement of the Women’s Equality party and Working Families Party.

The 46th Senate District includes all or parts of Albany, Schenectady, Montgomery, Greene and Ulster counties. A state senator makes a base salary of $79,500 and serves a two-year term.

Niccoli said her daughter’s rural school district has been “gutted,” and that is one of the reasons she chose to run for the seat. She said the state owes $3.9 billion to its public schools and she will fight to get the $60 million that is owed to schools in the 46th District. She added she feels the state provides funding to school districts inequitably, that property taxes should not provide the bulk of education revenues and that she is opposed to charter schools.

“As New Yorkers,” said Amedore, “we have the highest cost of education per pupil.” He agreed that property owners should not foot the bill for public education and that funding should be more equitable statewide. He also took credit for helping to restore $1.87 million in Gap Elimination Adjustment funds, which he blamed a Democrat-controlled Legislature for taking in the first place.

Part of the problem, she said, is legislators who serve “two masters: one is the very wealthy and one is their own pocket.”

“Yes, we need to fund education,” said Amedore. Higher education institutions, he said, should have clear and affordable pathways to graduation. “We have too many students wandering around our universities today not knowing what their major should be, loading themselves up with more debt. And when they graduate from school, they wonder where the job is and it’s not there.” He recommended public-private partnerships and the creation of “workforce development training centers.”

“Repeal it,” said Amedore of the SAFE (Secure Ammunition and Firearms Enforcement) Act, pointing to an analysis that was released the same day by the state Attorney General, which indicates nearly 75 percent of guns used in crimes in New York come from out of state. “We don’t have a gun problem,” he said. “We have a Godless problem.”

Niccoli, a farmer who pointed out that her job requires the use of firearms to defend her land and animals, said she supports the Second Amendment and called the SAFE Act “flawed.” She added she has issues with the way it was passed, “without due process or public input.” Even so, she said, the law has provisions she supports, such as tougher penalties for those who use a firearm against an on-duty officer and background checks.

On the heroin epidemic

Niccoli tied both epidemics to times of economic distress and said working to bolster the economy and give people more hope for the future could go a long way to stemming the wave of death. She also said that there should be more investment in treatment and prevention services.

Amedore pointed out that he co-chaired the Senate Committee on Alcoholism and Substance Abuse and reiterated the state’s four-fold approach: prevention, treatment, recovery and enforcement. “We’re going to beat this,” he said.

Niccoli linked failing infrastructure to the property tax cap and unfunded mandates, saying municipalities across the state are struggling to pay for needed upgrades and repairs.

Amedore pointed out that he co-sponsored the bill requiring lead testing in public schools, saying it’s a

state-funded mandate, and mentioned other clean water initiatives — possibly referring to millions of dollars awarded by the state for water infrastructure projects.

Niccoli’s campaign pointed out after the debate that, under the lead testing bill, schools would be eligible for reimbursement through their local Board of Educational Services (BOCES) after covering the initial cost out of pocket – a process they described as unwieldy and unreliable.

“I voted for it,” said Amedore, “I believe a parent should have a choice in where they send their child to school.” Parents who choose to send their children to private schools, he said, are now paying for 100 percent of that education on top of the property taxes going to public schools. “That little extra tax credit will help them afford the education of their choice for their child.”

“I’m absolutely opposed,” said Niccoli, characterizing the proposed legislation (which has passed the Senate but not the Assembly) as a move toward the ultimate privatization of education. She questioned Amedore’s support of legislation that would disproportionately benefit wealthier residents in other, primarily downstate, districts. “The reason that Albany is not paying for these unfunded mandates,” she said, “ is because they’re doing other things like giving tax breaks for yachts.

“Let’s tax where the wealth is,” she concluded to applause, “and fully fund our public schools.”

“I’m pro-life,” said Amedore, going on to say that he would abide by the decision of the U.S. Supreme Court allowing women the right to choose. He touted passage of the Women’s Equality Agenda as proof of his record on women’s rights. “I would like to see all the women in my life receive good healthcare,” he added.

“I believe in the dignity of women,” said Niccoli. “Every woman should have the right to make decisions about her body.” Niccoli criticized the Women’s Equality Agenda as “scaled-down” and inadequate, and said Amedore blocked reproductive rights and contraception coverage provisions. It is unfair, she said, to have insurance cover Viagra but not birth control.

On the Child Victim’s Act

Amedore agreed that victims of childhood abuse should be brought to justice, but said that there should be a statute of limitations.

Blaming Amedore and his Republican colleagues for working to block passage of the legislation in 2016, Niccoli said that it can take time for a victim to feel comfortable coming forward about abuse they may have endured as a child. “Right now the limitation is only six years” she said, asking residents to imagine how it must feel to come forward with something like that as a teenager or young adult. “I think we ought to lift that and let them have their day in court.”

Amedore took the opportunity during the subsequent question to rebut Niccoli, saying heatedly, “I didn’t block any bill. We didn’t even vote on a bill.” There are currently several bills under negotiation, he said.

“There’s no question that we’ve had strange weather patterns,” said Amedore, noting some of the increasingly severe meteorological events around the globe. “Is it man-made?” he asked. “Or is it another cycle of life that’s coming around that we haven’t experienced yet? We don’t know.” Regardless, he called humans “God’s stewards” and advocated a “balanced approach” to keeping the environment pollution-free, as well as increasing use of sustainable energy sources such as solar.

“I think it’s incredibly dangerous to have a New York state senator who doesn’t believe that people are causing the climate to change,” said Niccoli. “There’s irrefutable science to tell us that this is true and the only way that we’re ever going to stop it is by changing our behavior.”

Calling it “the defining issue of our century,” she said “right now, in this moment, we have the ability to change the course of the future for the next generation and generations after that.”

On the inability of felony parolees to vote

“My approach to voting rights is always ‘more is best,’” said Niccoli, adding that she believes “right-wing extremists” have attempted to disenfranchise segments of the population whose vote they would be unable to win outright.

“We have a set of laws,” said Amedore. “We have election rules and we have individuals who, if they are found guilty, lose some of their rights. And it is a right for an individual to vote so we need to uphold the laws.” He received applause after he went on to suggest that any deviation would lead to illegal voting practices.

“We’re sick and tired,” said Amedore, calling Albany a “cesspool of corruption.” He said he favors pension forfeiture for legislators who have been convicted of crimes, term limits and more disclosure. Noting the recent indictments against leaders of both parties, he said, “We’re doing it, we need to do more.”

“I absolutely support pension forfeiture,” agreed Niccoli, “however, we have a huge systemic problem.” Using her opponent as an example, she said Amedore’s first priority is his job in real estate development and that he has accepted millions in donations from other real estate developers “to make real estate policy.” The answer, she said, is campaign finance reform and the elimination of outside income.

“Limiting outside income is a really important thing to do,” she said. “There’s nothing in your job as a state senator that doesn’t apply. Think about it. You’re making decisions about every corner of public life and so, if your job is real estate, for instance, how can you possibly remove yourself from those important decisions? How can you possibly make the strongest decisions for the community and not your own wallet?”

Amedore said that to limit outside income would be “the worst possible thing that we could possibly do.” He said the last thing Albany needs is more “career politicians and political hacks” for whom politics is their only career. “We need individuals who have real world experience.”

On closing the “LLC loophole,” by which campaign donors are able to get around a cap on contributions by forming a Limited Liability Corporation

“The Citizens United court case was decided by the Supreme Court, the highest court in the land,” said Amedore. “So the law is the law.” He questioned the idea of limiting campaign donations to limit corruption in government, saying, “In fact, it won’t.” He said, however, that he voted in committee to move the LLC legislation to the floor for a vote in the spirit of open debate and added that any LLC legislation would need to be balanced against other large entities such as downstate unions, “who skirt the limits all the time.”

Niccoli, who said Amedore has benefited from the LLC loophole, called his answer disingenuous and said, “I will put at the very top of my priorities, when I am the senator in January, closure of those LLC loopholes.”

The League of Women Voters, who organized and moderated the event, have declined to endorse either candidate, saying that they prefer to focus on voter education, but commended both for being willing participants in the event and said that they were pleased with the amount of people in attendance.